The MSI B360M Mortar is a small form factor, price-conscious motherboard that is still able to deliver on the promise of Intel’s historic top-end gaming performance despite its modest positioning. It may not have the specs-sheet of the more expensive Z370 or H370 motherboards, but it’s still got it where it counts.

But these are tough times for Intel in the gaming CPU arena, especially when it comes to mindshare of the DIY market. Along with most people in the media, we’re recommending that if you’re looking to build a gaming PC right now then you ought to do it around a new AMD Ryzen 2 CPU and any quality board in the AM4 range.

Check out our pick of the best Intel gaming motherboards available today.

That said, Intel’s processors are still the absolute best when it comes to gaming performance, however much the delta between them and AMD’s latest chips has been cut in recent times. So there is still the argument that if you’re just trying to build the best pure gaming machine around, and hang the rest of its computing performance, then you still want the Intel platform.

And if you’re looking to build an affordable purestrain gaming rig then the latest B360 chipset, coupled with a standard Intel Coffee Lake Core i5 chip, makes a lot of sense. This impressively affordable $99 (£91) B360M Mortar board from MSI is a great base for value-oriented machine, especially coupled with something like the six-core Intel Core i5 8400 which is only some $179 (£146). That will give you high-end gaming performance without the cost of a Z370 motherboard or K-series CPU.

But what’s the difference between the low-end B360 chipset and the Z370 or H370 variants? The B360 comes in the same lineup as the H370 and currently-on-hiatus H310 chipsets, which makes all three of them 14nm designs (as it was essentially the platform controller hub (PCH) meant to accompany the delayed/dead 10nm Cannon Lake desktop chips). The Z370, by comparison is a 22nm chipset, though that doesn’t seemingly have any impact on the power draw or TDP of the different silicon. 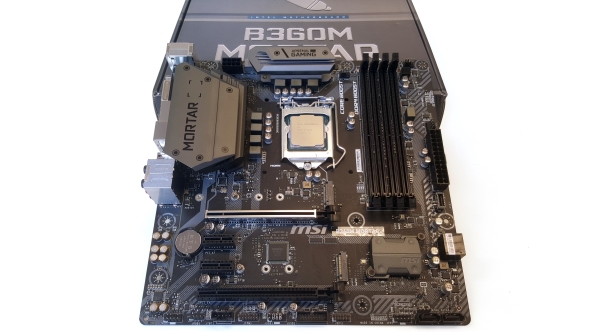 In terms of actual specs the big difference is in the number of PCIe 3.0 lanes the motherboard chipset is capable of supporting. The B360 can only cater to 12 lanes as a maximum, while the Z370 and H370 chipsets are able to address 24 and 20 lanes respectively.

The B360 also has access to fewer USB ports, with a total of 12 versus the 14 of the other two main Coffee Lake chipsets. But as it’s part of the new chipset revision it does have native access to the USB 3.1 standard while Z370 motherboards need third-party silicon to manage that feat. Z370 boards will, however, offer support for higher, overclocked memory that neither H370 or B360 boards can – the same goes for overclocked CPUs too.

But those are things which don’t have a great bearing on stock CPU or memory performance, so as a value proposition you’re not really missing out too much saving cash and aiming your wallet at the B360 board, especially when it’s as affordable as the MSI B360M Mortar. 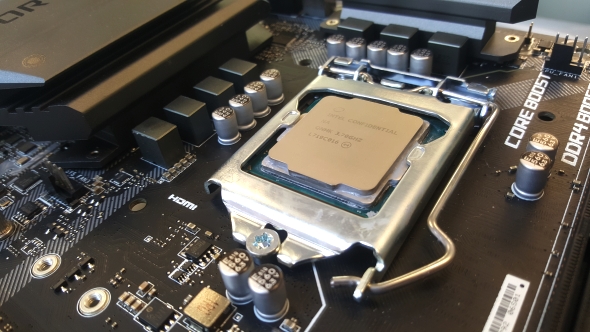 And, even though it’s well-priced mobo, it doesn’t look like a traditional ‘cheap’ motherboard. The PCB still feels solid – there’s no undue flex, in other words – and the chipset and power component heatsinks are nicely designed and unobtrusive too. Of course, a major failing is the fact that there’s no RGB LEDs burning out the retina of anyone who looks inside your rig. Sorry, sarcasm doesn’t really come across too well in text…

In terms of CPU performance we’ve been very impressed with how well the B360M Mortar compares to the rest of the Intel boards we’ve tested. Obviously most Z370 mobos are going to be capable of posting higher numbers, whether due to overclocking presets or manual performance tweaking, but at stock speeds it’s totally comparable with both H370 and Z370 chipsets. In fact we’ve seen higher performance than in the Gigabyte H370 Aorus Gaming 3 WiFi board.

In the gaming stakes, however, it’s a bizarrely mixed bag. The MSI board actually seems to deliver higher average frame rates than any of the H370 or B360 boards we’ve tested and the same is true of the Civ VI GPU performance too.

But then in the Civ VI AI test, and Doom’s Vulkan benchmark, it drops well off the pace. In the end then it kind of evens out, meaning overall you’re still getting around the same level of performance as the rest, which at this price isn’t bad.

Despite the fact we don’t necessarily recommend the current Intel platform for most gaming PC builds, if you are going for a gaming-performance-first build then the Intel Coffee Lake range is still the go-to brand. And within that MSI’s B360M Mortar offers a great-value motherboard that still has the skills to run your Core i5 chip at its best.