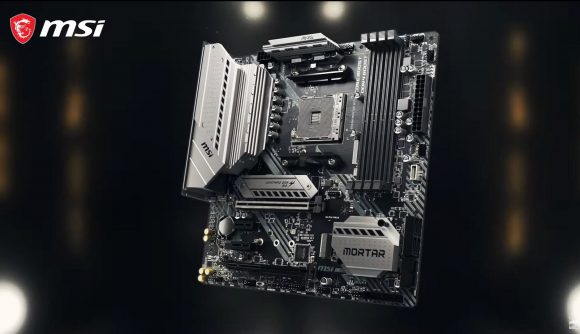 B550 motherboards are the latest iteration of mainstream motherboards for AMD processors and will be natively compatible with upcoming AMD Zen 3 CPUs. In short, they’re candidates for the most popular next-gen gaming motherboard, thanks to a great balance between features and price.

Far from only being useful for upcoming Ryzen 4000-series processors, the B550 chipset is also one of the best platforms for Ryzen 3000-series processors, too. Now, MSI has announced (via TechPowerUp) that it will be selling its own B550 motherboards bundled with AMD Ryzen 3000 CPUs, and that you can receive up to $60 USD in Steam wallet funds with select Ryzen CPU bundles, providing you order between June 16 (tomorrow) and August 31.

AMD B550 motherboards have only just begun their debut, unlike X570 motherboards which have been around for a while. And, now that AMD has confirmed that B450 and X470 motherboards will support Ryzen 4th Gen CPUs, there are more viable options than ever for those of you looking to build an AMD rig.

The B550 chipset will clearly be a more future-proof option than 4-series motherboards, especially considering it boasts PCIe 4.0. This new generation of the interconnect standard doubles the bandwidth of PCIe 3.0, from 8GTps to 16GTps. Intel’s new generation of Comet Lake processors still only supports PCIe 3.0, giving AMD the edge in at least one respect.

Of course, there isn’t currently much in gaming that can utilise the bandwidth of PCIe 4.0, but with teasers for next-gen console storage we’re certain that storage speed and bandwidth is going to be playing more and more of a part in our gaming lives as technology continues to advance, and as game developers continue to optimise for this new technology.

So, now that B550 motherboards are rolling out, you could definitely do a lot worse than picking one up for a new AMD build (perhaps one rocking the best gaming CPU, the AMD Ryzen 5 3600?). And with MSI’s pre-packaged offerings, the deal is even sweeter.