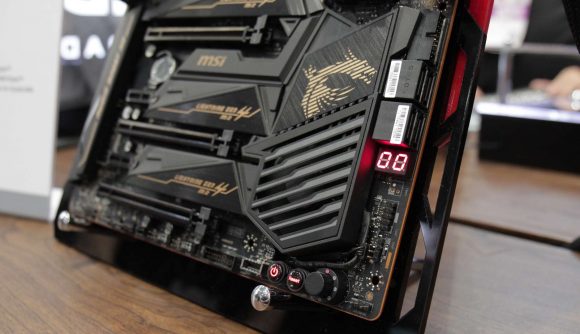 MSI is the first manufacturer to roll out a new BIOS update containing AMD’s AGESA 1.2.0.2 firmware, which should fix intermittent USB issues for those running a Ryzen 5000 CPU on a 500 series motherboard. The update is currently in beta, but installing it is a no-brainer if you’re already suffering with problems.

The issues have been around since Zen 3 processors launched late last year, but AMD only started investigating reports in February. The red team found a fix three weeks later, but the lengthy distribution time means it needs to go through motherboard partners before you can install it onto your system.

Fortunately, MSI’s been quick to the mark meeting the schedule, releasing the update for 21 of its motherboards since April 8. This is split across five X570 and 16 B550 variants, but don’t fret if you can’t see your model listed as there are plenty more updates on the way. Eventually, no one will be left out of the loop with the latest generation, X470, and B450 motherboards all getting the fix.

To check for yourself, just look out for ‘update to ComboAM4PIV2 1.2.0.2’ and ‘Improved USB device compatibility’ in the description and you’re good to go. Otherwise, here’s a rundown of motherboards and their corresponding BIOS updates:

There’s no word from Asus, Gigabyte, Asrock, or other motherboard manufacturers when their AGESA 1.2.0.2 update will land, but they shouldn’t be too far behind.