On July 7, 2019 AMD set about unleashing its Zen 2 architecture unto the client market in the form of its Ryzen 3000 processors. These chips have proven mighty popular amongst gamers and motherboard manufacturers, the latter providing stacks – literal stacks – of AM4 X570 motherboards ready to hop on the test bench for a round of testing. The first one on the pile: the MSI MEG X570 ACE.

It’s worth noting that the X570 chipset enters the market not as a replacement for either B450 or X470 chipsets but as a premium motherboard tier reigning from on high. Both 400-series chipsets remain in play should you decide against the improvements the red team has introduced with its latest in-house design. This puts particular pressure on the X570 platform to deliver, as it’s not only competing with Intel, but also the high-end AM4 motherboards of yesteryear – which are getting cheaper by the day.

Those of you considering an X570 pairing have likely fallen to the allure of PCIe 4.0, AMD’s AM4 platform marking the maiden voyage for the latest standard’s ecosystem of SSDs, graphics cards, and CPUs. In that regard the ACE’s native PCIe 4.0 support should see you through. But there’s plenty to shout about on the MEG X570 Ace beyond the inherent changes to the chipset platform.

The MEG X570 ACE is one of MSI’s finest X570 chipset models with a price tag of $395 (£360), and surpassed only by the ludicrously expensive MEG X570 Godlike. For this considerable investment you receive a motherboard with all the bells and whistles available to it.

The ACE is equipped with MSI’s IR Digital PWM, coming together for a total 14-phase (12+2) VRM with twelve 60A IR3555 MOSFETs keeping Vcore power in check. This is more than enough for your average user, not to mention AMD Ryzen 3000 isn’t much of an overclocker in our experience. This board got up there with the best of them at 4.3GHz all-core at 1.4375 volts, but no more. And few cheaper X570’s – or even the MSI Gaming M7 X470 for that matter – failed to at least get that.

A single heat pipe runs from the chipset to the VRMs via the first DIMM slot, ensuring chilly operation under load. As is required by AMD’s 12W X570 chipset, there’s a slight fan above the PCH. This whirs up awfully loud at startup, but for the most part is silent, in zero RPM mode, or near-silent under stress.

With I/O taking a front seat thanks to the investment on AMD’s behalf in the PCIe 4.0 specification, you can now load your motherboard up with three M.2. NVMe drives at once – two provided via the chipset and one direct through the CPU. Each of these three slots is capable of driving 4x PCIe 4.0 connectivity in tandem with a Ryzen 3000 processor and PCIe 4.0 SSD.

Right now that means one thing: the Phison PS5016 controller. In our testing this was put to good use within the Corsair Force MP600, it managing to tower above those that came before it in both sequential read/write and 4k read/write. Will gamers see much of that benefit? Unlikely. But avid content creators or professionals working with large files across media may enjoy the speed up.

On the brief aside of aesthetics, the MEG X570 Ace comes with “endless light effects” thanks to the mirrored RGB lighting design on the I/O. MSI has also seen fit to ditch its overwhelmingly dominant red and black colourway in favour of a less conceited and rather flattering gold and black design.

Yet all the RGB lighting in the world doesn’t make for greater performance – as evident in the results above. Motherboards have become a rather nuanced affair in recent years, with aesthetics, price, and ports pivotal to your average consumer’s decision making. Only the most enthusiastic among us will make the most of the extreme LN2 overclocking functionality that most high-end boards tout these days. 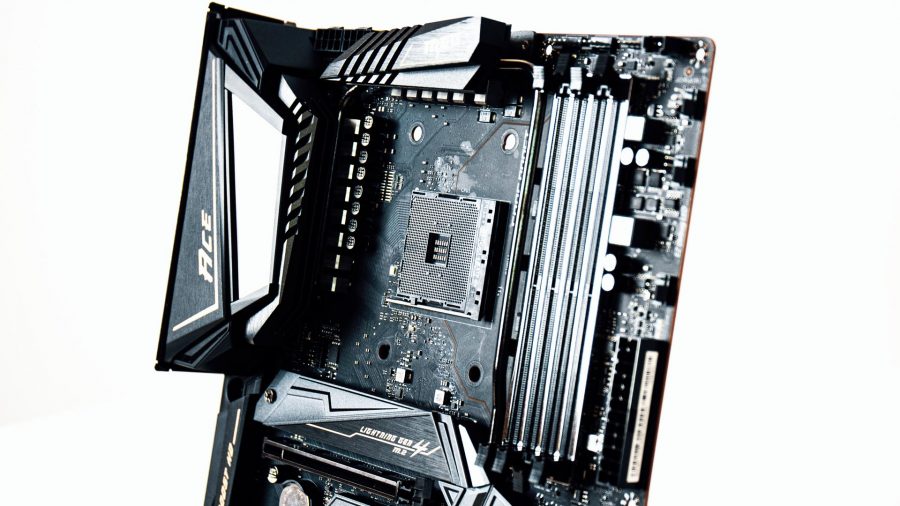 Where does that leave the MSI MEG X570 Ace? The answer is twofold. The X570 platform is itself a pricey optional extra. It’s not required, and it’s not all that beneficial to gamers either, but it does offer impressive bandwidth that some professionals and enthusiasts will find great use for – especially paired with high core-count processors such as the Ryzen 9 3900X.

The MEG X570 Ace is yet another premium on top of the high-end chipset. The Ace is grand, offering slick styling and unfaltering performance, but where does that get you on AM4? No further than an X570 that’s half the cost, or a value-centric B450 capable of nigh-on the same performance in all but synthetic SSD benchmarks. It’s a tough sell.

If you can’t settle for anything less than the latest tech, even if in name only, the MSI MEG X570 makes for a perfect pairing with the greatest Zen 2 chiplets, Navi GPUs, and PCIe 4.0 controllers money can buy. The age-old ‘future-proofing’ argument surely comes into play for many with PCIe 4.0, too. Yet at no fault of MSI, the X570 platform isn’t much of a holistic upgrade over its extant 400-series predecessors.

As an X570 motherboard the ACE is one of the finest. However, the X570 platform brings little of value to gamers, with the 400-series AM4 motherboards remaining a convincing alternative.