It may be mighty crowded but it looks like MSI have got designs on the gaming monitor market because they’ve started making their own MSI Optix displays to bundle with their desktops.-

There are a lot of other players in the panel game, check out our pick of the best gaming monitors around right now.

MSI have started a new promotion aimed at bundling their own MSI-branded gaming monitors with their Aegis gaming desktops. It looks like a case of the company dipping their toes in the water as we’ve been told that, while it is going to be promoted across both the US and UK, quantities will be pretty limited.

Which is a shame because they look like decent 27-inch 1080p screens. The 1800R curve doesn’t really do a lot for me on a 16:9 display, but MSI have made a smart choice in using Samsung-manufactured panels in their monitors.

They’re not of the Quantum Dot sort here, but they’re not far off the colour gamut of those new monitors. The MSI Optix G27C is running with a panel capable of 110% sRGB coverage, while the stunning Asus ROG Swift PG279Q looks good with a lower 100% sRGB colour saturation. The new Quantum Dot Samsung CFG70 screens are rated at 125%, for comparison.

I expect the MSI Optix G27C is using a VA panel for its native 1920 x 1080 resolution monitor. It’s got a grey-to-grey response time of around 4ms and is capable of refresh rates as high as 144Hz. Unfortunately it’s not a G-Sync screen, but there’s no mention of whether it’s compatible with AMD’s FreeSync frame-synchronising tech. Considering the MSI Aegis desktops are all running Nvidia cards it would probably make things a touch awkward to start promoting an AMD feature on something which they’re bundling with the GeForce-powered PCs. 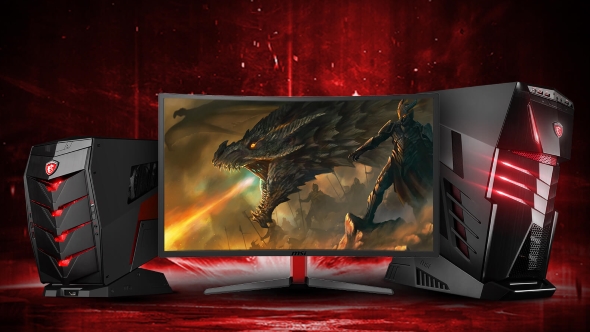 It may be that this is just a quick promotion and nothing more will come of it, but I can’t help but think we’re going to see either more MSI monitors pitching up in Las Vegas in January at CES or they’re going to launch a wider gaming brand sometime next year.

Asus have had great success with the Republic of Gamers (ROG) brand and Gigabyte looks to be trying to get in on the act by reportedly using the Aorus branding (previously just held back for their Aorus laptops) on its new motherboards and graphics cards. MSI, Asus and Gigabyte are a pretty competitive bunch so I wouldn’t be at all surprised if MSI matched them in a similar venture.

And it can’t have gone down well when it was announced recently that Asus would become the largest vendor of gaming monitors this year, with a market share of around 35%. MSI are going to want to steal some of that off one of their biggest competitors.