The original reference version of the AMD Radeon RX 5700 XT is the best-looking graphics card the red team has ever produced. The shroud’s curves might be a touch divisive – some have said it looks like the courier dropped the box on delivery, or like a crushed cigarette carton – but I personally love the sweeping lines and the otherwise super-clean aesthetic.

But, while it certainly looks great, it’s still very much an AMD reference blower-style cooler, and that means it’s typically hot and loud. As it ever was… Which means that we’ve been hanging out for third-party designs to hit the shelves with superior shrouds to keep things much cooler and a hell of a lot quieter.

Which is where the MSI RX 5700 XT Gaming X comes in. It offers MSI’s excellent graphics card cooling technology to give the Navi 10 GPU all the support it needs to keep delivering the impressive gaming performance which is putting them almost head-to-head with Nvidia’s RTX 2070 Super. And this MSI card is not a bad looker in its own right either…

The MSI RX 5700 XT Gaming X isn’t aping the curvy Radeon reference design, but has picked up the more general AMD styling used in the past, and is very deliberately creating a different look for its Radeon cards compared with the equivalent GeForce GPUs. The very boxy shroud aesthetic that’s still in play with Navi’s cut-down RX 5700 card seems to be one of the main design notes for this Gaming X, but that really works with the twin fan cooling array and brushed metal finish.

And it sure is a chunky boi too. It’s not quite a triple slot GPU, but it runs a lot taller than the reference card, and stands proud of the I/O bracket by quite some way. Because of that extra heft it also needs some serious structural support lest it tear the PCIe socket from your poor ol’ motherboard. And thankfully MSI has taken to shoring up its weighty graphics cards with a backplate and rigid frame beneath the shroud itself. 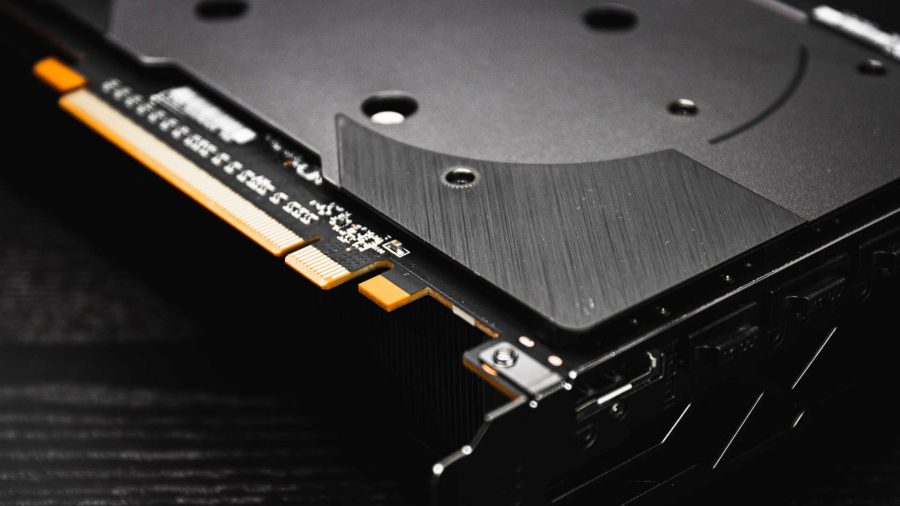 In terms of the underlying specs of the MSI RX 5700 XT Gaming X we’re talking about a moderately overclocked version of AMD’s Navi 10 GPU, with all the RDNA architectural goodness that brings with it. If you want a full breakdown of exactly what AMD has jammed into its latest gaming-centric GPU arch then we’ve got a RDNA architecture guide for your personal edification.

The basics of the Navi 10 GPU, and this RX 5700 XT in particular, are 2,560 RNDA cores, across 40 compute units, plugged into 8GB of GDDR6 memory across a 256-bit memory bus. Where MSI has made a difference is in the clock speed of the GPU silicon itself. The base clock has been boosted to 1,730MHz and the peak boost clock has been pumped up to 1,980MHz from the original card’s promised 1,905MHz. 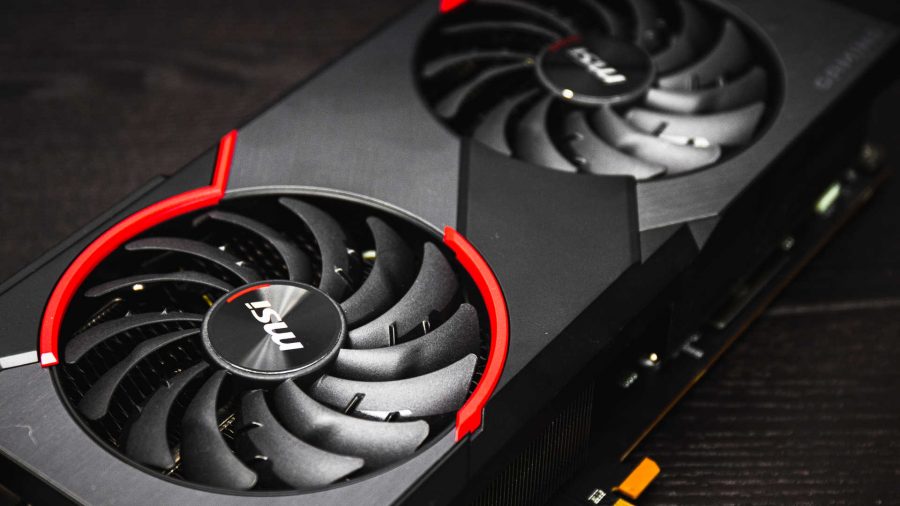 The advanced performance of the Torx cooling aides the GPU in maintaining this clock speed level, and means that it’s almost 20°C cooler than the reference card even with its higher frequencies. And it’s also mercifully quieter too when the GPU’s running at full chat, which you’d hope from the chunkier cooler with its fat heatsink and many-bladed Torx fans.

As with most third-party OC designs, the MSI RX 5700 XT Gaming X comes with the excellent 0dB mode. That means it’s fans don’t even get out of bed for less than 60°C, only spinning up once the GPU gets toastier during heavy use. It’s also sporting a Silent Mode, which does nothing to the actual clock speed, but does mean you can pick between having the card run cooler, but louder, or quieter and hotter.

Either way, it’s a relief compared with the noisy reference blower cooler. 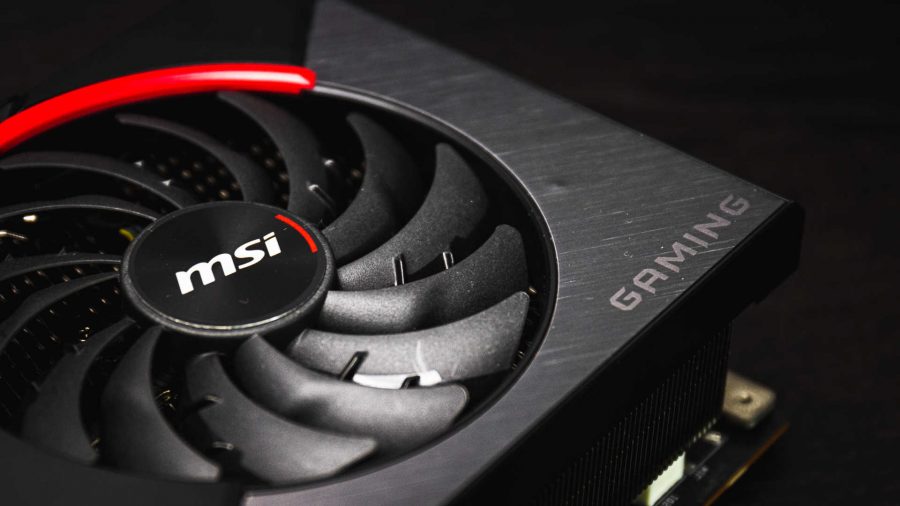 In terms of the MSI RX 5700 XT Gaming X’s performance it’s definitely superior to the standard RX 5700 XT, as you’d hope given the extra cooling, clock speed, and price. Across the board it’s pushing beyond what the already impressive top Navi card can offer, even past what we managed to get out of it with a little light overclocking.

And that also means it pulls in the RTX 2070 Super too, offering gaming performance that bounces between a little faster than Nvidia’s reference card and a little slower. Either way, it’s capable of being essentially referential, and for a little less cash too. The flip side of that is that you’re not going to get anything more out of MSI’s already balls-to-the-wall version of the RX 5700 XT GPU. 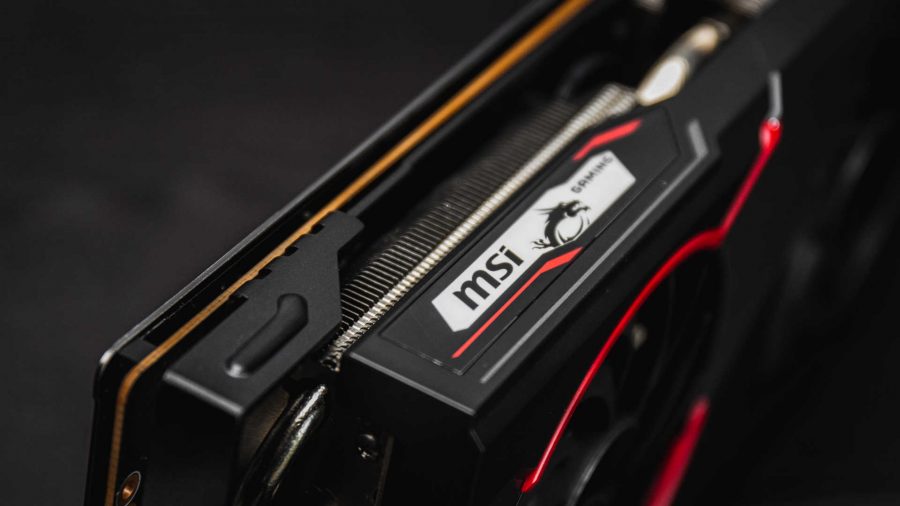 We overclocked and undervolted the MSI Gaming X and essentially got nothing extra out of it. The RTX 2070 Super, however, will take an overclock and keep its performance lead. And it can offer the still somewhat ephemeral benefits of real-time ray tracing in supported RTX games. But this MSI RX 5700 XT Gaming X is a card that can genuinely stand toe-to-toe with the impressive Turing GPU and come out swinging.

At $470-odd (£463) it’s still a bit cheaper than the Nvidia card too, and presents a more compelling allround package than the reference model RX 5700 XT. Is it worth the extra $100 premium? That’s tough to say, but it is the best the Navi GPU has felt inside a PC. However pretty I think that reference card’s curvy shroud is…