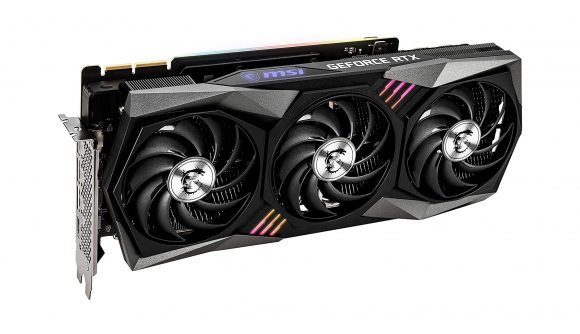 These photos indicate that the upcoming graphics cards have arrived at distribution centres, which usually happens just a few weeks before the release of new hardware, corroborating the reported late-May launch date.

The new GPU is expected to fill the price gap between its RTX 3080 and RTX 3090, and looks almost identical to MSI’s current RTX 3080 Suprim X. The non-Ti model has dual BIOS allowing for two modes, whether that’s full-performance or silent operation, and weighs in at just under a hefty 2kg with an included GPU bracket to stop any sag. It costs an extra $200 over the 3080’s $699 MSRP, so you can probably expect its Ti sibling to follow suit, with an MSRP higher than its rumoured $1,200 asking price.

An earlier leak revealed the clock speeds for the RTX 3080 Ti, which suggest it could perform similarly to the RTX 3090 with a bit of light overclocking. Even if the card is nerfed against crypto mining, the RTX 3080 Ti being a potential powerhouse means we can still expect demand for this GPU to exceed supply upon release.