March 4, 2021 Asrock has identified which of its Z490 motherboards will support PCIe 4.0

Intel’s 11th gen Rocket Lake processors are just around the corner with a March 30 release date, bringing with it PCIe 4.0 support. Yes, blue team members will finally be able to make the most of the best SSD for gaming with faster NVMe speeds up to 7000MB/s. If you’re upgrading from a 10th gen Comet Lake CPU, however, you might not need to swap your motherboard out for a new one to get access to the feature like we originally thought.

Although Intel hasn’t had the best track record with backwards compatibility, MSI’s been one step ahead with forward compatibility, confirming that all its Z490 motherboards now support the new standard. You’ll need to perform a BIOS update to unlock the feature, but this is a small price to pay to avoid forking out for an upgrade when you already own the best gaming motherboard.

As MSI confirms, PCIe 4.0 compatibility requires “several components on the motherboard” such as a “PCIe 4.0-ready clock generator, lane switch, redriver, PCIe slots, and M.2 connectors.” This means if you’re not part of the MSI crew and your motherboard’s manufacturer didn’t prepare its Z490 models, you might be out of luck, as no amount of software updates can make up for a lack of hardware.

Sure enough, Asus Z490 motherboards are confirmed to only support PCIe 4.0 in a single x16 graphics card slot, and since this doesn’t extend to the M.2 ports, you’re left with the choice of giving up the feature entirely or upgrading to a Z590 motherboard depending on what’s important to you.

Forward compatibility isn’t exclusive to MSI, though, with Asrock telling us its Z490 Aqua, Taichi, PG Velocita, Extreme 4, Steel Legend, and Phantom Gaming ITX motherboards all feature PCIe 4.0 support. Even Gigabyte might be getting in on the action, with its Z490 Aorus Xtreme webpage stating it has a “a fully PCIe 4.0 hardware design.” 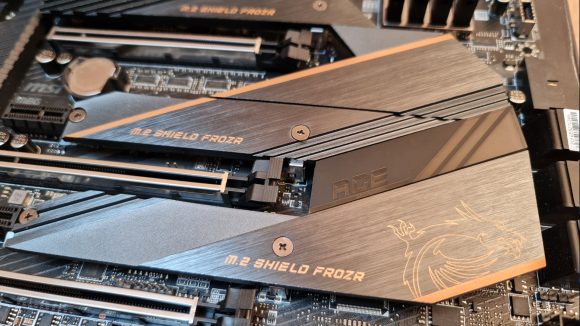 If you must upgrade to a Z590 motherboard or want to use it as the base for the best gaming PC, there are some benefits of the newer chipset alongside native PCIe 4.0, such as up to three USB 3.2 Type-C ports and ten USB 3.2 Type-A ports – up from six on the Z490. Some even include Thunderbolt 4 and WiFi 6E. If you’re wondering how to overclock your CPU and GPU, things will pretty much be the same as before, given there have been no substantial changes on that front.

Just because some Z490 motherboards can use PCIe 4.0 SSDs doesn’t mean you should. The increase in speeds are more noticeable in file transfers rather than in game loading times as it currently stands, but this could change as developers begin to utilise the new storage standard in the PlayStation 5 and Xbox Series X.