MSI has just released another Prestige 14 laptop, and this one’s in stunning Rose Pink. Looks pretty cool, right? The Taiwanese company may have a particular market in mind with this release, but I think it will find a good reception from just about anyone lucky enough to gaze upon it. It just looks that good. And, if you just really don’t like pink, you can still get it in White or Carbon Gray.

Despite its target market being content creators, the Prestige 14 can still pack a punch playing some games, even if that’s only a light punch in competitive titles such as League of Legends and CS:GO. More than a tap, less than a smack in the face, that’s what I’d say. 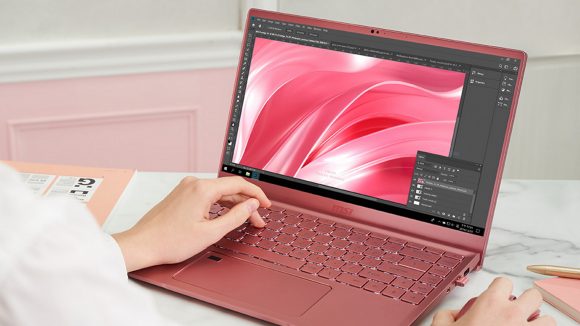 It’s running a discrete GPU, which is always good, but this GPU uses Max-Q technology to optimise for acoustics, thermals, and thin and light laptop designs, usually at the expense of some performance. This, on top of the fact that the GTX 1650 itself isn’t capable of playing the latest triple-A games at a comfortable frame rate, means this laptop might be better suited to less demanding games.

Its specs are as follows:

The CPU is actually from Intel’s 10th generation Comet Lake lineup, running on 6 cores and 12 threads, with a base frequency of 1.1GHz and a Turbo frequency of up to 4.7GHz. Its 16GB of RAM and NVMe SSD storage completes the unholy trio to make for one fast laptop.

All in all, then, MSI’s Prestige 14 is deserving of its new colourful pink coat. It’s definitely targeted more at content creators than gamers, but it can still play plenty of games just fine. Its sleek design, thin bezel, light weight, and high-quality IPS screen make for an impressive laptop – one you can now more proudly take out of your bag.