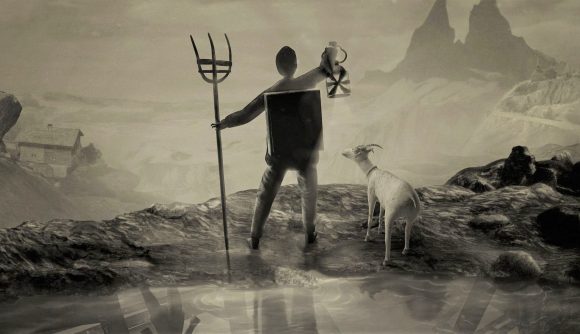 Mundaun, a spooky new title on the way from one-man developer Hidden Fields, has been announced as part of the Day of the Devs Summer Game Fest show. The upcoming PC game draws on hand-sketched visuals (get it?) and is inspired by “dark, mythical folklore from the Alps” from dev Michel Ziegler’s childhood home. You’re put into the shoes of a young protagonist who has to piece together the mystery surrounding his grandfather’s death – oh, and take on a “malevolent entity” in the process. Gulp.

The story of Mundaun, Hidden Fields’s first feature-length game, follows the death of the protagonist’s grandfather in a fire under mysterious circumstances. After travelling back to the eerie place for the first time since childhood, he discovers there’s something a little off with the people who still reside there – “something old and diabolical is haunting” them.

In your quest to work out what’s going on, you’ll get to embark on an “odyssey” up Mundaun mountain, and explore its other environments – “steep meadows to stony fields and snow covered peaks” – all of which have been hand-pencilled by Ziegler.

Along the way you’ll also have to tackle dangerous encounters and “handcrafted” puzzles, get behind the wheel, and snoop around areas packed with secrets, all the while balancing your actions against a “cause and effect” gameplay mechanic that slows you down according to how scary things get.

Mundaun, published by MWM Interactive, is due to launch in Q1 2021 and is headed to Steam. In the meantime, check out our lists of the best action-adventure games, best horror games, and best indie games to find some other goodies to try while you wait.