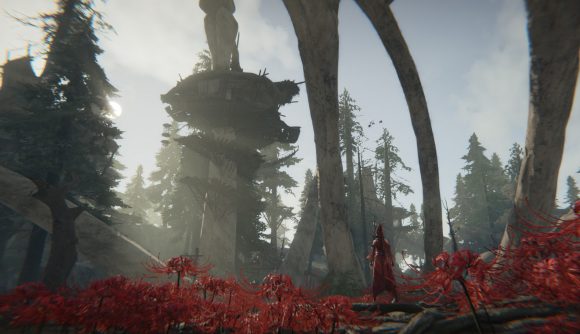 A new battle royale game has entered the chat, and it’s already popular. Naraka: Bloodpoint, a multiplayer game that favours melee attacks, and wall-running, just started its first open beta, and nearly 100,000 players are checking it out.

The “forerunner beta” started at 18:00 UTC, April 23, and 02:00 BST, April 24, and, at time of writing, 97,993 concurrent players were trying it at its peak, according to SteamCharts. This isn’t a surprise, since Bladepoint offers several novelties for the battle royale space. The map and characters are heavily influenced by Asian history, and the combat being more melee-focused sets it apart from Call of Duty: Warzone or PUBG.

It’s the debut project from developer 24 Entertainment, a Chinese studio. Two closed betas were run last year, leading to this. Evidently, people liked what they saw, and a few of them told their friends. Servers are active around the world, including Europe, US, and LATAM, and the team is offering prizes for the best clips posted by content creators. You can find all the details, as well as links to the best social hubs, here.

If you’re unfamiliar, rounds of Naraka involve 60 players across five classes, dropped onto MorareaIsland. Using parkour and grappling hooks, you maneuver around the map, trying to get close enough to hit your enemies using elaborate one-or-two-handed swords and weapons. Last one standing wins – simple as that.

24 Entertainment released a video preview of the beta:

You can sign up for everything through Steam, and you have until April 26 to give it a go. We’ve a list of regular fighting games, if you prefer your hand-to-hand combat a little more close-quarters.