In my experience, combat in Naraka: Bladepoint typically goes one of two ways.

In the first instance I take my time getting a read on my opponent’s weapons and fighting style, only committing wholeheartedly to the engagement when I feel I have their number. Whenever they land a strike they go for the basic LMB combo, which culminates in a telegraphed ‘focus’ attack that’s easy to counter – they’ve tried it a couple of times already so I’m confident I can tempt them into it if I hang around in the pocket. Sure enough, they get two quick slashes in and then light up blue, signalling the combo finisher is coming. I parry, punish, and then stun-lock them with my own combo. It’s beautiful. Minutes of tentative give and take, capped with a brutal, calculated flurry.

In the second instance I hear a grappling hook reeling in before I’m sent flying. Rather than landing a few feet away and dusting myself off, I remain on my side, suspended in the air while a half-naked beefcake buffets me around like a seal cub in the jaws of a killer whale.

Irrespective of the fact that I win in the first example, it reflects Naraka: Bladepoint at its absolute best. Reactions and practiced timings matter, but it’s wit that sets up the killing blow, and in isolated fights against an equally skilled enemy it’s hard not to find yourself falling for this melee-focused battle royale game. Like a perfect parry in Dark Souls PvP, or Sekiro’s precision duelling, landing a counter in Naraka feels like you’ve just torn down some illusory wall and broken the game. The fact that a counter also knocks your enemy’s weapon flying is the icing on the cake.

Unfortunately, the road to mastery is paved with a lot of frustrating and frankly obnoxious mechanics that will either make you want to persevere or uninstall. 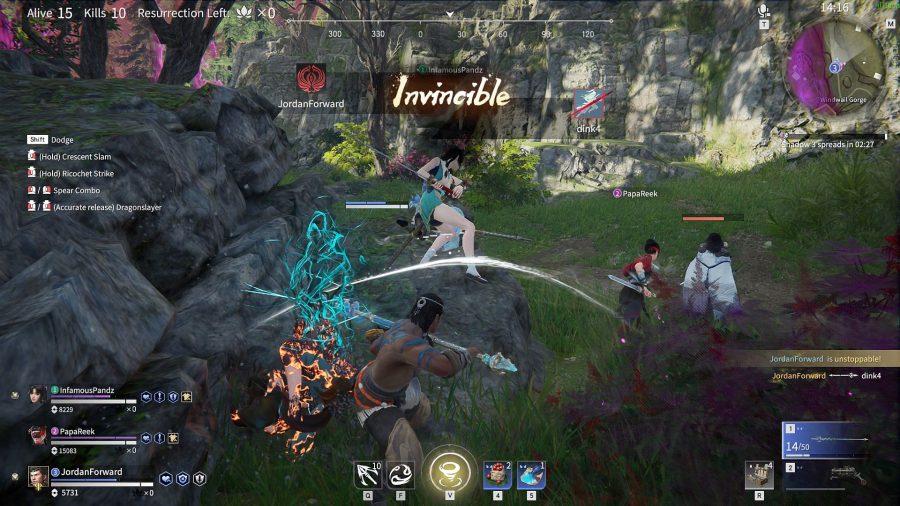 The grappling hook, for example, can be used to lock onto a player and zip over to them, delivering a strike as soon as you reach them. There’s no cooldown on this item, and you can carry well over ten grappling hooks, so you’ll have fights in which you’re constantly being dragged back into range by your opponent and then assaulted with a stun-locking combo. Every time you manage to get some breathing room you’ll hear that spooling sound again, and sure enough you’re right back in the thick of it.

There's no way to outsmart a more skilled enemy, which feels odd in a battle royale

There’s no block. Instead the only way to beat a combo is to counter a ‘focus’ attack, which requires impeccable timing for a range of combos across several weapon types. To escape a combo without parrying, you can either double-jump away, dodge-roll, or, depending on the hero you’re playing, use an ability. Trying to run away is almost completely pointless – see my earlier grapple gripes – and evasive moves feel inconsistent.

So if you get attacked you pretty much have to take the fight, and if you want to win then at the very least you need to be comfortable countering. Only then will your ability to mix combos and outwit your opponent start to make a difference. And that’s where I think Naraka falls short: there’s simply no tactic or strategy to circumvent your opponent’s raw fighting skill. I know that doesn’t sound like a bad thing, and of course it’s crucial in the tense duels of fighting games like Guilty Gear Strive and Mortal Kombat 11, or in the poised competitive environment of tactical FPS games like CS:GO and Siege. But it feels a little out of place in a battle royale; this genre has always made room for asymmetric tactics by which the inventive can level the field with the highly skilled, such as sneaking, sniping, or winning the loot game. 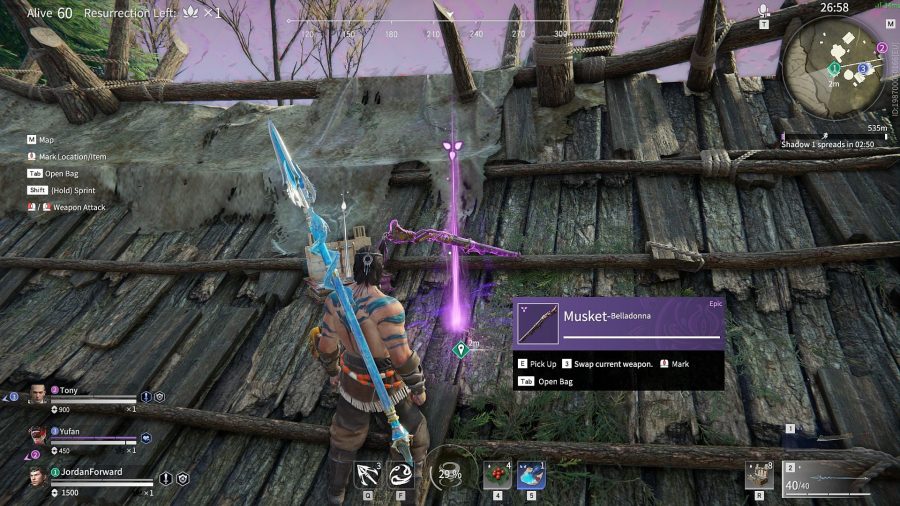 Ranged weapons exist, but they’re only effective in group fights, and then they just feel cheap. Ambushing doesn’t work either, which is a shame because Naraka’s parkour system lets you hide on the ceiling like Spider-Man. Ambushes end either with the zone pushing you out of your hiding spot, or with you realising far too late that you still have to actually win the resulting fight.

What turns this steep learning curve into more of a sheer cliff face is that there’s also a leveling system for every character, with not only skill variants locked behind hero level, but also raw stat boosts such as stamina and grapple reach.

To the credit of the development team at 24 Entertainment, Naraka has a lot of training tools to help you get to grips with dueling. I urge you to jump in and practice combos and parries against a bot, which you can outfit with any weapon and even set their behaviour so you can hone your timing. Combat really starts to click in a match of Bloodbath, Naraka’s version of deathmatch. With endless respawns, a small arena full of players, and a good starting loadout, all you need to worry about is winning fights. Less than a handful of competitive multiplayer games have quality practice features like this, and it’s a wonderful addition. 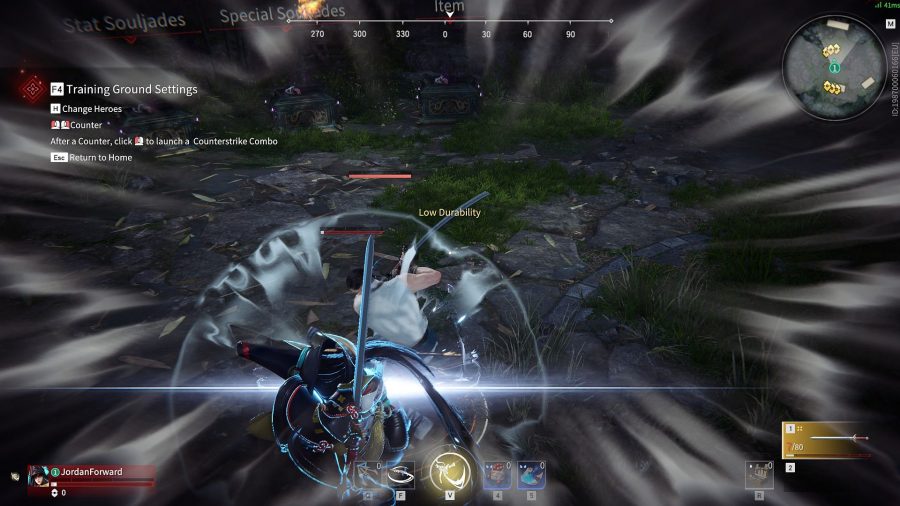 The roster of heroes adds even more depth to combat, with a range of attacking, support, and defensive skills represented across the seven characters. My favourite is Yoto Hime, who can throw out a spinning blade that hangs in the air for a few seconds, dishing out chip damage and stun-locking whoever gets caught in the cyclone. It’s a great asset in a pinch as you can throw it out to lock an onrushing enemy down, giving you enough time to either escape and heal, or stick around and launch straight into a combo. Skills are powerful and they do get kills, but compared with standard combos and focus attacks they feel additive rather than game-changing.

Naraka is clearly a very good fighting game, so it’s a shame that a deciding factor in duels is often how stable it is. Lag spikes happen regularly, and completely ruin fights. With no region-lock in place you’ll encounter plenty of high-ping players, which makes for a miserable experience when timing is everything. I also find it odd that, after almost 30 ranked matches, I’m still running into trios that are so much better than my team that they can wipe us out in seconds. 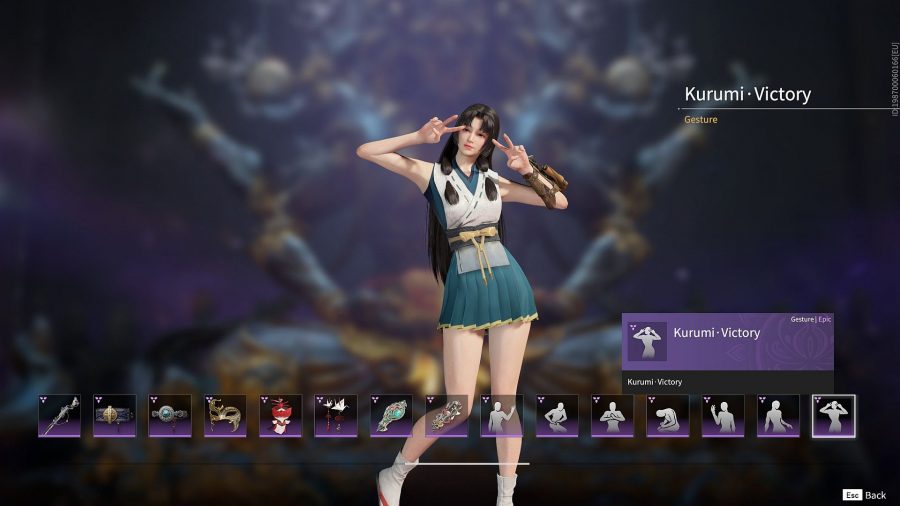 My final set of quibbles concern the game’s approach to customisation and monetisation, and I phrase that in such a rigid and stodgy way because we’re about to get a little serious.

Naraka: Bladepoint is a $20 game, and at launch it’s fully loaded with loot boxes, a battle pass, daily and weekly challenges, and a walk-in wardrobe’s worth of cosmetics including face coverings, hairstyles, weapon skins, ornaments to strap onto your waist, and even different grapple hook effects. It’s astonishing then, that among all these nonsense items, there are absolutely no afro hairstyles to choose from. There’s one with a few dreadlocks, but they sit alongside smooth, glossy hair.

It all feels a bit gross. A ludicrously detailed character creator with the option to import your own face into the game, hundreds of cosmetics you can spend money on, but no natural hair for Black characters?

And that’s Naraka: Bladepoint in a nutshell. Deep, deep wells of complexity and nuance, tainted by glaring oversights.

If you can move past those issues then you’ll find a challenging, constantly rewarding combat system that successfully captures the feel of martial arts movies like Hero and Crouching Tiger, Hidden Dragon. But that’s a pretty big ‘if’, and I can recall many moments when – had it not been for the fact that I’m reviewing it – I would’ve bounced off because of either the challenge or the technical issues.

For an original take on battle royale and a truly special martial arts combat system, Naraka is worth checking out. But between stability issues, off-putting monetisation practices, and an unpalatable learning curve, there's plenty that gets in the way of the fun.