How do you top getting Spike Lee to direct your game’s career mode? Easy, get a bright-eyed and bushy-tailed award-winning actor like Michael B. Jordan to star in the next year’s instalment. Jordan will accompany the player’s MyPlayer throughout the career mode, playing the role of rising NBA star Justice Young, which is about as ridiculous as names come. Justice is a friend and support system for your MyPlayer, helping you navigate the life of a professional athlete and factoring into choices the player must make both on and off the court.

Related: for only the finest experiences, seek out the best PC games.

Michael B. Jordan has an extensive resume for such a young actor, appearing in Fruitvale Station, Creed, Fantastic Four as well as TV shows Friday Night Lights and The Wire. “NBA 2K17 was the perfect platform to connect with a new, unique audience and challenge myself to expand my abilities as an actor,” said Jordan in a 2K press release sent out today. “I’m humbled at the opportunity to help influence a franchise that I’ve been a passionate fan of since its first release.”

Sure, he sounds excited in the press release, but here he is looking sassy in-game. 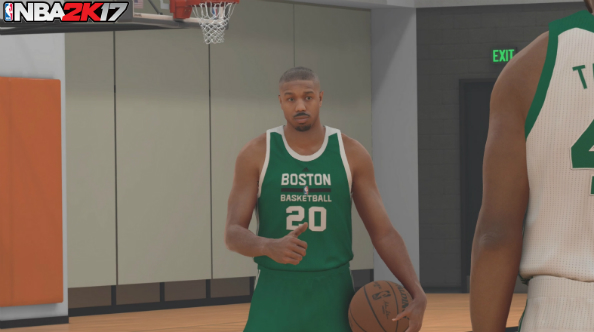