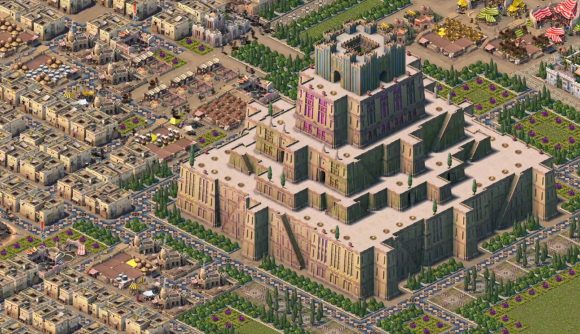 It’s party time in the Fertile Crescent, or it’s about to be, anyway. Mesopotamia-themed city-building game Nebuchadnezzar is about to see its long-awaited 1.3 update, which the developers have revealed will arrive February 16. With it comes an impressive list of new features and systems that will make building the biggest temple in the land a lot more interesting.

One of the major new systems coming to Nebuchadnezzar with the 1.3 update is deities. Your city will have a patron god, and you’ll be able to select up to three more for your citizens to worship. Each one comes with a set of associated bonuses, but the strength of those bonuses will depend on your city’s relationship with the appropriate god. In all, developer Nepos Games says there will be more than 40 to choose from.

So, how do you maintain your relationship with the local pantheon? For that, you’ll want to hold festivals – another new mechanic arriving in update 1.3. Festivals are held by spending goods, which you’ll pick from a new menu. The quality and variety of the goods you select for use at the festival determine the festival’s level, which in turn determines how happy it makes the god in whose name it’s being held.

The developers have also done a pass on the interfaces for work buildings. Once 1.3 arrives, you’ll be able to see production and consumption going on in each building as separate progress bars, which will let you tweak and optimise their workflows without as much guesswork.

Finally, decorations like mosaics will be customisable, with selectable colour schemes so you can give your city a more unified look.

Head over to Steam for more information on the update.