Warhammer 40k’s hive cities are among my favourite settings in all of sci-fi: planet-sized complexes stretching from lightless underground industry to spires that pierce the sky. They add new meaning to the phrase ‘living on top of each other’ as billions of humans huddle together against the encroachment of Chaos and hostile alien species – including the cultists and criminals rotting the cities from within.

There’s no better microcosm of the overgrown logistical nightmare that is the Imperium, grinding souls away just to keep the lights on. So who’s responsible for maintaining order in this lawless chaos? Well, you. Kind of. In Necromunda: Hired Gun you play a nameless bounty hunter tracking the baddest of the bad in the ‘underhive’ of Necromunda, a grimy hive city in which Warhammer publisher Games Workshop set a hit tabletop game back in the ’90s.

One day things take a turn for the worse. While searching for the murderer of a guild member, your comrades are killed by a shadowy assassin and you are left for dead. The famous bounty hunter Kal Jerico pulls your feet out of the fire and together, with a dome runner (basically a guide to the underhive) and your trusty mastiff, you set about unravelling a gang conspiracy led by the notorious Silver Talon.

In general, Hired Gun’s plot and dialogue is all over the shop. By the end of the game I couldn’t even remember why I was hunting Silver Talon in the first place. The hunt does provide an excuse for Hired Gun’s gameplay loop: you do a job, you get paid, you use the cash to buy upgrades to make you better at doing jobs. These could be sabotaging gang supplies, defending a stronghold, or taking out a target, but as with the main campaign, you can bet that whatever you do will involve plenty of killing. 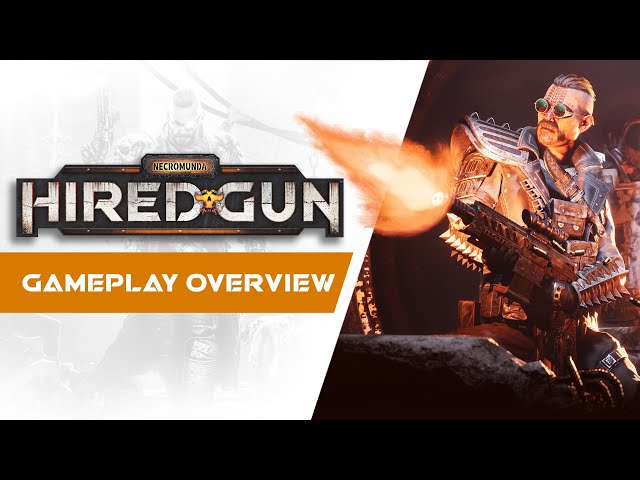 The bullet-hell gameplay that ensues is where Hired Gun is at its strongest. You dash between enemies, blazing away with your arsenal, while using bionic abilities to slow time, fire ordinance, create energy explosions, auto-target, or enter a knife-wielding melee rush. The guns are weighty and powerful and I especially appreciate how the bolter feels as you pulp opponents with its heavy shots. You can also execute enemies with a melee finisher if you get in close, though these animations are somewhat janky.

I was also disappointed to discover that the mastiff is often more trouble than he’s worth. I’d summon him in a fight and direct him to attack enemies, but a lot of the time he’d get stuck or lost – Hired Gun has many platforms to jump between, and the mastiff’s pathfinding stuggled to cope. He can be useful to draw enemy fire, though, and you can also purchase upgrades that make him look like a robodog. 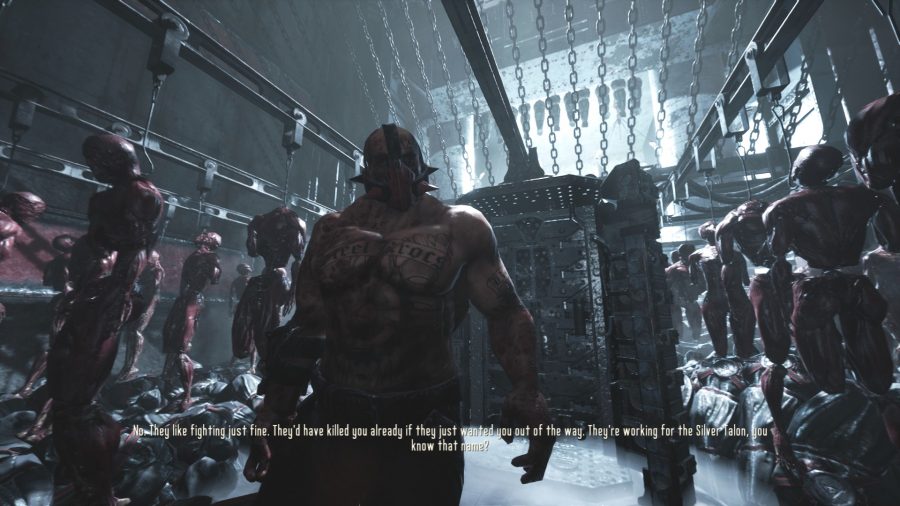 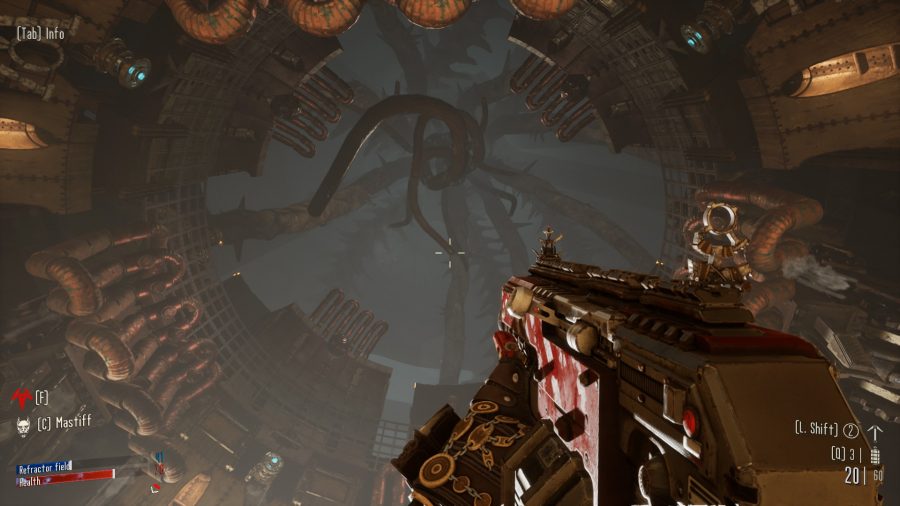 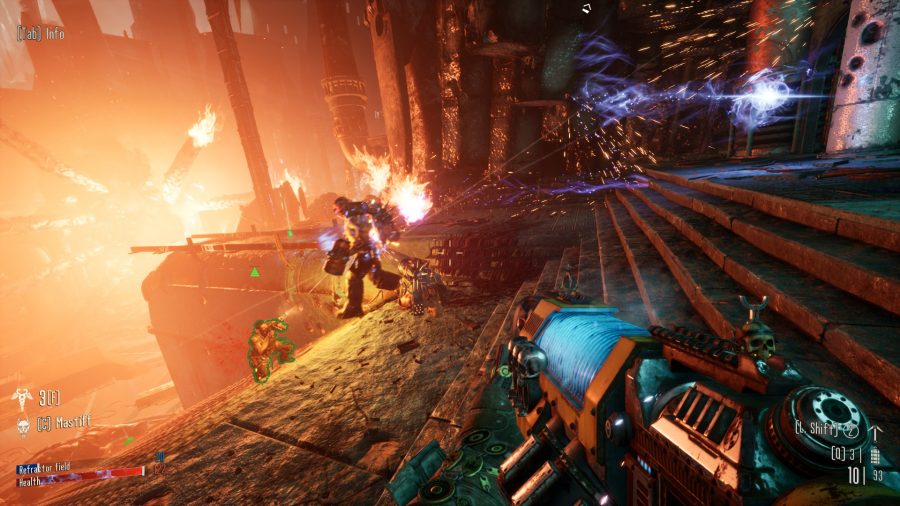 My favourite fights in Hired Gun are the arena and boss battles, since aggressive single entities force you to move more, and the damage they inflict means you have to hunt other enemies for pickups to refill your shields. These were the fights where I felt that bullet-hell flow of shooting, movement, and ability use was at its smoothest.

These battles also benefit from the most setup, which is effective in lending them a sense of occasion. Whether it’s fighting a robot on a giant underground train, evading a pyromantic Escher in the core of a sumpbeast-infested power plant, or going toe-to-toe with a Goliath in a still-operating munitions factory, Hired Gun’s set pieces are one of its real strengths.

Once the dust settles you return to Martyr’s End, a settlement that serves as your base between bounties. Each of its vendors has a wonderful character design, especially the dome runner. 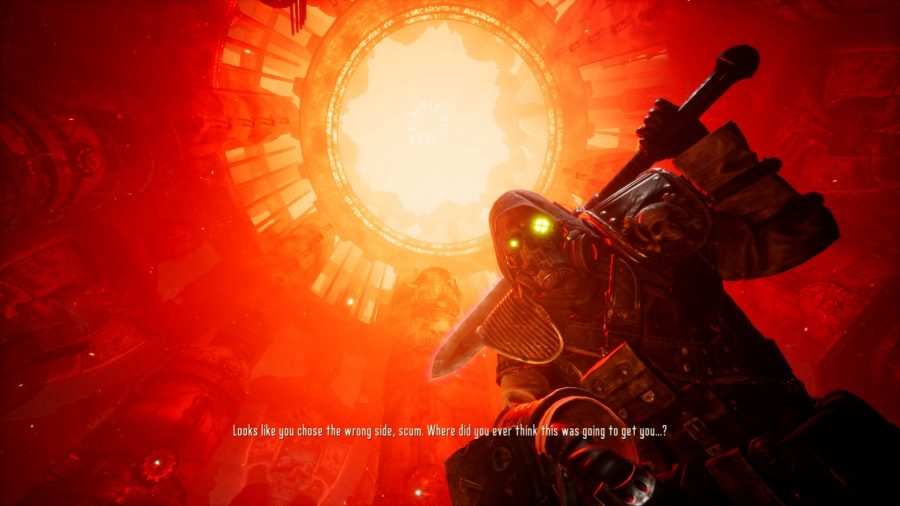 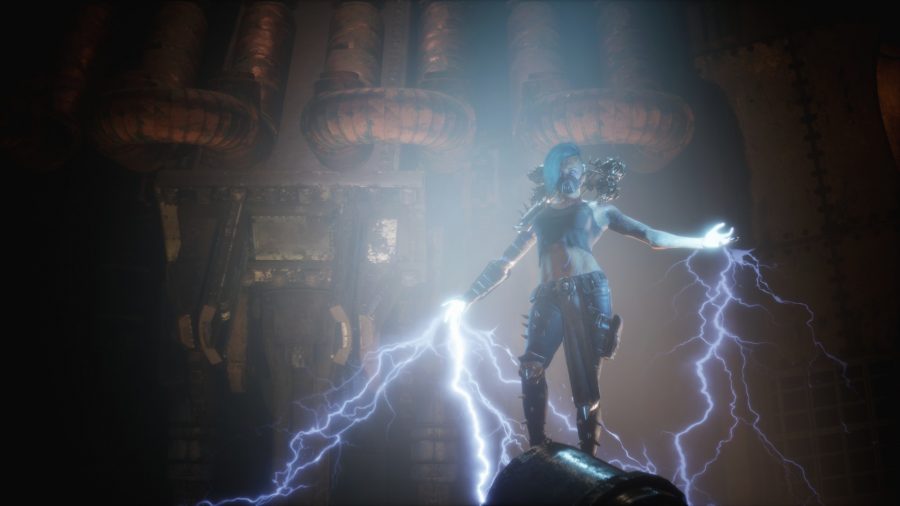 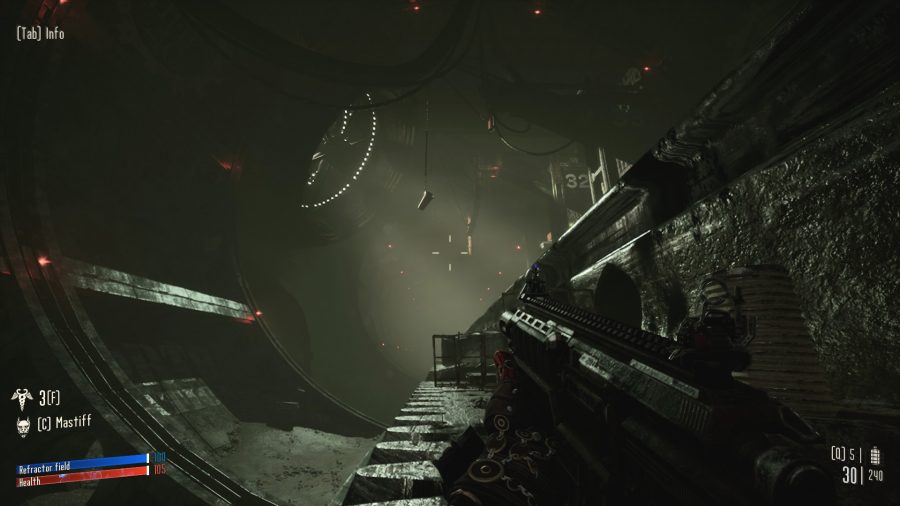 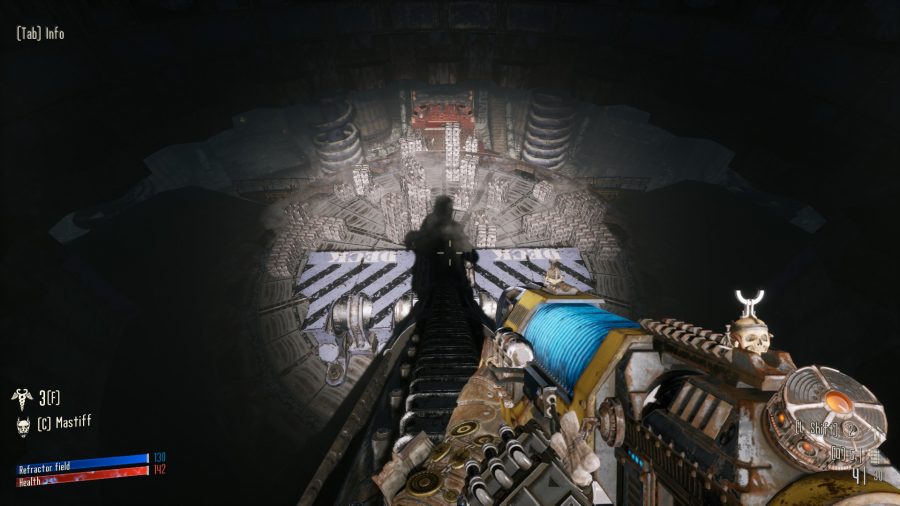 But just like Space Hulk: Deathwing before it, Hired Gun is a mixed bag. It lacks a character and equipment menu, for instance, and its customisation options are mostly stat-based. It doesn’t feel like you can change much of interest in your build – either when modifying your weapons with lucky charms or aerotech, or equipping armour or status items. Without an equipment menu the post-job item screen is also unnecessarily confusing and it took me way too long to realise that it wasn’t the place to change my loadout.

Hired Gun is a fairly fun shooter, but a number of under-realised or poorly implemented elements get in the way of that fun. Its lacklustre dialogue and straightforward story also can’t help but feel like a poor showing when you consider Necromunda’s rich, fleshed-out setting. 40k’s characters and stories are among its strongest assets, and Hired Gun doesn’t take as much advantage as it could. On a more subjective note, it also feels like it’s trying too hard to be gritty, filling its maps with corpse assets and placing you in the shoes of a character who, despite excellent voice acting, is only there to be gruff, tough, and kill people in increasingly brutal ways.

A fairly fun bullet-hell shooter frustrated by under-realised features and missed narrative opportunities. Ultimately, Hired Gun falls into a pitfall all too common to Warhammer adaptations: that of only ever feeling skin deep.