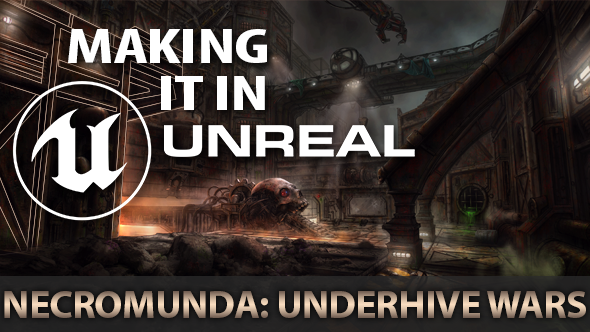 The tabletop Warhammer games that have translated best to our medium are the skirmish spin-offs – the smaller battles played out on the scale of XCOM. Close enough to see every last stud on an Underhive ganger’s leather armour, and count the teeth on their embossed skull shoulderpads.

Love a bit of turn-based tactics? These are the best strategy games ever.

That’s exactly what Montreal indies Rogue Factor specialise in. They made their name on Steam with skaven showdowns on the streets of Mordheim, and have now been entrusted with the adaptation of the 41st millennium equivalent: the beloved Necromunda.

Like Mordheim, Underhive Wars is about turn-based tactics and permadeath. Gangers will persist between battles and wear the consequences of their bad dice rolls on their sleeves. That’s if they’re fortunate enough to keep their sleeves – only the luckiest have their dismembered limbs replaced with bionic prosthetics.

Those individualised, tightly-focused fights are juxtaposed with ginormous environments – sprawling foundries in the military-industrial heart of the Imperium. It’s the technical implications of those environments that Rogue Factor are wrestling with now, in pre-production. 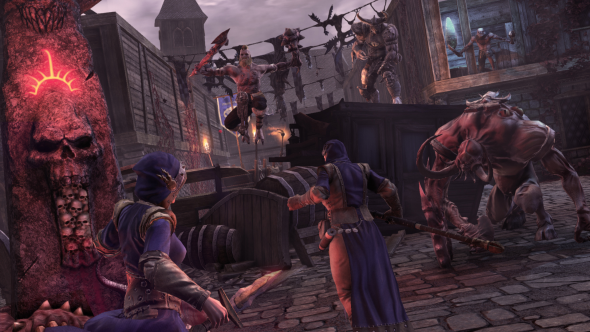 While the studio made Mordheim in Unity – and Necromunda builds on the mechanics and lessons of that game – they’ve switched engine to Unreal 4.

“It’s working really well,” producer Guillaume Voghel reveals. “There’s a lot of confidence in having an engine that Epic is actually using on a game. It’s not just thinking about what we’ve learned from Mordheim, taking the tech and trying to shoehorn in the features. Everything for Necromunda is going to be made from scratch in the proper way. It’s going to be a much more solid experience.”

The move to UE4 was first prompted by Necromunda’s unique demands on level design. “When we wanted to go in a more vertical aspect with bigger maps, that’s something we decided to look into, because Unreal is a really good engine for doing bigger environments,” says Voghel.

On the tabletop, Necromunda games were distinctive for their verticality: networks of layered plastic platforms, from which gangers traded bolter fire.

“It was really famous for that,” points out Bordeleau.

“Verticality was a new thing in the tabletop version, and we really want to push it further,” adds Voghel. “You’re going to encounter maps where height has a lot of importance, skills that have a lot of impact on height. The verticality of a shooter is going to be a lot explored in that regard.” 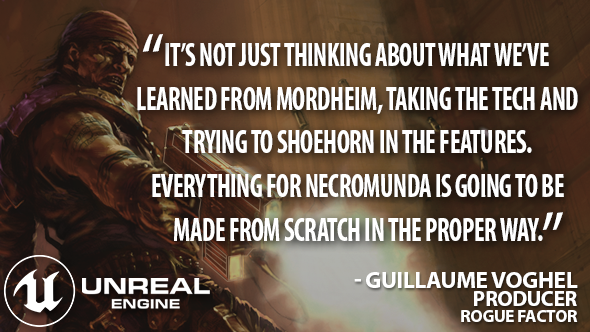 Not only are Necromunda’s battlefields tall, they also play with scale. These are, after all, the factory floors where the Imperium builds torpedoes for kilometres-long battleships.

“Your character will feel super-small compared to one big missile,” Bordeleau promises. “The bigger nature of those aspects is super important to us in terms of gameplay and perception.”

Rogue Factor have taken it upon themselves to provide context for the larger 40K universe. Where a frigate in Battlefleet Gothic might not convey its size against the blank backdrop of space, in a Necromunda map a single shell casing from one of its smallest cannons can be rendered ten storeys high.

“This is not something you see in a lot of videogames which are grounded in reality,” says Voghel. “We’re still finding new things to blow up in proportions, but it’s a very exciting thing to find this little secret garden of disproportionate weapons and equipment.”

Once you’ve worked out how to build a big space, there’s a new problem: filling it.

“We’re trying rethink how we always thought of building a game,” Voghel explains. “Because we were used to, ‘OK, you’re doing a door and a wall, it’s very proportionate’. But now it’s trying to think, ‘OK, we’re not doing a door, we’re doing an entire building’. We need to find tricks to make sure that it makes sense.”

For instance: rather than task a staffer with laying down miles of piping all over the maps of Underhive Wars, Rogue Factor have put together their own procedural generation tools in UE4 for that purpose.

“[There are] less smaller details, but a lot of repetition of big details,” says Voghel. “And that’s something that Warhammer is absolutely amazing at – it’s a lot of repetition of simple details but that gives you a complex shape. It’s very difficult in terms of art production, but we think it’s going to resonate really well with players. If we get there, we can get out the champagne.”

“It’s a big challenge,” Bordeleau admits. “We’re still in pre-prod, but we’re getting there.”

In this sponsored series, we’re looking at how game developers are taking advantage of Unreal Engine 4 to create a new generation of PC games. With thanks to Epic Games and Rogue Factor.