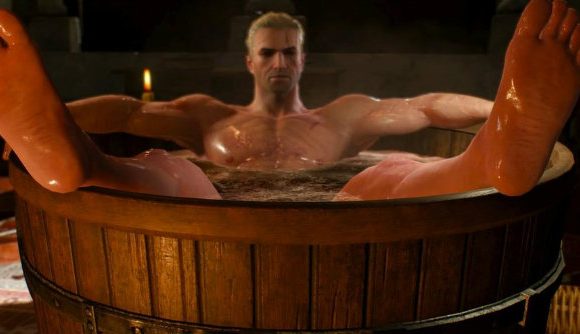 Over the years, the Witcher franchise has certainly earned a somewhat adult reputation. The first Witcher book I read literally opened on a sex scene, and the first game has a troubling system where you collect cards depicting the women Geralt sleeps with. The Witcher 2 is a little more chill on that front, but by the time The Witcher 3 rolled around, multiple romance options were joined by some extremely bloody violence.

The point of this romp through Geralt’s NSFW outings is to remind you that the series has never been even remotely PG-13. Which is why it shouldn’t come as much of a surprise that the upcoming Netflix series is taking a very similar tone.

Last night, series showrunner Lauren Hissrich tweeted to say that she had been watching a cut of the show with her son, Ben. The verdict: “this show is not for for 5-year-olds. Like, really not.” That bodes well for fans of the series, as I wouldn’t expect a Witcher game to offer anything else. The tales of a lusty, monster-hunting mercenary (and his even more lusty friend) might not benefit from being kept SFW.

It is, of course, also worth remembering that The Witcher 3 was rated M by the ESRB in the US and an 18 by PEGI in Europe, and I’d imagine the Netflix show will maintain a similar rating.

Just watched a cut of #Witcher with Ben, and the verdict is in: this show is not for 5-year-olds. Like, really not. #TalesOfAWorkingMom

The Witcher Netflix series is due out sometime this year. While we don’t have a date, the suggestion that Hissrich is watching a full cut of an episode suggests that most, if not all, of the shooting is out of the way, so perhaps we’ll learn more relatively soon.

Wind’s howling: Will there be a The Witcher 4 release date?

With Henry Cavill in the title role and Hissrich well and truly behind her leading man, I’m definitely looking forward to a new take on the franchise. That said, I probably won’t b watching any of it in the PCGN office.