It might look like a very angry Roomba, but the Netgear XR500 Nighthawk gaming router offers in-depth control over your gaming experience, and sweet relief from incessant networking errors that plague even the pros. But is it really necessary for the most avid gamers?

Not even the humble internet box manages to escape the gamer’s Midas touch, which is both a blessing and a curse for the Netgear XR500. On the one hand, the router’s gaming-focused DumaOS puts your regular package router software to shame. On the other, you can certainly pick up bigger and better hardware for similar, or potentially less, collateral.

Complete your setup with the best gaming mouse money can buy in 2018.

If you want a router that looks like a futuristic Robot Wars contestant and are willing to spend a hefty sum on total networking control while gaming, then you needn’t look much further than the XR500. For the $298 / £240 you’ll need to drop on the Netgear XR500, you’ll receive AC2600 dual-band connectivity powered by its very own dual-core 1.7GHz processor.

This router is MU-MIMO compatible, which means you can have multiple devices to communicate with your router at any given time, and is actually ‘Fortnite optimised’ according to the Amazon sales page. 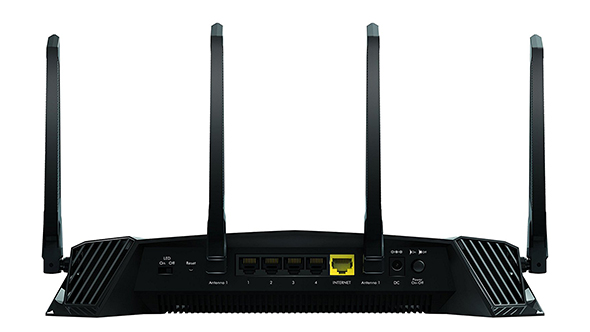 On the back are four gigabit ethernet ports, a single WAN port, and a little LED on/off switcher. These are accompanied by two USB 3.0 ports on the side to share connected storage as a makeshift NAS drive using Netgear’s ReadySHARE tech, or plug in a network printer if required.

What the XR500 is missing, however, is a basic modem. That turned out to be a bit of problem for my setup process, as – at least in the UK – many internet service providers block you from using their packaged router/modem combos as straight up modems. If that’s the case where you are then you’ll have to source your own dull internet brick at further expense.

As for connectivity, the XR500 is a strong performer – I’ve had no noticeable signal dropouts or disconnects since setting the system up. However, the range isn’t spectacular. This is entirely dependent on your situation and building layout, so mileage may vary, but I found the BT Smart Hub struggled to throw a signal up one floor and through one thick wall, and the XR500 only managed to achieve slightly better results at the same range. 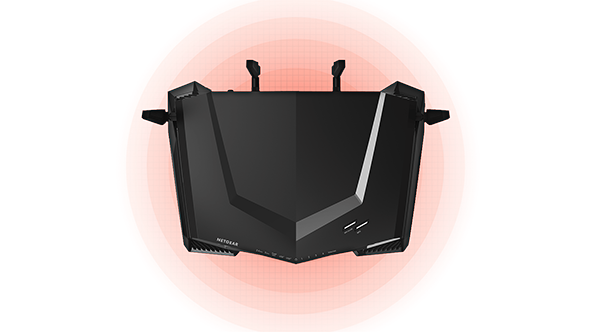 Despite only a marginal improvement in range, the consistently stable connection makes for a notably less frustrating user experience.

The main selling point of the XR500 has to be the software. Without it, it’s an incredibly similar unit to Netgear’s own Nighthawk X4S D7800… but then again that has a modem, and at only £200 seems like a better deal on the surface. There’s also the apparently identical X4S R7800 without a modem for only $186 / £153, or the significantly better spec Tri-band Nighthawk X6S router for $229 / £223. Let’s hope this software is worth it, huh?

What I can say is that the software is, hands down, the best I’ve ever personally come across in a humble router. Netgear partnered with NetDuma, creators of the R1 gaming router, to bring its DumaOS router operating system over to the XR500. 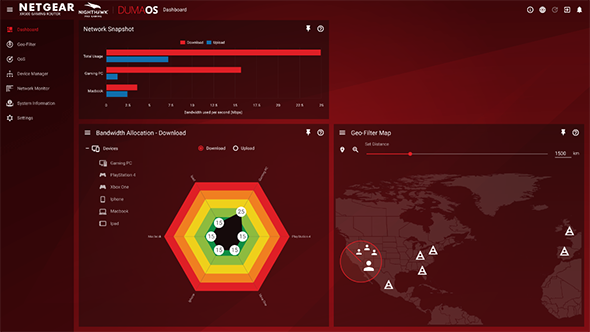 The software is incredibly concise, clear, and easy to understand. Most of the features are available as little widgets that sit on the softwares ‘dashboard’, controlled through a webpage on any connected device.

These widgets also play into one of DumaOS’s most useful features: the helpful popups available on every single feature. While I’m sure you are well-versed in the basics of networking and would never fall prey to internet issues, the prompts make life a lot easier when you inevitably do.

DumaOS makes prioritising gaming traffic a breeze, too. Duma already maintains a list of preordained games that are allowed to take the fast lane, including all console games and popular PC games, but you can add your own if need be. This goes hand-in-hand with bandwidth allocation tools through which giving preference to certain high-priority devices becomes a complete non-issue – all thanks to the visually clear and simple UI. 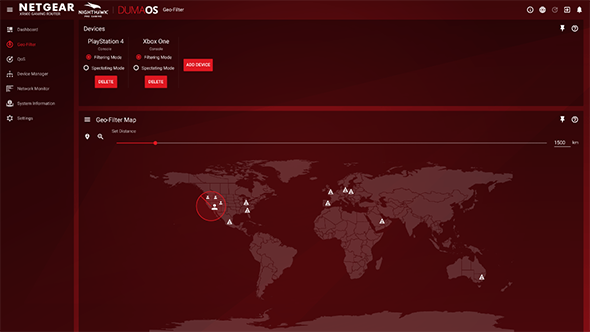 And if you don’t know the devices, or users, sapping the life from your network, you can open up the network monitor tab to find the main offender and get prioritising. Or you can just kick them off the network entirely.

One of the main features of DumaOS is Geofiltering. This allows you to limit or expand how far away games can search for multiplayer servers, and while filtering may prove useful for console gamers, we here at PCGamesN don’t give a damn about all that. This functionality is limited to just a handful of games and is already pretty widespread on the software side for PC, so will likely gather dust for most PC-exclusive gamers. 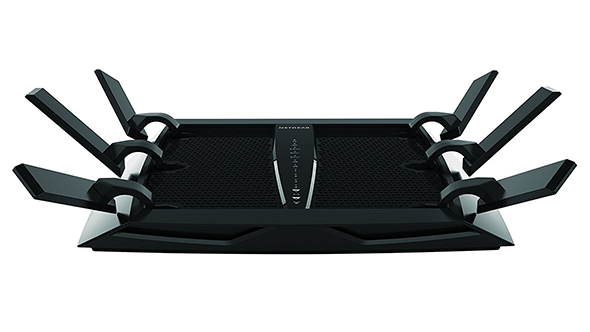 And that brings us onto who is actually going to buy a router with this kind of functionality. Despite the DumaOS’s friendly interface and useful functionality, the hardware is far from the best on the market at that price. I’m not sure its QoS features are convincing enough to lure network-savvy gamers away from hardware that’s simply better and cheaper, such as Netgear’s own Nighthawk X4S or Nighthawk X6S – which feature nearly identical hardware for a fraction of the cost, or greater tri-band connectivity and speeds at a similar price point.

Perhaps implementing the DumaOS was prohibitively expensive… but if you really must have complete control of QoS, network management, and most importantly, have to make every bit and byte count on a poor connection, the XR500 offers some unique and really easy-to-use functionality for $298 / £240. Otherwise, for fibre users that game exclusively on PC, and aren’t too finicky with the details, you can do better.