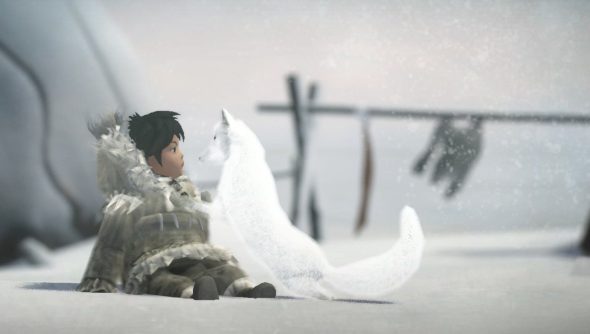 Next week, November 18th, sees the launch of Never Alone, Upper One Games’ Arctic puzzle platformer. It’s a pretty, dreamlike game following a wee Iñupiat girl, Nuna, and her fox chum as they attempt to power through the hostile tundra in an effort to find the source of a mystical blizzard.

The game’s been designed in collaboration with the Iñupiat, who are an Alaskan Native people. It’s based on an Iñupiat legend, and Alaskan Native storytellers and elders helped bring it to life. Take a gander at the launch trailer.

Both Nuna and her fox are playable, either in co-op or by switching between them in single-player, using their unique skills. Nuna can climb, move objects and throw her bola, while the fox is able to fit into small spaces and jump far.

The use of Iñupiat legend isn’t just for entertainment, there’s a hint of edutainment – gosh, I hate that portmanteau – to be found within Never Alone. Over 30 minutes of interviews with Alaskan Native storytellers can be unlocked, where they share stories about their culture and values.

Keep an eye out for it next week.