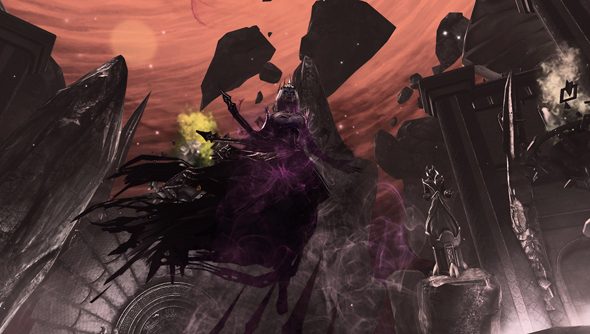 Neverwinter’s now on Steam! It’s free, as is Shadowmantle, its new expansion.

As the layer between the Earth’s crust and its outer core, the mantle casts no shadow. Therein lies the intangible sense of foreboding which must fuel every RPG expansion. Neverwinter’s first appears less than six months after its summer release, and asks players to delve further into the well-trampled Neverwinter Woods than they’ve become accustomed to over this series’ 10 year history.

I thought I’d covered Neverwinter Woods fairly thoroughly when Neverwinter Nights first came out in 2002 – and again, recently, in co-op with a sibling (that segment of the game comes at least one module before the campaign’s lacklustre streak sets in).

But it turns out we missed out the Dread Ring entirely – a “massive structure” built for ritual magic. In the time since, it’s become a safe place for the fell lich Valindra Shadowmantle to build an army and read some really serious spellbooks. Now it’s down to today’s players to sort her out. Honestly, I feel awful.

“Delivering new free content to our players is and always will be our highest priority,” said Cryptic Studios executive producer, COO and title-hog Craig Zinkievich. “To see Shadowmantle go live less than six months after official launch is incredible, and we couldn’t be more excited to release this new content to our players.”

Cryptic are particularly keen to garner feedback on their new class, the hunter ranger, who does this:

Elsewhere there are new high level specialisation paths to be pursued for the game’s existing classes. For the Devoted Cleric, the Anointed Champion; for the Trickster Rogue, the Whisperknife; the Control Wizard becomes Master of Flame; and the Great Weapon Fighter grows into the Iron Vanguard.

Their abilities will be bolstered by artifacts – an equipment type which offers stat bonuses, plus a power that can be used in combat. They’ll be found throughout the new story module.

It’s not clear whether the shadows that threaten the great Sword Coast city this time are the same that featured in Neverwinter Nights’ Shadows of Undrentide. But they’ll need illuminating all the same. How’ve you lot found Neverwinter to date?