Neverwinter’s previous chapter, Infernal Descent, plunged players into the fallout of the Vallenhas family’s desperation, the wake of a mysterious deal with the archdevil Zariel. The Vallenhas stronghold was dragged kicking and screaming into Avernus, the topmost layer of the nine hells, and players were charged with beating back hordes of encroaching devils and chasing down that damned contract. But, this was really just a tipping point. Now, in the online RPG game’s new module, Avernus, a reckoning is coming, and we venture deep into hell itself.

In my playthrough of Avernus, two things are quickly evident: the new Adventure Zone is challenging; and its Dungeons & Dragons: Descent into Avernus tabletop roots form the foundations, and are threaded through, everything you encounter – though with Neverwinter’s own signature spin. Like the previous module’s snippets indicated, Avernus is every bit as bleak and chaos-ridden as the D&D lore has it.

I begin at the familiar Vallenhas stronghold base to pick up the continuing Descent storyline, kicking off my first quest, A Friend in Need, by chatting with the adorable but somewhat amnestic Lulu the Hollyphant. There when Zariel fell from grace, the hovering pachyderm assures me if the archdevil can be restored to ‘normal’, Vallenhas and its plagued populace can be saved – especially if you can find her lost blade which “holds the last shred of goodness in her soul”. That’s the plan, then.

I’m immediately taken beyond the stronghold’s fringes, and deep into the wastes and planes of hell’s foyer itself – the “signature elements of Avernus”, which lead designer Randy Mosiondz tells me is something players were keen to see more of, and that Cryptic Studios worked hard to deliver this chapter. The new Adventure Zone is pretty vast, and my initial taste is via the First Layer of Baator – a rocky, devil-dominated region, air thick with a dusty, sulfuric smog, and peppered with only a few shelters and rust-riddled dune machines. Turns out I’ll need one of those to traverse Avernus’s wastes and hop between regions, but I can’t just pinch one.

Party up: The best MMOs on PC

Once I’ve pillaged enough scrap from the fallen machines nearby – and fended off some overly possessive devils in the process – the Kenku brothers, Chukka and Clonk, hook me up with my very own Infernal War Machine – which rather fittingly, Mosiondz reliably informs me, “runs on souls”. It’s one of the highlights of the new module.

As I enter the Avernus wastelands beyond, an area that essentially forms a kind of hub between the various new regions, I get to test the rust buggy’s mettle. It’s an expansive area dotted with obstacles to vault, roaming Manes to squish for XP, and dunes to carve up – all activities aided by the machine’s boost function. The vehicles “move pretty quick,” Mosiondz tells me. “You can do all kinds of jumps off hills and ramps and everything.” He cites this as one of his favourite things about the new chapter, and it’s far from difficult to see why. It’s sheer, unadulterated fun. Baked sand and the bones of Avernus’s many fallen crunch beneath the machine’s roaring wheels as I speed across the parched, arid planes, scoring some impressive air over the creaking wood ramps along the way. 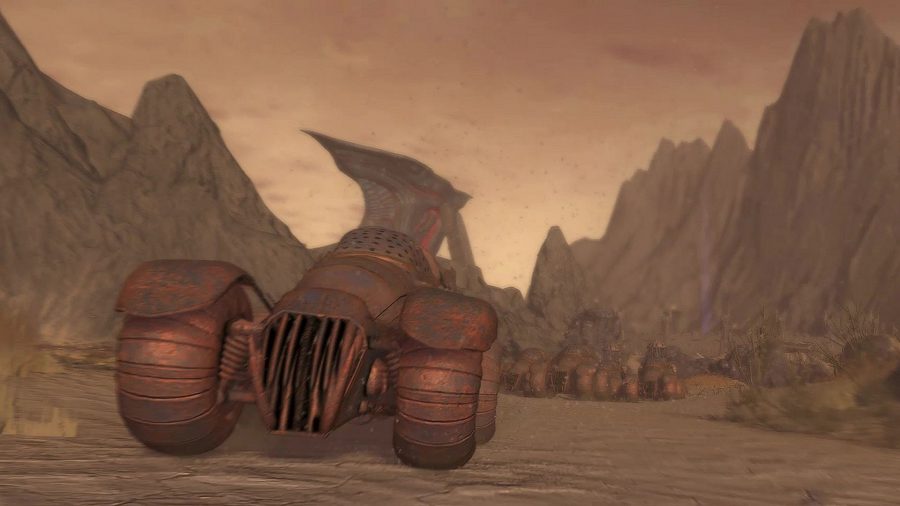 As told in the lore, the wastes area itself is “this almost Mad Max-y type setup”, art director Bill Yeatts says. “You can kind of bleed into this area or that area, but they’re all anchored in the wastes.” These other areas, which the many new quests in the Path of the Fallen Campaign, Heroic Encounters, and other activities take you to, include zones like the Wandering Emporium. This is a kind of nomadic enclave housed in and around an enormous desert tent, accessed via a fleet of humming war machines found in the wastelands. Here you can find shelter, vendors, and quest-giving NPCs.

"There are forests, there are volcanic regions, there are all kinds of areas to this place"

There’s a raft of different missions to complete across Avernus’s regions, ranging from the lighthearted (tearing through glowing rings in your new set of wheels) and resourceful (pinching enemy siege engine fuel canisters from the Stygian Dock), to the harrowing (freeing some “tortured souls” speared on shrivelled, flame-scarred trees and tormented by devils at Haruman’s Hill). These all feed from the D&D lore’s Avernus, which is “a giant plane of existence,” as Yeatts explains. “There are forests, there are volcanic regions, there are all kinds of areas to this place”. This range is mirrored faithfully in the new module.

In these places, you can also unlock Lulu’s memories, scattered around Avernus in the form of glowing white crystals, to help recover crucial information that can help you take down Zariel. You’re dropped into purple-hued slices of the archdevil’s past battles, which piece-by-piece build a picture of what came before, and offer invaluable clues to bring back to the determined Hollyphant. 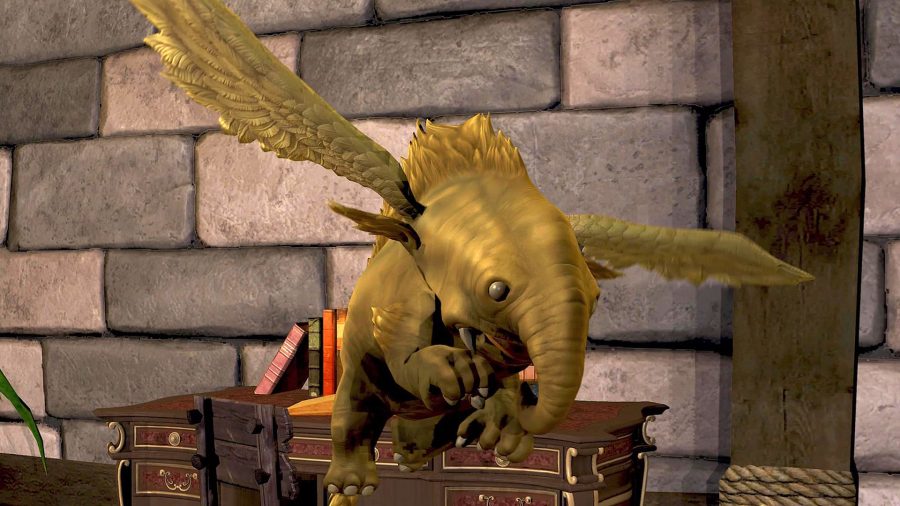 There are also areas like The Scab, a “giant festering wound rising up around an alabaster citadel” – the Bleeding Citadel, that is. A “massive angelic structure”, which is where you’re headed as the plot reaches a crescendo. This is an example of where Neverwinter’s own twist on the tabletop game has to come in, due to the constraints of crafting an MMO adaptation. “It’s on the centre of a plane,” Yeatts explains. “We can’t do that. We have to kind of put it in the corner somewhere.” Despite this, however, its looming presence is dominant and imposing on The Scar’s horizon; it’s clear this is the epicentre of the story.

Almost every inch of every region is flooded with devils you’ll have to battle to achieve your goals. Some are tricky to fend off, while others – like the armoured-horse-mounted Warborn Narzugon – require some herculean efforts to overcome. Take some level 80 friends, and fill your pockets with Scrolls of Mass Life. You won’t be sorry.

Take some level 80 friends, and fill your pockets with Scrolls of Mass Life. You won't be sorry.

Each mission and memory you complete advances you along the Path of the Fallen campaign towards its conclusion, Archdevil Zariel’s Challenge Trial. As I’m shown in footage of the module’s later stages, this harrowing, multi-staged assault takes place in the sumptuous Citadel, whose opulent halls throng with high level devils to best. Along the way you reach foes like Hezrou, a three-story tall demon with a jagged, hewing blade, chains encrincling his mighty arms, and skulls the size of, well, you, strapped to his raging legs.

If you’re a fan of the tabletop game, you’ll remember Baphomet, the palace-dwelling minotaur, who’s another very big baddie to fight on the way to Zariel. He’s got some dastardly tricks up his sleeve, like leaping into the air and slamming back down to put an end to your efforts. 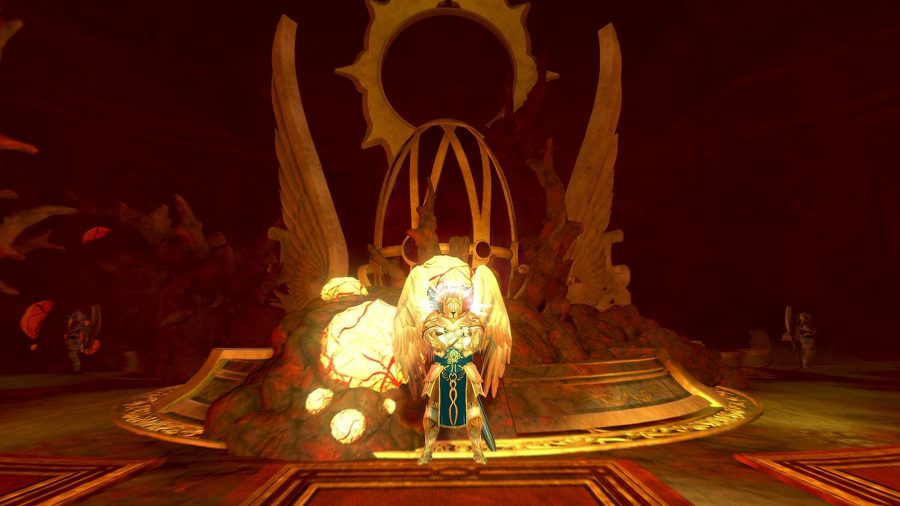 If you can get past these, at last Zariel awaits in the heart of the blighted Citadel, encircled by flames and flanked by some suped up cronies you’ll have to pick off, too. True to the lore, Zariel’s got some near-deific magical abilities, with the power to engulf you in flames, blast you with corrosive energy, and swipe you with her Mjölnir-like hammer Matalotok. It’s an epic showdown, and another of the module’s highlights for Mosiondz. “Zariel’s challenge is very neat, it’s very tough,” he tells me. “It [has] a beautiful setting, really challenging gameplay, really neat graphics to it […] it’ll be a lot of fun.” Beyond this, I won’t give anything away; the battle and its consequences need to be experienced full-on and firsthand.

Zariel awaits in the heart of the blighted Citadel, encircled by flames and flanked by some suped up cronies

In addition to the locations, main story beats, and ferocious foes, Neverwinter: Avernus ushers in major new Heroic Encounters. Ensnared, for example, sees you join a group of celestials to mount an attack on the Bleeding Citadel in order to free one of Bel’s most powerful generals. There are also minor ones, which charge you with clearing areas of devils, destroying an enemy War Machine, and freeing some poor souls trapped inside coins. There are additionally plenty of goodies to scoop up, like the Expedition Pack of Good Intentions, Lulu’s Bag of Goodies, and other options brimming with upgrades for Infernal gear, new companions, and more.

Neverwinter: Avernus takes you into the bowels of the first level of hell as of today on PC. From what I play, the epic conclusion to the Descent into Avernus plot has plenty to offer for stalwarts, newbies, and D&D fans alike, wrapped up in a rich, story-driven package. As Yeatts puts it, “It basically speaks to the strength of the [D&D] IP – you can take a portion of it, and it’s like, ‘Hey, this is a whole thing!’ It’s an amazing world and it keeps getting richer and richer.” Just remember those life saving scrolls – Zariel’s a tough old beastie.