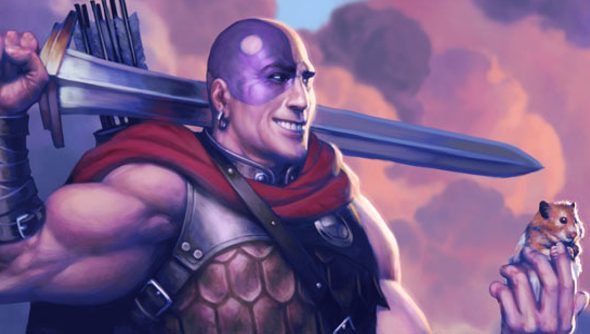 Neverwinter is a funny thing. A D&D themed action MMO, it’s an odd blend of classic tabletop adventures, complete with Dungeon Master text, and hacking and slashing. It sort of works, though. Indeed, it’s one of the more enjoyable MMOs when it comes to simply hitting things. I was thinking of a trip back in, but now I might hold off until the next expansion, Elemental Evil, drops next month.

The free-to-play MMO will be expanded with new areas, a storyline involving cultists getting up to no good throughout the Sword Coast, the paladin class and – most importantly – a cameo from a rather well known hamster and ranger duo.

Minsc, the unstable berserker and ranger, and his constant companion, Boo, the eye-scratching cosmic space hamster, will be making an appearance in Elemental Evil. The pair have spent the last century lazing around doing very little, as petrified statues are wont to do. But they are free now, and without missing a beat find themselves embroiled in a quest to stop the cultists from being all sinister.

According to Cryptic, players will be able to adventure alongside the eccentric duo, getting into scraps while the berserker roars and natters to his pet and best bud.