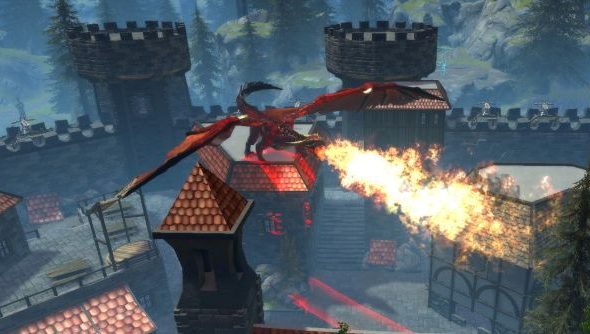 Of the many (many, many, many) free to play MMOs floating around the digisphere, Neverwinter is one I like to keep an eye on. I played it for a dozen or so hours a couple of years back and found it to be really fun, though my computer at the time was even more of a hunk of wreckage than currently, hence why I stopped. It had some really unique D&D like elements with custom-made dungeons, cool classes and was clearly an interaction and engine upgrade over my mainstay World of Warcraft, even if it wasn’t quite as solid at varying quest design.

The latest expansion is close now, releasing on August 11th. It’s called Strongholds and is built around the eponymous structures serving as guild halls. Noobies and the old guard alike can help construct the stronghold and, once it’s fit for purpose, battle over a three lane MOBA-ish map with their garrisons at either end. Here’s the trailer:

How accurate the MOBA-like claim is remains to be seen, as anything with some lanes and NPCs now fits that broad bill. More interesting to me is the co-operative building element. The major complaint about WoW’s Garrisons were how lonely they felt and the fact they took players away from each other and into their own instances. Having them shared among guilds has obvious downsides for players uninterested in that, but massive boons in what bonuses can be granted, how long the content can last (as it requires teamwork) and social elements.

In celebration of the update, there’s a double resources week running through to release. Meanwhile, loads more details on Strongholds on the official site.