What we’ve seen so far of Blood and Wine’s new region of Toussaint makes it look like a lovely, vibrant place, but there have already been hints of its dark underbelly. This latest screenshot, taken from The Witcher 3’s forums, shows it’s grim business as usual for poor old Geralt. In what looks like a ritual sacrifice of some sort, a body lays dismembered on a table, its hand lopped off and placed on a bit of parchment and its body cleaved in two. Now I’m no witcher, but it doesn’t look like the work of a monster to me. See for yourself below:

Original Story 22 April, 2016: A batch of new screens have landed for The Witcher 3’s anticipated final expansion, Blood and Wine. CD Projekt say they’ll be releasing more information on the DLC in May, so expect a release date announcement next month, but in the meantime you’ll have to settle with this latest collection of lovely screens.

The Witcher 3 is among my favourite games ever and thouroughly deserves its place in our list of PC’s best RPGs.

I certainly can’t wait to dive back into The Witcher 3 for 20 more hours in Blood and Wine’s new area, Toussaint. It might still have the sunflowers, but it looks much more vibrant and less depressing than Velen and the surrounding areas, though no doubt it’ll be just as ugly underneath. 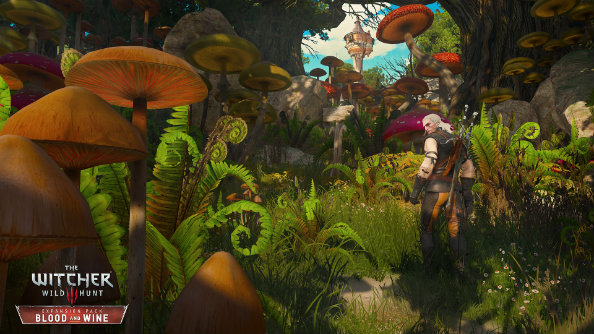 Mushrooms, mate. You don’t see stuff like that in the main landmass of The Witcher 3. It looks almost like something out of a twisted fairytale, but probably don’t play it in front of kids, as Geralt will probably be shagging on top of one of those as soon as he gets the chance. Sound too strange? You obviously haven’t read about the seven weirdest sex scenes in The Witcher 3. 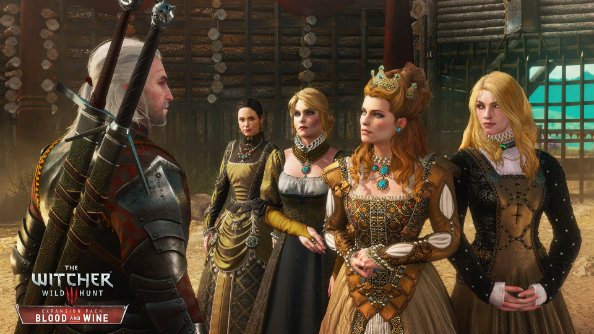 That well-dressed woman in the middle is almost certainly royalty – a queen perhaps, flanked by her handmaidens. Remember that Disney-like palace in the first released screens of Toussaint? She probably lives there. It looks like our beardy monster hunter is having a chat with her in some sort of fighting arena. But why is Geralt there: for coin, or perhaps to gain that audience with a royal? 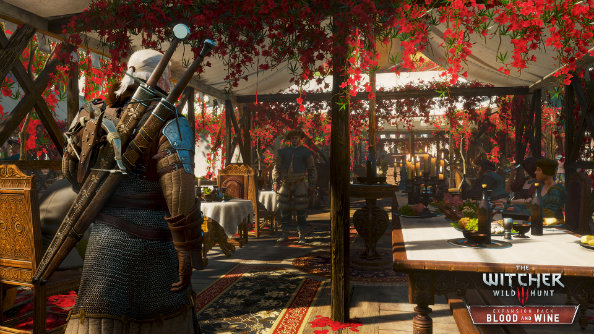 Just look at all the detail packed into this tiny scene: the chain-links on Geralt’s armour; the sheen on his pouldron; the ornate chair back; the foliage; and the decorative floor mural. It looks like more wedding celebrations to me. We’ve seen two peasants be wedded in Hearts of Stone, but my guess is we’re about to see how the other half get their other halves. 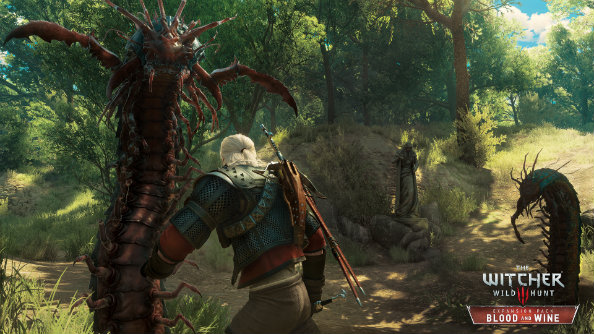 “I can already tell you Blood and Wine is a fascinating story, with every sort of twist and turn you’d expect from our writers,” said Marcin Momot, senior community coordinator, CD Projekt.

“Toussaint, the new realm we’re creating for the expansion, is unlike anything you’ve seen in Wild Hunt – carefree and colorful, but your gut never stops telling you that there’s some real dark stuff happening underneath all that.” Like giant centipedes.