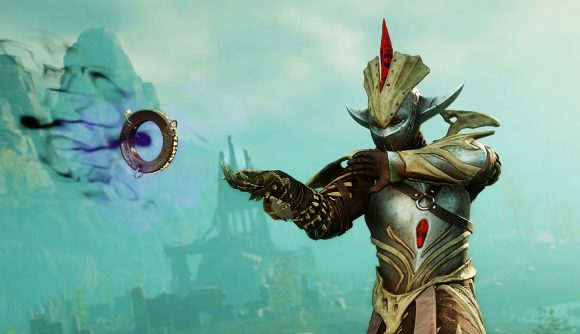 New World is getting a new weapon, enemy type, and oh so many tweaks in a patch later today. One of the MMORPG’s moderators confirms on Reddit that downtime for New World’s 1.1 update starts at 5am PT / 8am ET / 1pm GMT today (November 18) and is expected to last four hours.

Amazon Games started testing features for the update last week on the brand-new PTR. One of the main standouts is a new weapon called the Void Gauntlet, which allows you to support your allies or attack foes – think of it as a DPS-support hybrid. “It’s the first weapon to scale on both intelligence and focus, making it a great pairing with the Life Staff and other magic weapons,” Amazon says. “The Annihilation tree focuses on maximising damage at close range and revolves around Void Blade, a summoned blade of corrosive void energy. The Decay tree offers ranged healing and debuffs and revolves around Orb of Decay, a dual-phase projectile that can debuff enemies and heal allies.” If you’re keen to find out more, check out our New World Void Gauntlet guide for details on the skill tree and best build.

You’ll also find a new batch of foes raiding southeastern Aeternum. A Gaul leads the Varangians with a reputation for “brutality and a twisted sense of humour”. They’re here to seek magical artefacts and arcane lore – no, not the League of Legends Netflix show – left behind by the Crimson Sorcerer to aid Lord Commander Attalus in his conquests.

You’ll stumble across several types of Varangian foe: scouts, knights, and archers. Head to Western Everfall to chat with Abigail Rose if you want to take on a few new missions to learn more about the new rabble of trouble makers.

Amazon Games has also made considerable changes to the world experience, combat, and economy. You can find the complete set of patch notes here.

The new update follows a recent wave of bans against those caught item duping in New World. This month, the developers have banned over 1,200 players for trade- and housing-related exploits after a new furniture duping exploit led to New World’s economy being switched off again.