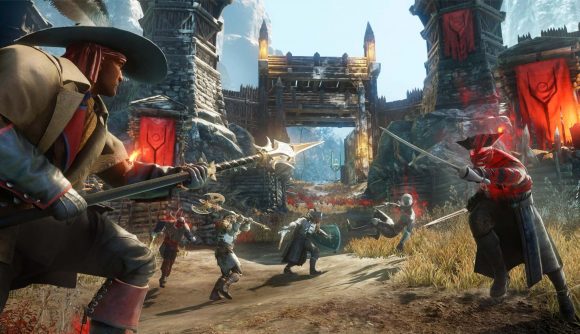 July 22, 2021 Amazon Games has responded to the situation.

New World‘s recently released closed beta already passed a 200,000 concurrent player count, but it looks like some of those using Nvidia’s best graphics card to get an early peek at the game aren’t having a very pleasant experience. Reports are appearing that several RTX 3090 GPUs are seemingly bricking after running the new game.

A Redditor claims that their 3090 stopped working after simply switching the graphics quality in the menu and hitting save. The same thing happened with content creator Gladd, who also reported the same problem on an EVGA 3090 card, stating that the beta “fried my graphics card completely”.

Many comments suggest the issue primarily affects EVGA’s FTW3 variant of the graphics card, but Gigabyte is another brand that’s caught in the controversy. The oddest thing about the issue is that it seems to be exclusive to the RTX 3090, suggesting that there could be some underlying problems with the GPU that New World has uncovered.

“New World makes standard DirectX calls as provided by the Windows API. We have seen no indication of widespread issues with 3090s, either in the beta or during our many months of alpha testing.

“The New World Closed Beta is safe to play. In order to further reassure players, we will implement a patch today that caps frames per second on our menu screen. We’re grateful for the support New World is receiving from players around the world, and will keep listening to their feedback throughout Beta and beyond.”