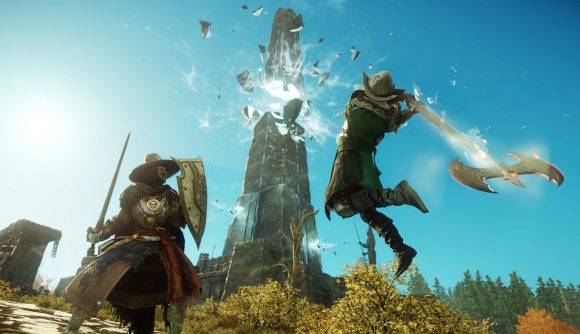 New World reached a peak concurrent player count of 200,856 over the weekend, and, as SteamDB shows, that number has been on the rise since the beta started. Over on Twitch, it hit an early high before the weekend of 721k viewers, buoyed by some big-name streamers and Twitch Drops for some free in-game items. Even with those incentives in mind, the stat’s still impressive – well ahead of Just Chatting, with 369k viewers, and Warzone, with 246k. The upcoming MMORPG also holds the top two spots in Steam’s weekly top seller list.

For comparison, Amazon’s Crucible reached a peak of 25,145 on release day, which dipped precipitously in the weeks following launch. The game was shelved not long after.

Clearly, between FFXIV and New World, it’s a good time to be into MMORPGs right now, with the popular Final Fantasy game selling out digitally in the US at one point.

The proper New World release date is set for August 31. You can follow that link for a whole lot more info on what to expect from the game.