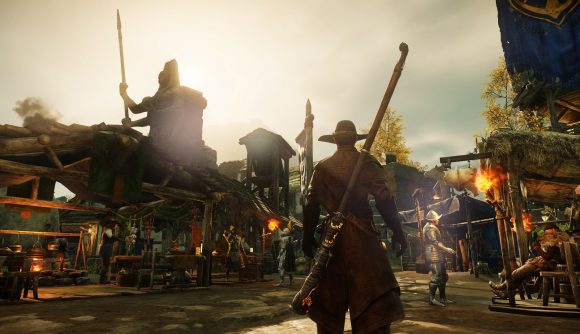 New World has been wildly popular since launch – the MMORPG is still the third-biggest game on Steam – and with that popularity has come a tidal wave of players looking to find the exploits in the game’s systems. Those exploits have apparently not been difficult to find. After another duplication exploit started circulating over the weekend, the devs at Amazon have once again disabled the in-game economy.

“We are aware of a possible duplication exploit that has been circulating the forums and social media,” the devs say on the official forums. “We are disabling all forms of wealth transfer between players (ie. sending currency, guild treasury, trading post, player to player trading) while we investigate. Any player that has engaged in the use of this exploit will be actioned against.”

The exploit appears to allow players to duplicate furniture items, and the in-game market has been flooded with trophies since the issue began to make the rounds. As PC Gamer notes, there have been numerous posts about the issue on the official bug report forums, and the devs are still investigating.

This isn’t the first time the New World devs have had to turn off wealth transfer, as the same thing happened a few weeks ago in response to a gold duplication exploit. The economy remained disabled for around two days as the devs investigated, and regular updates on the progress of that investigation were provided on the official forums.

Players have been concerned that Amazon isn’t doing enough to punish those exploiting these sorts of issues. The game’s subreddit is currently filled with calls for the devs to permanently ban exploiters, as the 24-hour bans that have previously been issued clearly haven’t been enough to discourage players from duping.