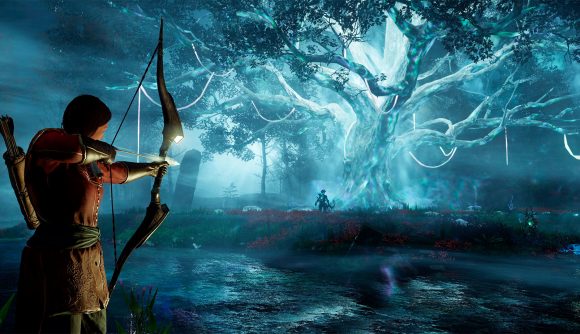 It seems like everyone is either currently playing New World or are stuck in long server queues to play Amazon Games’ new MMO, with it now being the fifth-biggest Steam game of all time by concurrent player count. However, troubling new reports are emerging on the game’s subreddit of it bricking players’ GPUs despite the developer previously insisting that it is “safe to play” following similar reports that surfaced during the game’s beta.

Previously, these issues seemed predominantly limited to Nvidia’s best graphics card, the RTX 3090, with a large portion of the blame directed towards soldering issues on EVGA branded cards. However, there are now multiple accounts of the game killing not only RTX 3090s, but also RTX 3080 Tis, RTX 3080s, RTX 3060 Tis, and even RTX 3000 laptop GPUs. Both EVGA and Gigabyte components have, again, been highlighted as particularly vulnerable to being fried.

Amazon Games previously took steps to try and mitigate the issue during the beta through an fps limiter in the game’s menu. These new reports, however, suggest the problem is far from resolved, and we’ve reached out to Amazon Games for further comment.

While the majority of reports we’ve found mainly concern Nvidia GPUs, some players using AMD GPUs have also encountered overheating and crashing issues. Users on the subreddit have suggested players implement their own fps limiter via tools such as Rivatuner Statistics Server, particularly given the prolonged high GPU usage that can occur while waiting in a server queue.

Should you be unfortunate enough to have your graphics card die while this issue remains unresolved, we recommend contacting your card’s manufacturer for a potential replacement.

However, if you’re lucky enough to be out of the server queue with GPU intact, you’ll find all tips and guidance you’ll need on New World’s fishing mechanics, the best places to find New World briar branches, and advice on which New World faction you should pick, should you wish to join your friends or pummel them into the ground, in our guides.

“We have received a small number of reports of players encountering issues with GeForce RTX cards. After a lengthy investigation, we have verified that there is no unusual behavior from New World that causes these issues.

EVGA has previously acknowledged manufacturing issues on some GeForce RTX cards. New World is safe to play, and we encourage players who have encountered a hardware issue to contact the manufacturer.”