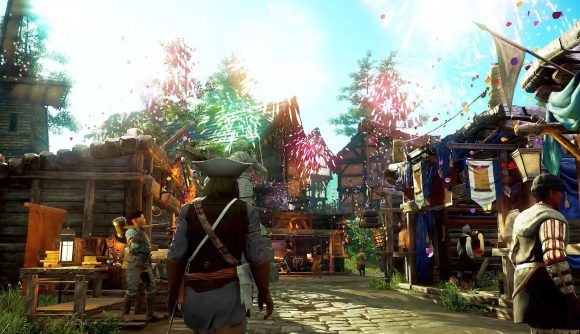 Well, it’s finally here. The New World release date has arrived, and servers around the world are opening up. As the New World release time details shared by Amazon Games revealed earlier this week, servers across all regions are now open for Aeternum’s budding adventurers. Following a roaring start across European servers earlier today, the MMO is now seeing peak player counts of more than 650,000.

That’s according to SteamDB’s data for the brand-new MMORPG, which indicates that, in the past few minutes, New World saw a peak player count of an eye-watering 650,150 adventurers on Valve’s platform. And that’s been climbing all day, so it could well be even higher than that when you read this.

With Steam being the place to dive into New World – it only being available on PC (you can buy New World via Amazon, but that’s for a Steam code) – this data gives us a really good picture of just how many people are jumping in overall. Phwoar.

In case you’d like a handy refresher, the New World release times across the world are as follows (via Amazon’s handy graphic on Twitter):

See how you can prepare for launch and get exclusive drops from some of your favorite content creators!