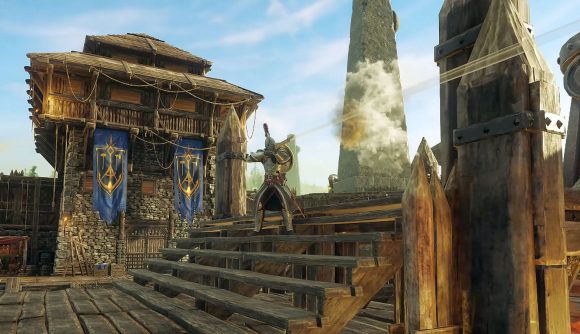 We might have to wait a little longer for Amazon Game Studios’ upcoming MMORPG New World following its recent delay – but there are some lovely new morsels of information to gobble up while we wait. The studio’s just released a New World dev diary exploring the online RPG game’s PvP Territory Wars and PvE Corrupted Invasions – and there are “one-hour, intense PvP battles”, a “mighty horn” that can buff allies, and a “new level of social dynamism that no other game has” on the way.

That’s according to the New World ‘War and Invasion’ dev diary video, which you can check out in full below. Along with some mid-siege gameplay footage, Amazon introduces the concept of territories in the game’s setting, Aeternum.

“Some of those territories can be controlled by companies of players,” lead systems designer John Liberto says. When two of these clash, a war can then break out, with one challenging the other to a war at their fort base – and, with enough standing, try to execute a “hostile takeover” of it, as senior producer Michael Willette explains.

Every territory-controlling company then sets something called a “siege window”, which sparks off a “one-hour, intense PvP battle”, software dev engineer Scott Geiser says. A 50v50 PvP battle then erupts between the two companies, each trying to take the territory, which is scored by capturing the fort’s flag for a certain period of time. “It’s really the pinnacle moment of PvP in the game,” player experience lead David Verfaillie adds.

You can see this in action in the first half of the clip below. A timer ticks down in the top of the HUD, with the different stages of battle you’d expect set as objectives, such as breaching the enemy’s gates and defending certain points, all while making the most of the various siege weapons the game offers. 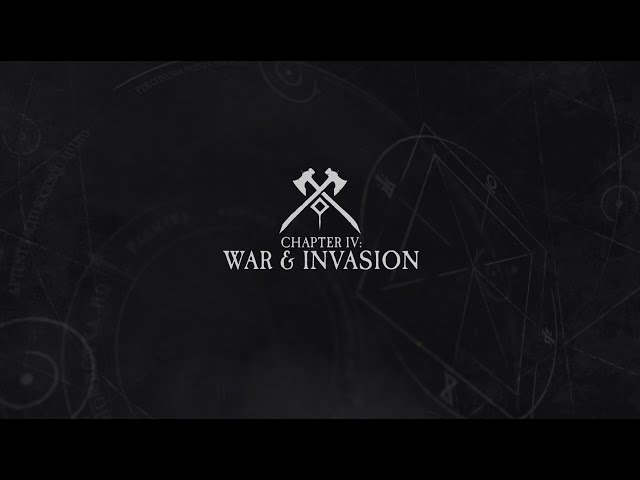 You can see some of the game’s weapon options demonstrated in the clip, with cannon, fire launcher, and repeater platforms on offer, for attackers – and for defending companies, there are ballistas, explosive cannons, repeater turrets, ‘fire droppers’, and even a ‘Horn of Resilience’ – this gives nearby allies a temporary healing buff.

“It becomes this big, epic battle where there’s 50 players charging at the gates”, art director Charles Bradbury says of the PvP combat – and one winner emerges when it’s all over. “It’s a new level of social dynamism that no other game has,” Liberto concludes. 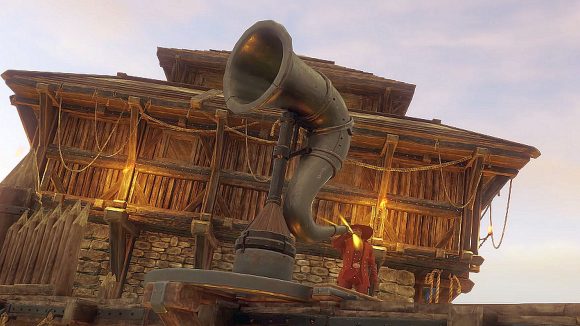 To find out more, and also hear about the game’s PvE invasions, check out the clip above, as well as a new ‘War’ blog post on the MMO game’s site here. There are some images of the mighty weapons you’ll get to play with to get a look at ahead of New World’s launch on August 25.