Reekwater is the perfect name for New World’s newly unveiled region. Swampy and supernatural, it’s one part Red Dead Redemption 2’s Bayou Nwa and another part Fable III’s Mourningwood – a maze of misty marshland hiding secrets and settlements hoisted onto wooden stilts so the crocs can’t snap at folk. Adding a new flavour to Amazon’s colonial-themed MMO, Reekwater’s not for the faint of heart; it’s an endgame zone with tough quests, confrontations, and collectables aplenty. That’s all well and good, but its chief attraction for those less hell-bent on becoming an alligator’s afternoon snack is one of its key features: fishing.

Reekwater’s first settlement was built on the submerged ruins of an ancient district. Someone called the Siren Queen and her flotilla had once taken the area, dragooning those unable to hide or run into her service, expanding her power in the region.

Uncovering this history is not only part of this region’s main quests; there are signs of it everywhere as I plod through the swamp towards the nearby settlement, Shallow Waters, to check in at the inn and set a respawn point. Relics from another age are scattered among the trees, such as ships half-devoured by the swamp. I also hear about Dryads – otherworldly soldiers of wood, fungi, and glowing gems.

My visit to Reekwater is brief, so there’s not much time for hunting treasure or slaying monsters in the bog. Instead, I head straight out, fishing rod in hand, to do a spot of salmon snaring. I waltz past the village’s quest-givers, desperate for my help investigating nearby pirate activity, tracking down ancient tablets, and other tantalising adventures. Not today! I want to be the very best in my session, catching ’em all as if it were a pike-centred spin on Pokémon. 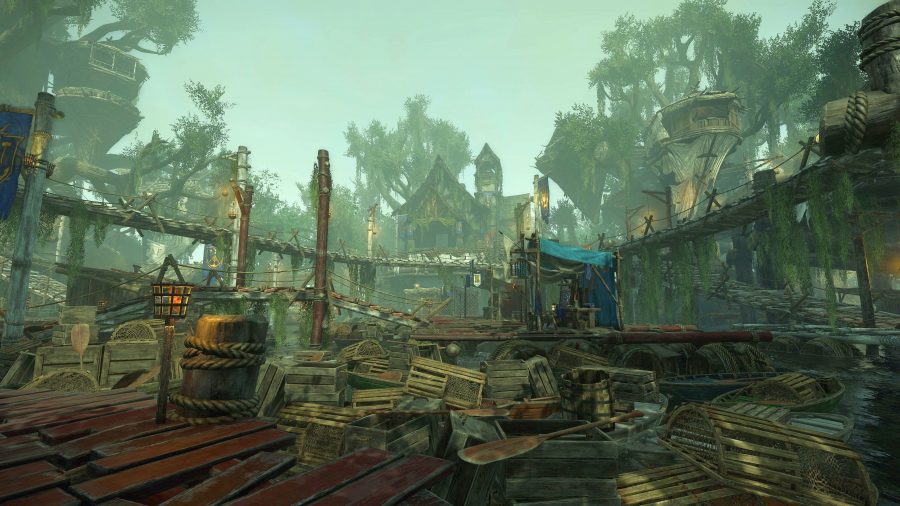 I make my way to Siren’s Stand, a waterlogged zone criss-crossed by patchy log pathways in the air above. I settle by a shallow pool the second I see the ‘collect fresh water’ prompt pop up – like Reekwater’s setting, New World’s fishing is reminiscent of Red Dead Redemption 2’s. I stuff bait onto my hook then click and hold to cast my line, which sends an icon flying up a distance measurement bar, tapping again at the correct time to lock in the reach I’m after. A UI marker tells me how deep I’ve landed my shot.

It takes a couple of tries, as my determination to have a fish supper overrules my patience

As you’d expect, fishing in New World is a waiting game. I get a chance to appreciate nature around me, as strange critters squawk and hum. Once I’ve got a bite, on-screen prompts guide me through the rest: a handy warning flashes ‘Get ready!’ and then ‘Hook!’ as a timer rapidly rolls down through traffic light colours. The more quickly I respond, the easier reeling in will be, and the bigger the XP reward I’ll get when I finally catch the bugger.

New World’s fishing minigame is surprisingly tense. Keeping an eye on the water’s ripples, I have to work out when my catch is and isn’t thrashing, only holding down my mouse button when it’s calm. A marker shows me when the line’s slack, and thus needs reeling, or taut and at risk of snapping. It takes a couple of tries, as my determination to have a fish supper overrules my patience. Once I get my wilfulness in check, it’s a pretty easy little diversion. Not very rewarding in this spot though; I land only a 5.5lb sturgeon. I try again to little avail, landing an even more miserable 2.6lb salmon. 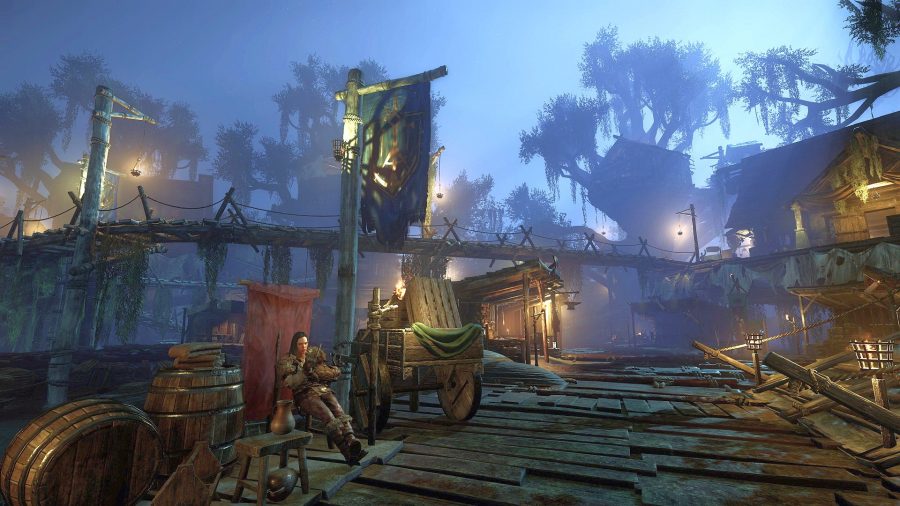 As the sun rises, I spot a glimmer of hope: a deck protruding from a bank on the other side of the swamp. Sparing no time, I make my way there to find I’ve hit upon a secret, three-star fishing hole. Huzzah! They’re called ‘hot spots’ in the game, and are marked by swirling pools, bubbling with fishy goodness. The fish are better, rarer, and far more likely to bite here.

Giddy at the prospect of a prize catch, I get stuck into the minigame, being sure to release my line as it hits the centre of the pool, plopping satisfyingly into the middle of the hot spot. It’s a resounding success; I land catch after catch, each heftier than the last.

Roleplay away: The best MMORPG games on PC

As time in the preview ends I’m both satisfied at having scooped some winning specimens and a little concerned at the competitiveness this little activity has wrought in me. Sure enough, I hear: “So, who caught the biggest fish?” from one of the devs as I filter into the chat. Various numbers are called out. It doesn’t seem polite to mention I landed a massive 47-inch, 21-pounder of a pike. But that doesn’t stop me.

It’s a fun way to spend time, and a welcome change of pace compared to New World’s combat-oriented questing and giant PvP War mode. But it’s more than just a diversion: there are particularly rare critters to be found in Aeternum’s waters which “are going to be highly coveted inputs” in New World’s crafting system, as head of player experience David Verfaillie tells me. “Likewise, you’re going to be able to break down fish into various parts, and some of the more rare and lucky breakdowns that you get will also play into high-level crafting”. 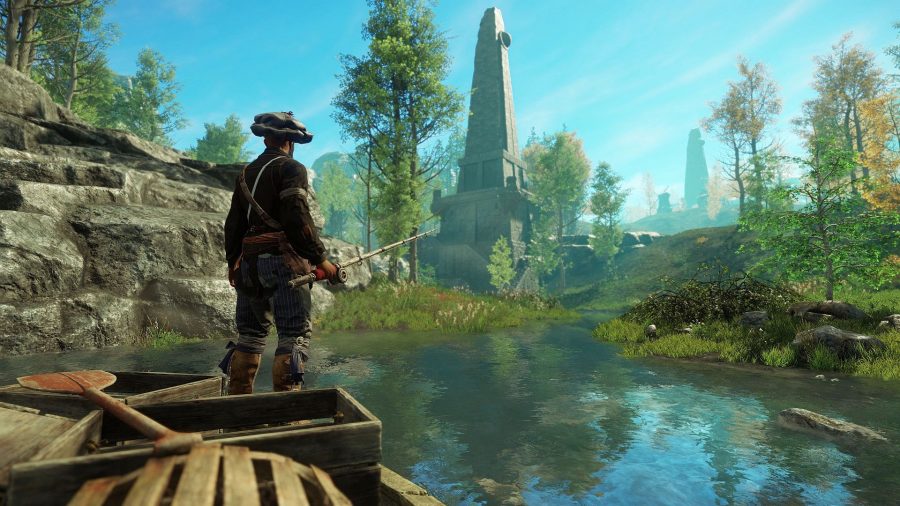 “Those rare ingredients are going to come from rare fish – resources I think people are going to chase when you want rare gear,” game director Scot Lane adds. That’s a potential game-changer as the kind of gear you can craft in New World – and how it behaves – depends on various factors, such as the resources you use to craft it and a “mysterious substance” called Azoth that you harvest in the world (and there’s some luck, too). Sure, the combo of rare fish and snazzy swords is a bit of a head-scratcher, but hey, if a prize-worthy pike can help me craft a battle-winning, er, pike, I’m willing to give it a go.

if a prize-worthy pike can help me craft a battle-winning, er, pike, I’m willing to give it a go

As for how and why fishing is going to be a key aspect of the game, Verfaillie tells me: “The inspiration started by looking at our game and how we’ve been trying to infuse skills, gameplay mechanics, and everything. For example, our combat is skill-based; it’s very action-oriented, you have to aim, you have to choose distance. We wanted that style of gameplay to go throughout the whole game.

“When we started doing fishing, we looked at it and said we want this to be an active thing. We don’t want you to just push a button and then it does it all for you. So, we came up with the idea of aiming for the hot spots, [where] distance matters, the reeling matters. We took a look, obviously, at a lot of games that had fishing, and we borrowed some elements, but also tried to come up with some of our own. 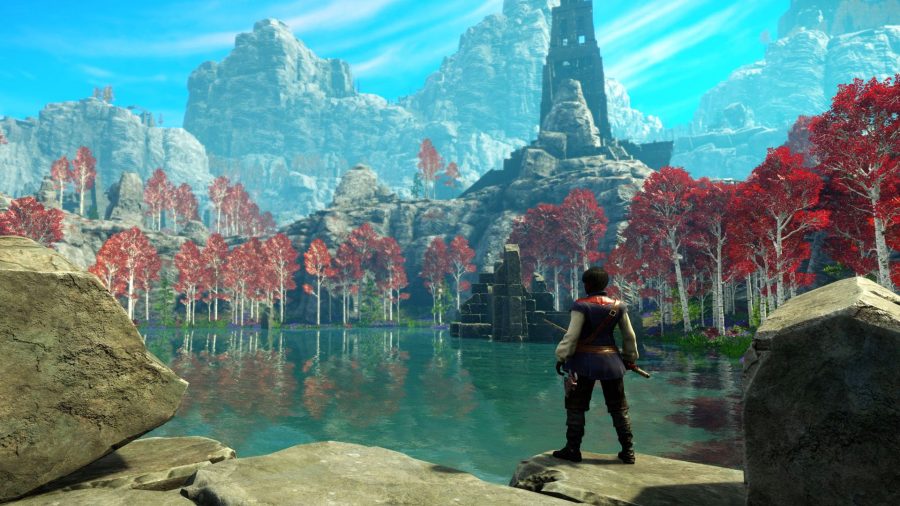 “I think we got a nice mix that fits within the world and gives you an opportunity to demonstrate some skill, while also offering a chance to relax,” Verfaillie tells me.

“We have this big, beautiful island, Aeternum, and it’s very dangerous and scary, but we’ve always wanted it to be an island where players can have things to do and can get lost,” Lane adds. “Fishing just felt natural. If you were on a desert island, what you’re going to do is fish to eat, so I think it was a natural fit.”

There’s no word on a specific release date for New World just yet, but we should be able to hop in for a spot more fishing in spring 2021. In the meantime, check out our guides to the best pirate games and free MMOs you can dive into right now.