Warriors abound, ready for action. A War demo in Amazon Games’ upcoming MMORPG New World is nigh, and troops gather in a nearby town’s cobbled streets, scrawling their names on a War Board to volunteer, ready for transportation to the battleground. As the conflict approaches, the first thing I’m struck by is the look of the attackers and defenders decked out in the MMORPG’s distinctive, characterful gear.

Among the sea of tricorns and fantasy-colonial era garb there are warmongers sporting stag horn-topped sage helmets, viking battle shields strapped to their backs. They’d look as easily at home aboard one of Assassin’s Creed: Valhalla’s longboats raging to war by sea, as they do on foot in the fantasy-colonial hybrid land, Aeternum. Mix-and-match gear is nothing new for MMOs, but there’s something appealing and Fable-like about the combinations possible in New World. Pairing knightly plate armour with Mjölnir-esque hammers, jaunty feathered caps, glittering mage staffs, and dashing colonial era fabric coats makes for a snazzy troop – and imbues New World with a distinct flavour. It stands out visually in a saturated genre.

Plus, there’s a lovely dash of comedy that comes courtesy of the game’s emotes. I spot a gaggle of warriors that don’t seem too perturbed about the impending violence; they’re gathered about a settlement entrance, tap dancing.

Many of the troops spend the run-up to war in a more focused fashion, making good use of the game’s classless progression system to spend attribute points across New World’s weapon mastery skill trees. There’s still time to carve out a last-minute PvP edge before the horns sound and the battle drums boom. Beyond what’s in the demo, and today’s preview event, the studio also says it’ll bring more weapon skill trees and additional weapons to the game as New World gets closer to launch. 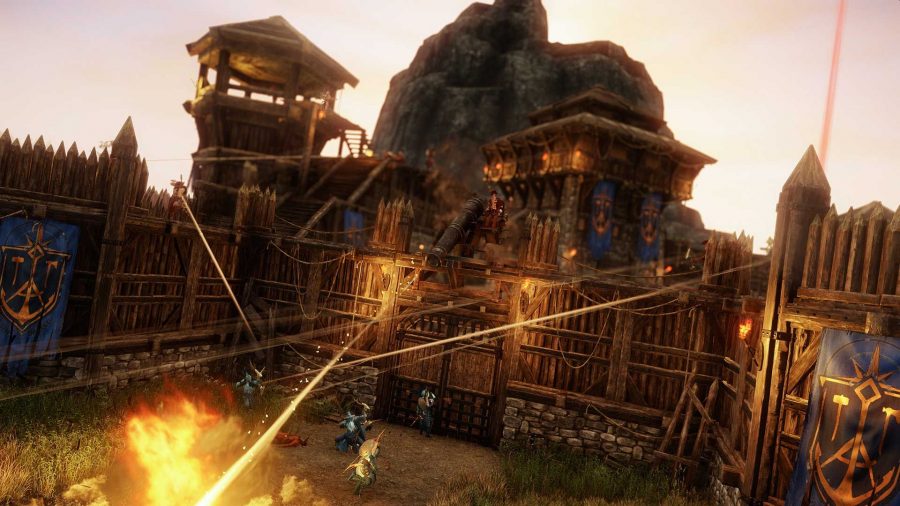 With eager troops enlisted, and the 50v50 ranks filled, the units are automatically teleported to the site of the war. Pre-war, the impending fight is signalled on the game’s map, and the sieging side – which I get to witness – gathers in a garrison outside the fort’s walls. The phase kicks off a countdown timer, during which time you can kit yourself out, spend attribute points – or, you know, talk shop with the 49 others on your side. Remembering to pack some hotkey-equipped snacks is vital, too, the New World devs inform the troops. Taking, or defending, a fort is hungry work, after all.

Remembering to pack some hotkey-equipped snacks is vital. Taking, or defending, a fort is hungry work

Troops mull over their weapon choices as the timer ticks down. The breadth of different equipment and associated effects means there are both real advantages and possible pitfalls when it comes to picking out PvP-perfect kit. As becomes clear later on, war in New World isn’t a simple case of ranged or close-quarters scuffling, attack or defend. Troops on both sides need gear that packs a punch ready for whatever’s thrown at them. With enough investment, for example, a light staff-shield combo is a handy choice. The staff has a neat traverse effect which lets you move across the battlefield very quickly, and can pop up a projectile-blocking bubble – helpful when trying to take a control point – while a shield charge, or shield bash, will teach pesky foes to get out of your way, pronto.

At last, the timer’s up, and all-out war kicks off in earnest. 50 sieging troops flood towards the defending fort as fire launchers rain down red-hot damage on their tricorn-topped heads. Flintlock bullets sing and fizzle through the fray, mixing with the hiss of fiery torpedoes that whistle like fireworks but pack the punch of cannonballs. There’s a tense, relentless half-hour to capture – or prevent the capture – of the stronghold. 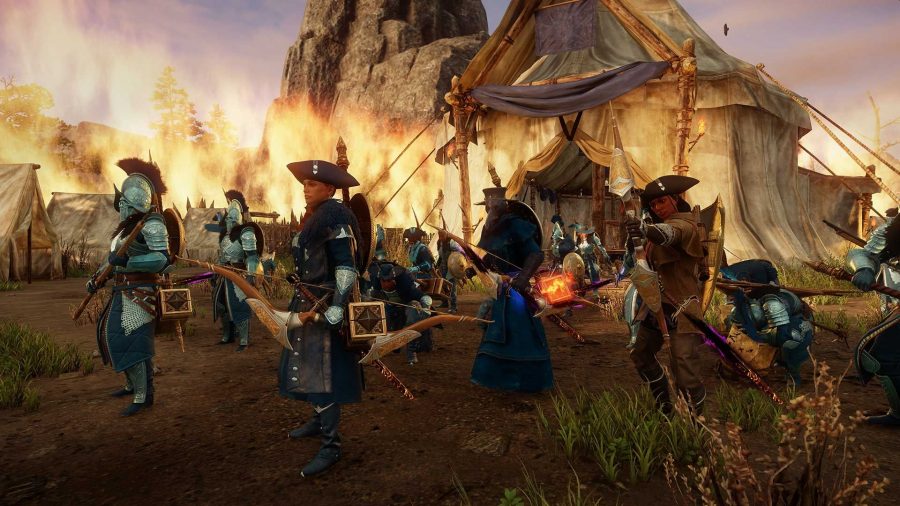 The first step, before the siegers can even think about barging through those gates like a bothersome relative, is capturing three control points outside the fort’s walls. Aside from advancing the battle, these act as respawn and armoury access points once taken. It asks for a mixture of skills, and there are elements of attack and defense needed, even within the sieging side. Casting a protective bubble (hello, light staff) is enormously helpful in staying alive while scooping up control points, as you’re showered in ballista fire from the defenders’ fort walls, and there’s plenty of face-to-face melee combat, too. Sword, staff, and shield-wielding defenders stick their necks out to keep the points safe – though, it’s of no use. The attackers push on.

Flintlock bullets sing and fizzle through the fray, mixing with the hiss of fiery torpedoes that whistle like fireworks but pack the punch of cannonballs

The fort has five gates, three in front, two at its rear. This is where sieging gets really strategic: will you deploy a small group of commandos to try and flank the fort’s rear, or concentrate all 50 into a single uncompromising wave on its facade? The five gates pop up on the UI as little markers with red rings, denoting each gate’s health, while also providing a handy live feed on how the battle’s going. It’s easy to see how this can be helpful if there’s a clear path forward – but, equally, this could melt team-wide strategy in the moment. Sides will need to keep communicating to stay focused and concentrate effort where it’s needed.

Powder kegs are a gate’s worst nightmare but it’s a task getting them from armoury to kaboom! They not only take time to set up, but you’ll have to trundle back to the armoury to grab them if you’re out, all the while keeping the barrels – and yourself – safe as you get everything into place. The good news, though, is that in all that chaos your pals won’t take friendly fire when they go boom. 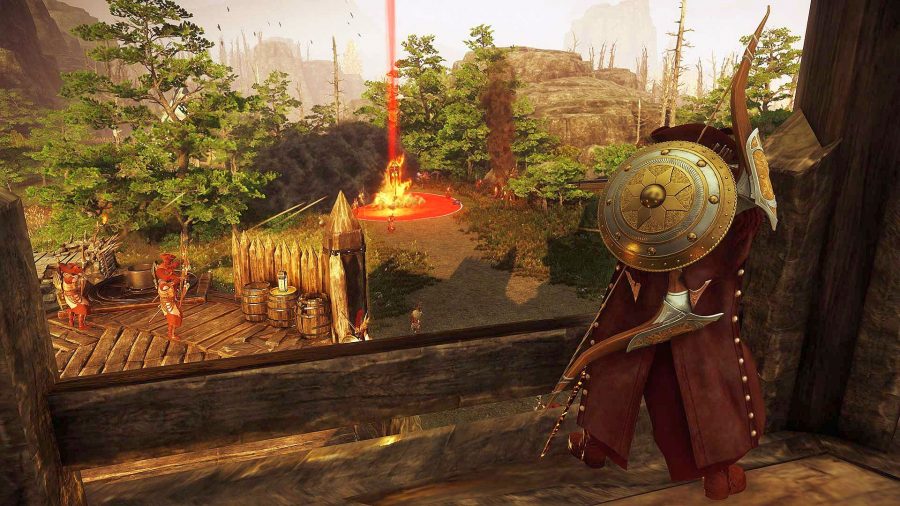 As the gates come tumbling down and the war reaches its zenith, other tricks of the combat trade really come in handy. The ‘Berserker stance’, for example, prevents you from dying for a number of seconds, so in the overwhelming pandemonium of conflict within the fort’s guts, you’ll get a second chance. I also see how New World’s weapon builds can help hone some nifty playstyles. During my session, I witness an attacker using a bow for more than just mid- to long-range kills by taking advantage of a spread shot that fires five arrows at once. Up close, all of those projectiles hit one target, making the weapon capable of clearing out nearby enemy troops fast. It’s an intriguing way to power up a ranged weapon, and hugely effective.

Defenders try desperately to repair the gate as attackers swarm in, using that same life bubble ability to shield their efforts. As you’d expect, the heavier a character’s armour, the more their protection and equip capacity increases, so this is the moment when it’s worth tanking it up as a defender – though if attackers pierce that bubble, the loss of mobility could be devastating.

Close-quarters combat is gritty. Players can essentially ‘lock’ into fights with each other in the field, making it an uninterruptible one-on-one scuffle. While this more or less guarantees being hit by a foe’s swings, they’ll also be susceptible to any dished out. It’s easy to see where that pre-war phase comes in handy – you’ll want to be locked and loaded for when this kind of conflict comes-a-knocking. 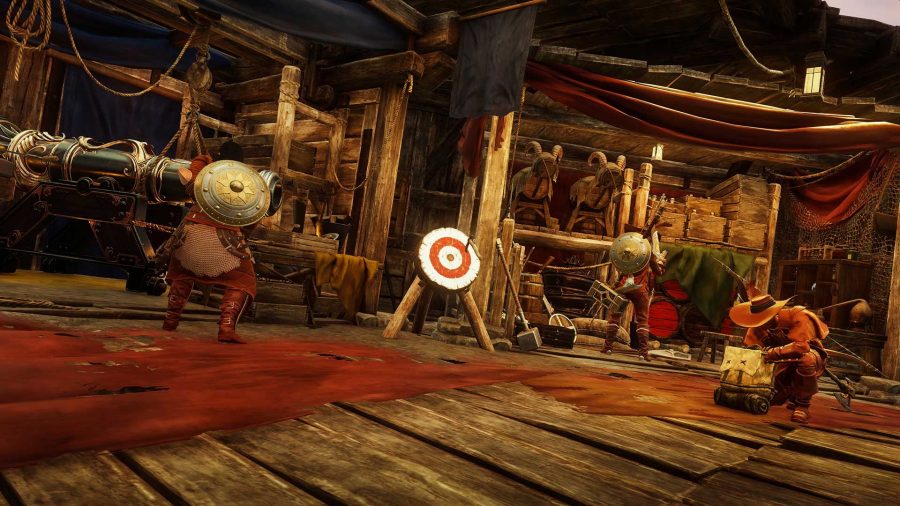 If you prefer to stand back, the fire cannon is great. Planted strategically around the fort’s outskirts, it can be specific enough to pick off hand-selected rivals at long range. It’s also possible to take the occasional trip back to the armoury to pick up more goodies and equipment, spend tokens, and beef up a team’s arsenal of siege weapons.

The territory's capture remains for another day. Back to a non-warring portion of Aeternum for another adventure

In the heat of the fray, the timer ticks down the war’s final three minutes. It’s clear the battle’s outcome is going to go down to the wire, as the remaining troops drop all semblance of finesse, thrashing it out as the fort’s capture hangs in the balance. The attackers throw the kitchen sink at the battle, but the last few seconds run out and the defenders are declared victorious. The territory’s capture remains for another day, and it’s back (automatically) to a non-warring portion of Aeternum for another adventure. Or a foamy consolation brew at one of the quality drinking establishments that must surely be tucked away in one of its settlements.

My prevailing impression of New World’s war mode is of its full-blooded, unrelenting fun. It seems to capture the flurry and madness of 18th Century conflict on the ground, with hearty dollops of magic and some other embellishments thrown in for good measure. The fort’s area is pretty big, so there’s space and time to regroup (if you’re nippy) but the heat of the fray concentrates within its walls, and it’s easy to lose track of the bigger picture while you’re engulfed in the smoke and fire of it all. 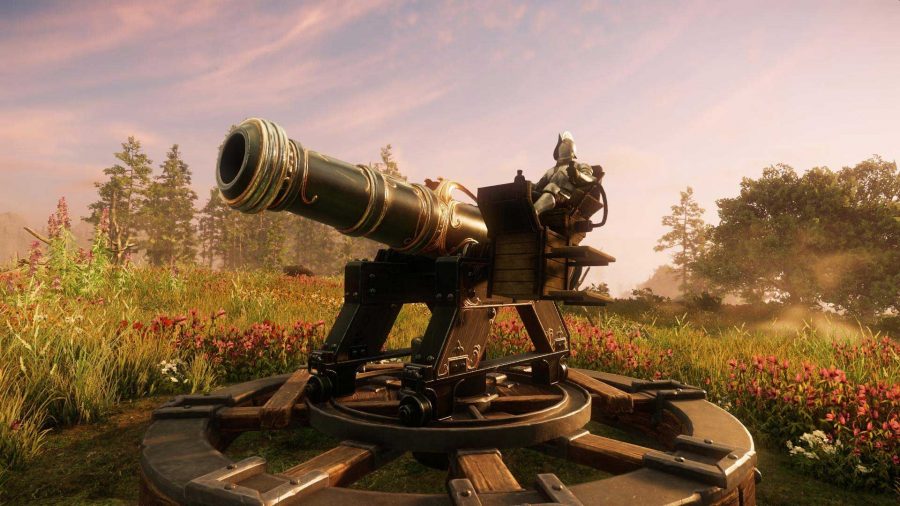 How much variety the wars will offer in the long term is another question, and a difficult one to answer right now, given we’re many months from the game’s (delayed) launch. The blueprint of the fight is exciting, but noticeably structured. The number of capture points and gates, the timer, the phases of war – there’s a rigid foundation upon which the madness plays out. For the MMORPG to achieve long-term success with a PvP-hungry community, it feels like it would benefit from a strong degree or either replayability or variety.

On this point, it seems Amazon is confident New World will deliver. While there’s only one war mode blueprint for now, that content could potentially expand in the future, creative director David Verfaillie explains. And it sounds like the current War mode structure could offer plenty of replayability for a while yet, because of its scale.

Game director Scot Lane adds that he’s been playing War mode for around six months, and hasn’t yet encountered anyone turn one down, due to their replayability. Because they’re 50v50, he explains, there’s pretty much a guarantee that wars will be very different every time players get stuck into one. Whether this is the case, the “largest group of players” so far will get to find out in the New World preview event, which kicks off today at 9:00 PT / 12:00 ET / 17:00 BST, and runs until September 4 at 23:59 PT / September 5 at 2:59 ET / 07:59 BST.