Looking for the best New World weapons? Amazon’s new MMO game eschews the usual class system and gives players the ability to wield any of the game’s eleven weapons freely. As you use a weapon, you gain mastery points in it, which you use to unlock skills and buffs in either of the weapon’s two talent trees. You can choose up to three weapon skills that become available to you when that weapon is equipped, and you have two weapon slots, which you can switch between easily during combat without messing around in menus.

Though you can switch weapons at any point, it pays to choose two to specialise in and invest points into – especially as the skills at the end of each weapon’s talent trees are particularly powerful. Each weapon scales off a specific primary attribute, and some of them also scale off a second attribute. As you level and gain attribute points, it’s important to assign points to suit your chosen loadout.

When deciding which weapons to pick, it’s definitely beneficial if both your weapons scale with the same attributes, although there are ways to get around this – for example, amber gems convert a percentage of your weapon’s damage to nature damage, which scales off Focus. This means if you want to build high Focus for your Life Staff, you can still benefit from that investment when it comes to dealing damage with your other weapon.

It’s also useful to run at least one ranged weapon to catch fleeing or ranged foes. Every New World weapon is viable in both PvP and PvE, although they are best suited to different situations. They also suit different playstyles, so we recommend you try out each weapon to see how you like them. We’ve taken multiple scenarios into account when weighing them up for our New World weapon tier list.

The best New World weapons are: 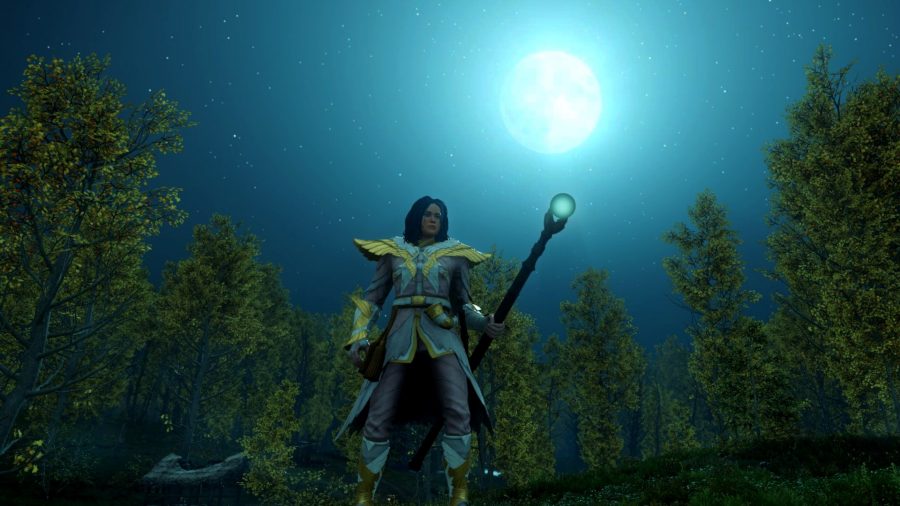 The Life Staff is the only weapon that provides healing. This is, of course, absolutely invaluable in every scenario, from all forms of PvP, to dungeons and levelling. It’s not a particularly damaging weapon, so it’s not great in 1v1 PvP duels, but – as mentioned above – if you’ve specced into Focus, you can slot your secondary weapon with a gem that converts a percentage of its damage into nature damage.

Related: Where to get New World gems and how to use them

We recommend pairing the Life Staff with heavy armour, and a powerful, tanky weapon like the Great Axe, Sword and Shield, or the Hatchet to become ridiculously hard to kill. 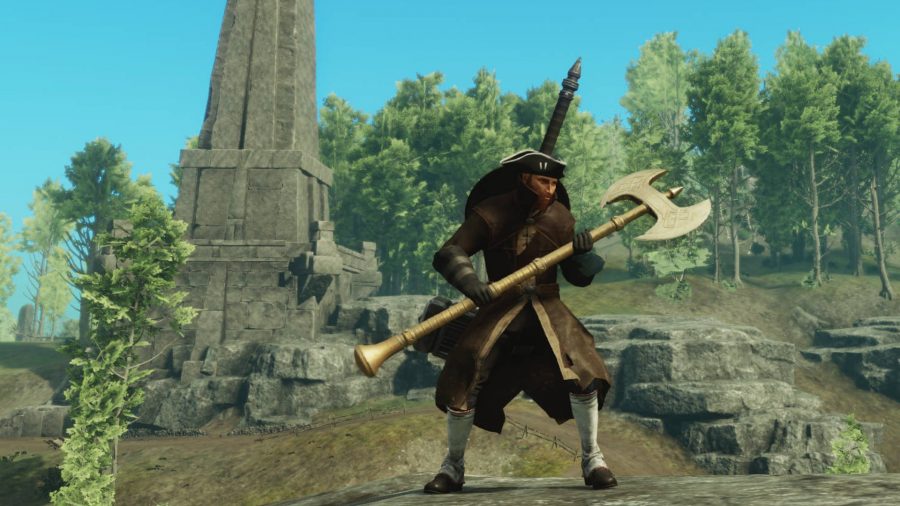 The Great Axe is a formidable two-hander that offers a lot of crowd control, damage, and movement abilities. There was a bug during the closed beta where it dealt double damage, but even without this, the Great Axe excels in many scenarios. It also has superior tracking compared to other melee weapons, meaning you can hit enemies more easily if you’re slightly out of range.

The Gravity Well ability in the Mauler tree is the star of the show here, sucking in groups of enemies and preventing them from escaping. There’s a Charge movement ability in the Reaper tree which is great for gap closing, and the Reap skill in the same tree can also taunt enemies, making it excellent for tanking in dungeons. This makes the Great Axe a good choice for both PvP and facing down groups of foes in PvE, as seen in the best New World Great Axe builds. 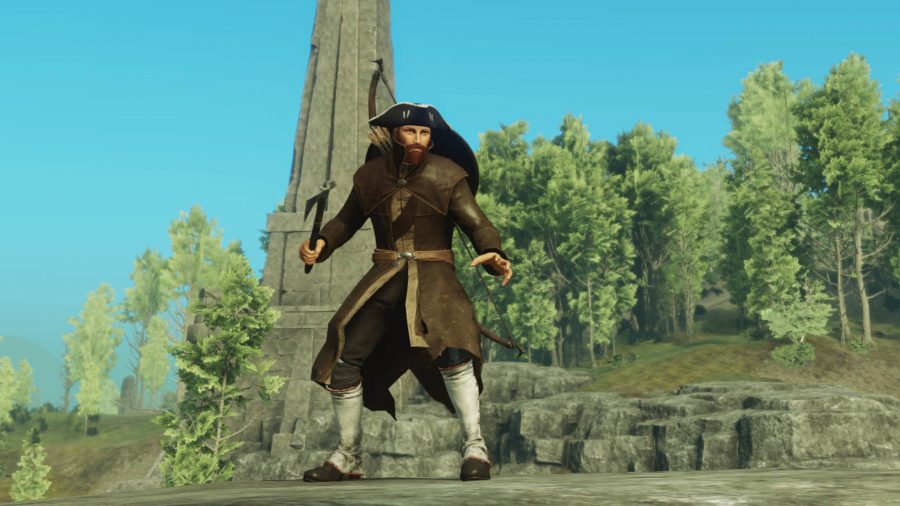 The Hatchet is a strong weapon to add to any loadout, and was the bane of every player in the alpha. Aside from good base damage, the Berserk skill is astonishingly strong, giving you a 20% damage buff, and adding a self-heal at higher levels, allowing you to stay alive for longer. The self-heal is percentage-based, so those with high Constitution perform even better with it.

Provided you use the best New World hatchet builds, this weapon is a great 1v1 PvP weapon – pop Berserk and if your enemies try to run away, use Feral Rush, hit them in the back and root them for two seconds. In the Throwing tree, the Infected Throw reduces targets’ healing ability by 30%, which is the only healing counter in the game. 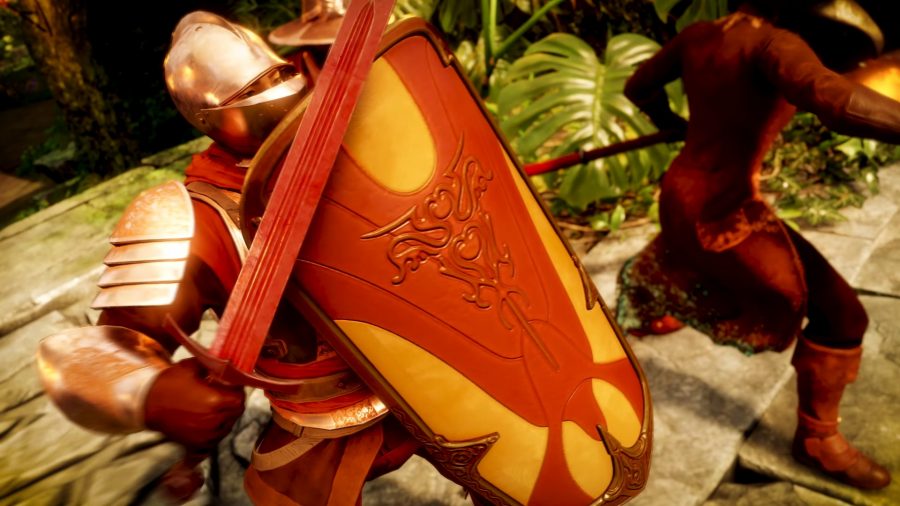 The good ol’ Sword and Board is great for tanking, as you generate lots of threat from blocking. In the beta, many tanks ran it alongside the Life Staff and put plenty of points into Constitution. It’s not the best combination for PvP, but it’s great for dungeons, and could be the weapon to make the best New World tank build. 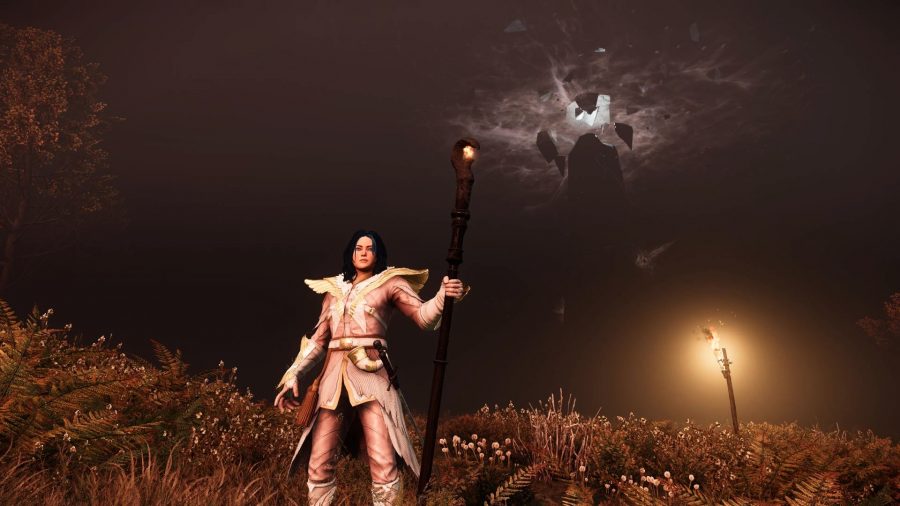 Fancy flinging fireballs at your foes? The Fire Staff excels in large-scale PvP, like wars. Until you level up the fire staff enough to unlock better mana management, it can be a little rough, as you constantly run out of juice. Once you’ve put the time in to unlock all its abilities and constructed the best New World fire staff builds, the staff deals massive amounts of damage. 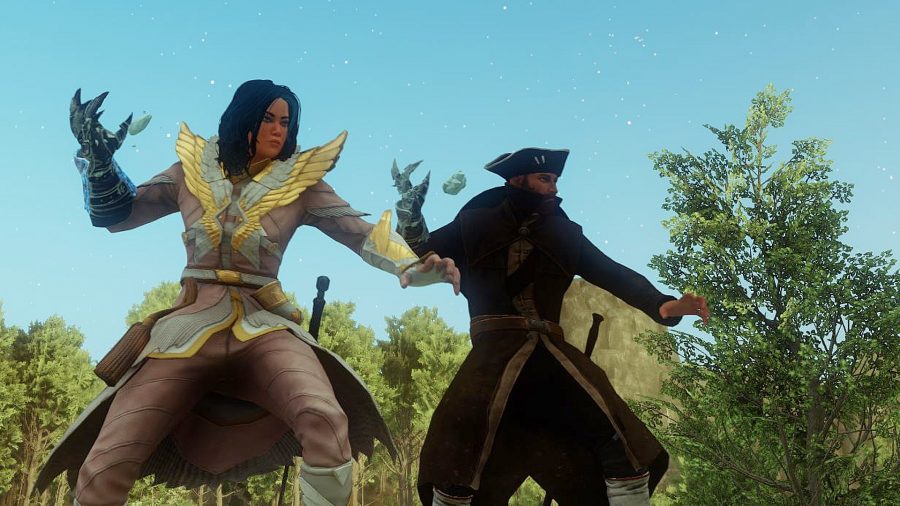 The Ice Gauntlet is a great all-rounder, offering good damage and crowd control. You can use combos to great effect – Ice Shower roots foes for one second and then prevents sprinting and dodging, so you can follow up with Ice Storm to further slow them and deal even more damage. Players have been combining the Ice Gauntlet and Fire Staff to even greater effect in PvP.

Entombed is also a fantastic ability – it makes you invulnerable temporarily and gives you a huge amount of mana regeneration. You can even triumphantly burst out of it and damage enemies around you. 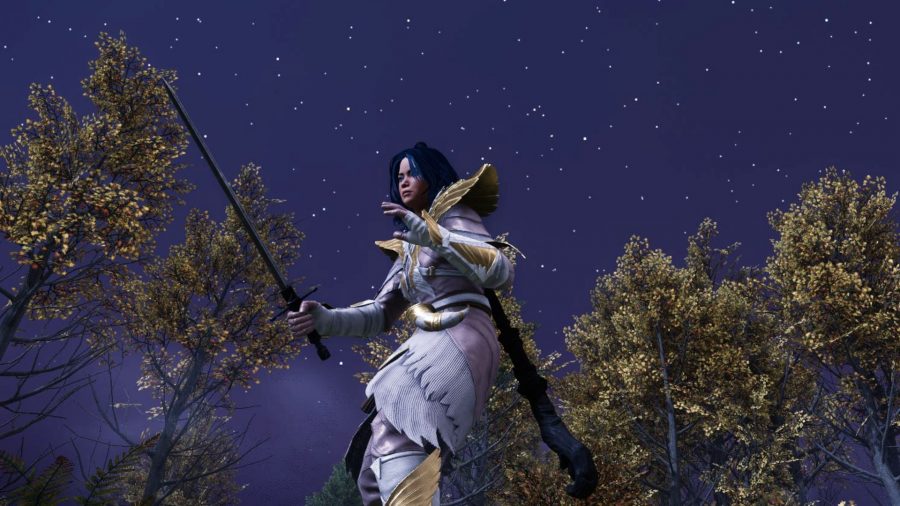 The Rapier specialises in fast, single target damage. Swishing and swooshing your way around is pretty fun, but the bleed tree is a bit underwhelming, so most players will spec into the Grace tree. There’s no crowd control to speak of, but there’s plenty of mobility, with the ability to evade and deflect attacks making this one of the best weapons for defeating foes one-on-one. We have a couple of the best New World rapier builds for if you choose to spec into this weapon. 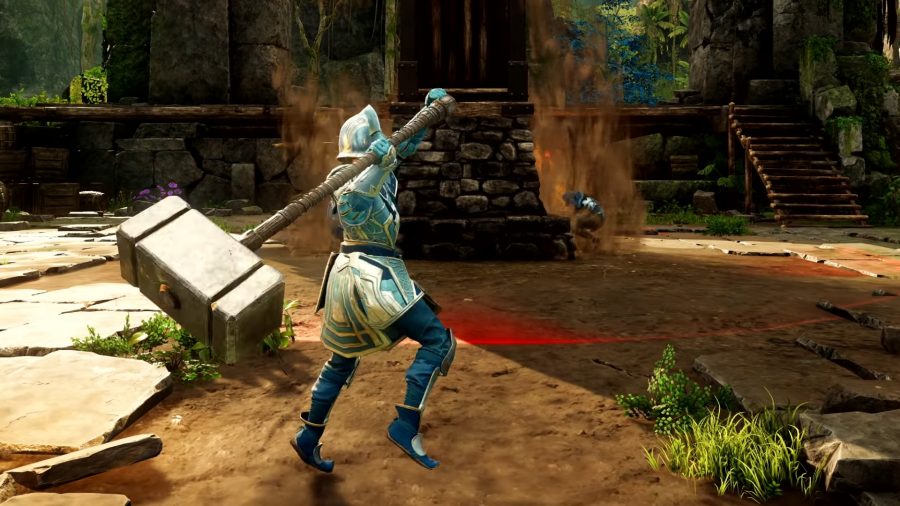 The War Hammer is a relatively slow weapon with no gap closer, but good crowd control. This makes it excellent for PvE, but not particularly well suited to PvP. If you run the War Hammer with a Life Staff, you can solo a ton of PvE content with ease, as you mow down enemies and heal any damage you receive. 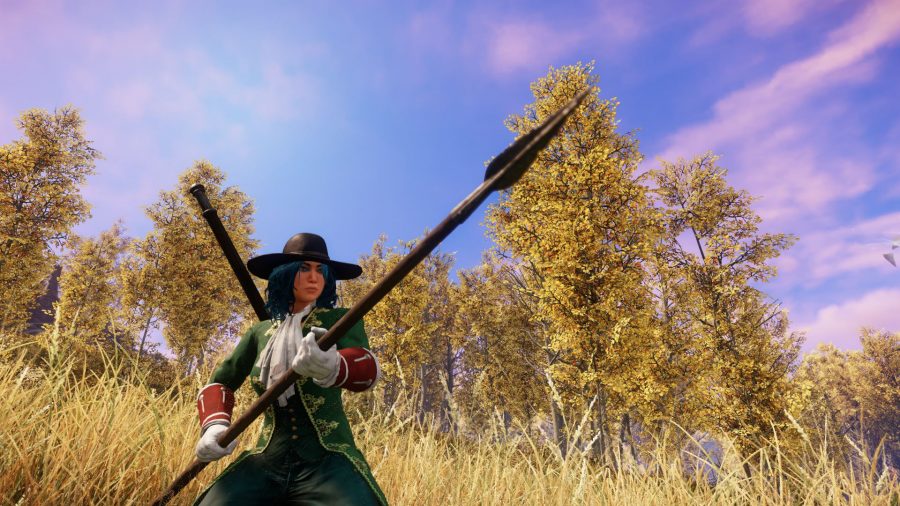 The Spear is notorious for knocking down everything in its path, which is fun in any and all scenarios. It deals decent damage, and has a good stun in Vault Kick. The knockdown, Sweep, can be easy for enemies to dodge in PvP, but if and when you do get ‘em, pairing the Spear with a weapon like the Musket is an excellent combo for finishing them off in a 1v1 situation. 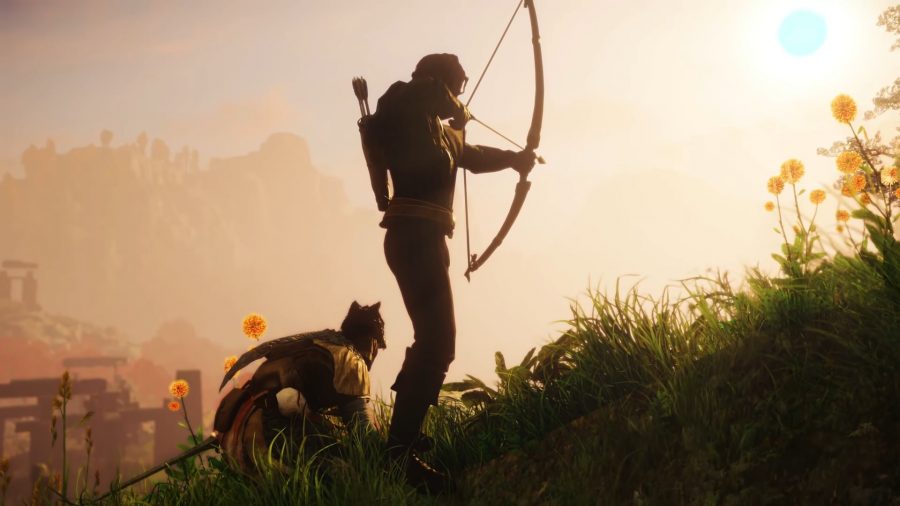 The Bow is decent in large scale PvP, but we like the Musket a little more for that, as it offers more burst damage – the Bow does get the edge when it comes to PvE, however. There are plenty of damaging skills to obliterate foes with, but it can be difficult to hit your projectiles over long distances. 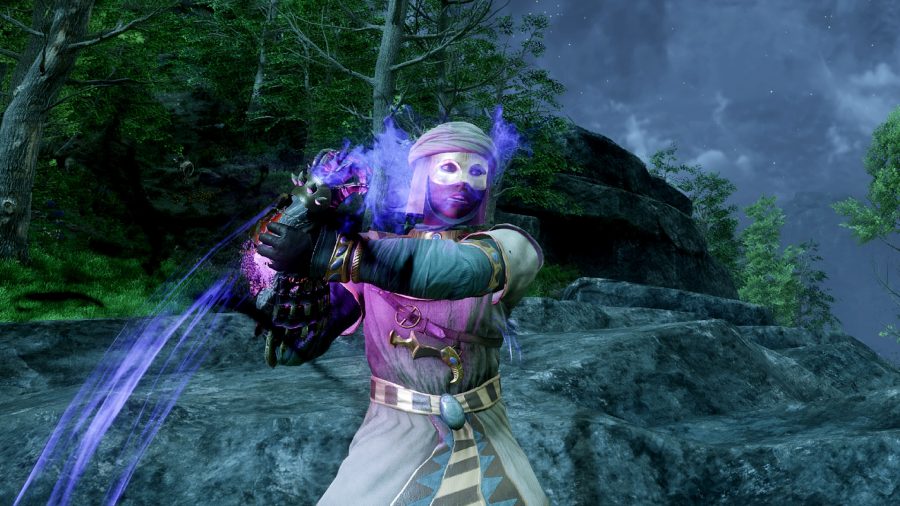 The Void Gauntlet is the newest weapon to arrive in New World – it scales on focus and intelligence, and offers both ranged and melee options, alongside heals and debuffs. It can output a large amount of damage in both PvE and PvP as part of an intelligence-focused build. At the moment, it doesn’t rate highly on our list, but that could change as players develop stronger builds and learn more about the weapon. 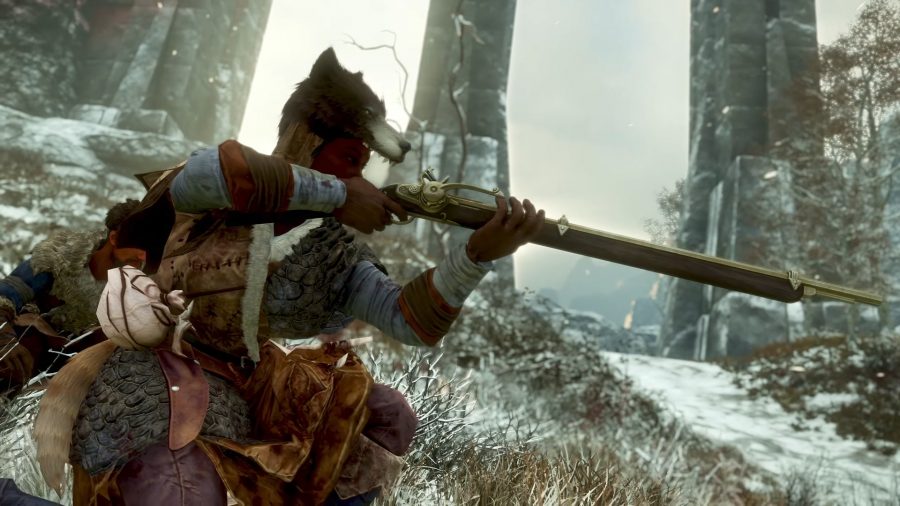 Your experience with the Musket will vary – some players have found it hard to use. It is a hitscan weapon, meaning there’s no need to lead your shots, but you’ll want to hit those headshots consistently to output enough damage. If you’re not capable of doing this, don’t bother. If you’re a good shot, though, the range on the Musket is excellent, and it’s good for group PvP like Wars. The weapon also offers damage-over-time with the Powder Burn skill, and the Traps skill is excellent for keeping foes at bay.

Those are the best New World weapons. If you’re planning to start your adventures in Aeturnum, here’s how to choose your New World faction, and the New World servers available to choose from. We’ve also got a New World beginner’s guide and New World leveling guide to help you out.