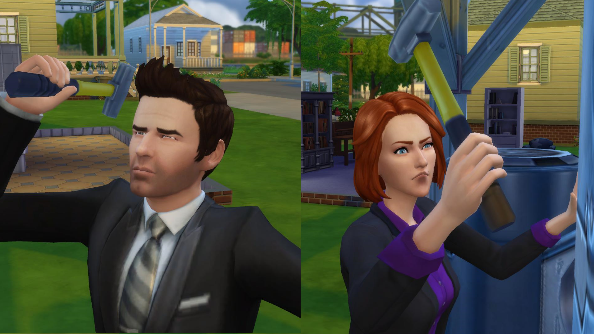 The X-Files eleventh season wrapped up this week and the finale probably marks the end of the show as we know it – series star Gillian Anderson said earlier this year that she won’t be returning to the role of Dana Scully after this season. But The X-Files may still have life in videogames, according to series creator Chris Carter.

Find out what happened when we decided to send Mulder and Scully into space in The Sims 4.

PC Gamer points to a lengthy interview Carter did with fan site X-Files News. In it, Carter discusses the arc of season 11 and the generally poor reaction to the finale. He also describes the episode’s concluding scenes as being “not the end of something, [it’s] the beginning of something.”

For the television show at least, it probably is the end – The X-Files without Scully and Fox Mulder would be a very different show. But Carter says there’s a game currently in development, one that’s narrative-based and could take up the paranormal torch.

“I made a joke the other day about The X-Files, the musical, but in reality, they’re actually making a really interesting narrative video game, different from the one that’s been launched already,” Carter told XFN. “Different approaches to X-Files story telling. So we’ll see.”

As PC Gamer observes, the existing game is most likely The X-Files: Deep State, which is a hidden-object game. What Carter means by “narrative game” is anybody’s guess, but here’s hoping it helps bring some closure to fans disappointed by the show’s apparent conclusion.