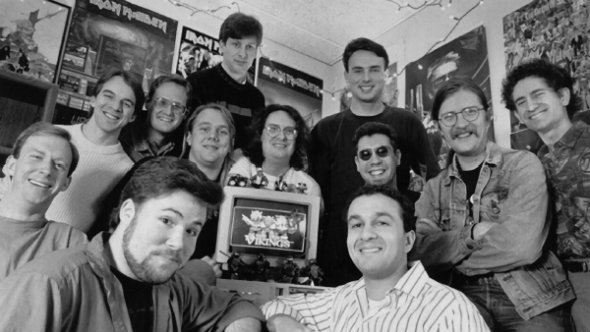 Allen Adham, one of the original co-founders of Blizzard Entertainment, will be responsible for bringing promising new projects into reality as executive producer of incubation within the company.

Catch up on the latest Blizzard announcements from their annual bash, BlizzCon 2016.

Earlier this month, we heard that Allen Adham was rejoining Blizzard,the company he helped to found, after 12 years away. During that time their staff has grown tenfold and added several major games to their portfolio, which consisted of only World of Warcraft and StarCraft II when Adham left.

Now we know more about Adham’s role, courtesy of a Polygon piece for which he and his fellow co-founders Frank Pearce and Mike Morhaime were consulted. Adham’s official title is senior vice president, but Morhaime and Pearce also call him “executive producer of incubation”. His job is to make sure that new projects happen.

“I’m at the centre of the process by which we start up new titles and incubate new ideas”, he says. “I have Mike and Frank to thank for that, but I skip to work every day.”

Pearce explains that Blizzard had an urgent need for such a role. “We are so spread thin in terms of resources to achieve even the current initiatives that we’re trying to pursue,” he says. “It’s very difficult for us to kick off and start new ideas and new projects. I don’t think we’d be able to find someone to focus on incubating new ideas that we just hired off the street, that hadn’t worked here before. To be able to bring in someone that we trusted, that had a passion for exploring new ideas – it was a really good opportunity for us.”

With a number of big names from its past having recentlydeparted, retired, orchanged roles, and the successful launch of new properties such as Overwatch – for which the studio has big plans – Blizzard could be said to be entering a new era. Morhaime and Pearce say eSports, new platforms – including mobile – and an experimental attitude to new projects will be key as Blizzard look to grow their audience. Adham’s role in this will be crucial, but he’s cagey with the details.

“You don’t know me too well, but I have a pretty big mouth and get pretty excited,” he says. “I’ve been coached not to say too much, especially given the role that I’m in. So, I’ll just leave it at: We are working on a bunch of cool new stuff.”

Teased by Pearce and Morhaime about whether hiring him was a good idea, Adham says: “In a couple years, you’ll all know whether or not it was a good decision.” Imaginative readers might like to theorise that this is a tease of a release window for Blizzard’s next IP launch.