Total War games have staked a perennial spot on our list of the best strategy games on PC.

These will be a new class of historical Total War game, focused on ‘powder keg’ moments in history, when the course of the world was decided in a short sliver of time and space – such as, in CA’s words: “civil wars, renowned conquests, and political upheavals.”

We hear each will be comparable in scope and focus to Shogun II’s standalone Fall of the Samurai DLC, which dealt with the fall of Japan’s last feudal Shogunate (the Bakumatsu period) and its replacement by Emperor Meiji’s modernising government. Obviously, it focused entirely on Japan and lasted roughly 15 years, with five Imperialist and five Shogunist factions to choose from.

The first Total War Saga will launch before the next major historical release in the franchise, and will continue on from Rome II and Attila. Attila’s DLC included the Goths, the fall of Rome, and Charlemagne, so we’re guessing we can rule out any associated conflicts. There was plenty else going on in the early medieval period, though, from the unification of England to the Battle of Hastings. 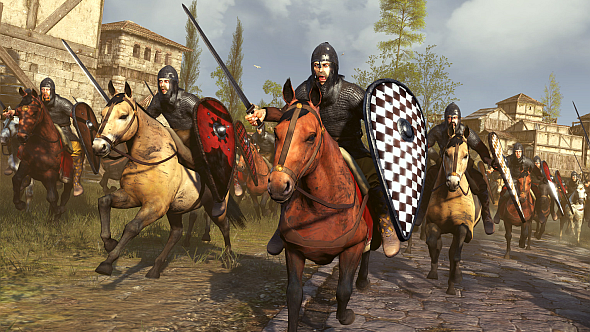 The announcement on CA’s blog says each Saga will play just like a main sequence Total War game, with “the same turn-based campaign strategy, real-time battle tactics and hundreds if not thousands of hours of gameplay as a regular Total War game, but focussed down on a distinct moment…

“The game that I’m currently working on has a map that is comparable in gameplay size to Total War: Attila, but focused on a smaller geographic area, and the campaign will take as long to complete as any other Total War title.”

They won’t introduce new eras or revolutionary ideas, but will relate to previous Total War titles. “There’s an almost endless list of possibilities,” Jack Lusted says, who will direct the first Saga. Expect a formal reveal “in the next few months.”

History fans, are you stoked? What do you want to see from a Total War Saga? Check out the video above for our ideas. Personally, I’ve got every extremity crossed for the Wars of the Roses.

Lusted will be streaming live on the Total War channel at 15:00 BST (in one hour) to talk more about the announcement. You can catch that here: