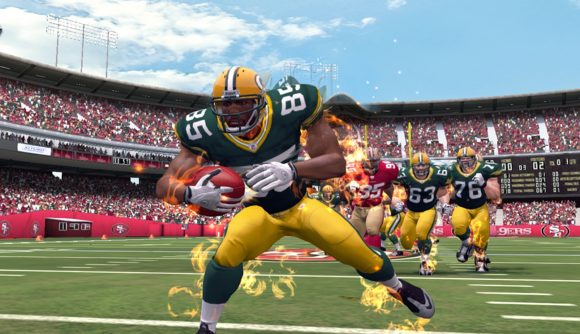 Back in the mid-2000s, Madden wasn’t the only NFL game on the market. Now, one of EA’s biggest former rivals is back in the game of making official football games, as the National Football League has announced a new partnership with 2K to produce “non-simulation football game experiences.”

The first of these games is in early development and scheduled to launch in 2021, but that’s the only detail available right now. 2K says in a press release that “specific game titles, developers, and release dates will be announced at a later date.” EA still has exclusive rights to produce simulation-style NFL games, so don’t expect a direct competitor for Madden any time soon.

EA says in a statement provided to Polygon that “our agreements have always allowed for non-exclusive development of non-simulation games on various platforms,” noting that the company’s agreement with the NFL is unchanged. However, the original exclusivity agreement, from 2004, did include arcade, management, and simulation games alike – as Polygon notes, the agreement had already been revised some length of time before today’s announcement.

2K made a simulation-style NFL 2K series throughout the early 2000s, which was critically well-regarded and priced aggressively against Madden – but that series was brought to an abrupt end when EA picked up the exclusive rights for NFL videogames.

That’s mostly resulted in Madden games, though EA did pick up the Blitz name from Midway and released a new NFL Blitz in 2012. It didn’t gain the traction of its classic predecessors, though it did garner decent reviews.

For now, you can check out a big list of football games on PC and – oh, wait. I’ve just been informed that I am, in fact, writing for a site based in the UK and it’s not that kind of football. Still, they’re there to tide you over if you need some more non-EA sports action.