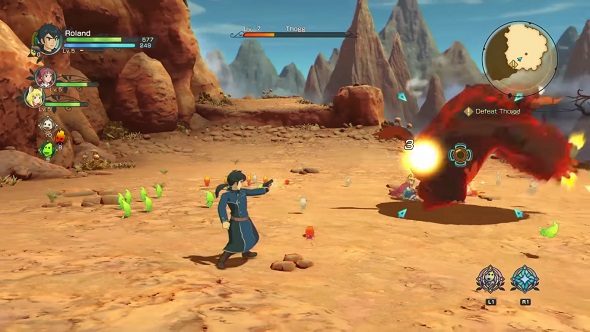 While the game may be less half way done according to reports, Bandai Namco and Level 5 are starting to release more details on Ni no Kuni II. In this new trailer, we finally get a glimpse of the reformed combat system for the sequel to this JRPG, designed with the help of Studio Ghibli.

Want more grand adventures? These PC RPGs may be what you need.

The main change to Ni no Kuni II’s combat system is the loss of familiars. In the original Ni no Kuni, protagonist Olly could catch and train up special familiars to fight in battle. While the monster designs were fairly creative, the actual combat was pretty dull and drew attention away from the main cast of characters who merely acted as supports during a fight. As much, the familiars have been cut from the sequel and have been replaced with Higgledies.

These merry spirits are the manifestation of the heart and can align with earth, fire, water, or wind. They act similarly to Pikmin, clinging onto enemies and attacking them to aid your party in battle. While they seem to act independently, you can order them to attack specific targets through a special command window. They can also do large elemental attacks, like summoning a tornado or unleashing a large pillar of fire to scorch an enemy. Higgledies can also help in the field, as their powers can be used to get round certain obstacles. Need to smash a boulder? Earth Higgledies will take care of it. Can’t cross a gap? The wind Higgledies will launch you across with a mini tornado.

By looking at the battle screen, it seems that you can get more Higgledies to help you out in battle. As Higgledies can be conjured from the hearts of people, animals and even elements, you’ll probably acquire more from doing side quests or finding them in dungeons.

The combat is certainly more action packed than the original, with less emphasis on menu based spellcasting and more active battling. Rather than going into a menu to select a spell, players can open up a window to select attacks from a hotbar, while still battling with a foe. As the speed of the combat was one of the major complaints from the first Ni no Kuni, it’s good to see that Bandai Namco and Level 5 are looking to increase the speed of this installment.