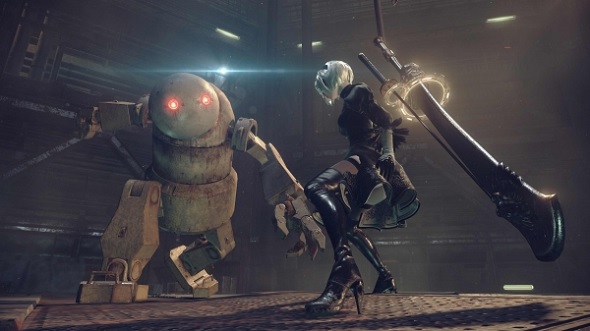 Nier: Automata Become as Gods Edition was just announced at E3 2018. It looks like the game is largely a Game of the Year edition set up, as it will include previously released DLC – the 3C3C1D119440927 expansion (what a name), for cosmetic skins, and one mask accessory.

A trailer that was revealed at the conference had little to show of Nier: Automata Become as Gods beyond footage you’ll already have seen from the game itself. We do know that the edition will come to the Microsoft store on June 26, but there’s no direct confirmation of a new PC release of the game at this point.

Nier: Automata showing up at the conference wasn’t much of a surprise, but what is surprising is that we didn’t see anything new – Platinum has already said that it’s working on a new project, and Automata’s producer, Yosuke Saito, teased that Yoko Taro would probably be involved in a new Nier game. On top of that, the team have been hiring for a new game in the series.

Nier: Automata has also sold more than 3 million copies as of this month, meaning it was a pretty safe bet that Square Enix would look to capitalise on the series’ new found success once again.

You can check out the new trailer below.

While Square Enix didn’t have any new Nier to show off, they did have two new games. Babylon’s Fall‘s release date is due in 2019, while we’ll learn more about The Quiet Man in August. Overall though, it was a conference surprisingly light on anything I’d deem particularly new, especially since Square Enix has Life is Strange 2, The Avengers project, and, most importantly, more Nier in the works.