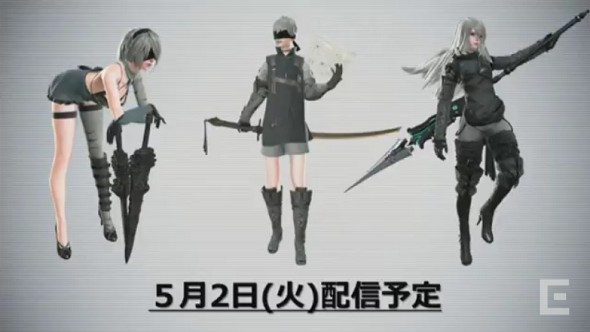 Update April 24, 2017: we now know the Western release date of Nier: Automata’s first DLC. It’s the same as the Japanese one.

Acclaimed JRPG Nier: Automata is getting its first injection of DLC in a little over a week. Snappily titled ‘3C3C1D119440927’, and thus self-condemned to be better-known as ‘the bunch of stupid digits DLC’, it’ll be available through Steam on May 2.

For future hits, check our list of upcoming PC games.

The stupid digits DLC will add three colosseums with new challenges – including a fight against the CEO of Square Enix, who attacks by shooting images of his own face at you. Sure.

New side quests will offer various rewards, such as:

Nier: Automata has now sold over a million units worldwide. For more details of the stupid digits DLC, plus another video, check out our coverage of its original Japense announcement (below).

Original story April 17, 2017:Nier: Automata’s upcoming DLC has been shown off in a Japanese livestream. Accessible via in-game NPCs who guard locked elevators, the DLC transports players to an all-new combat arena where fresh threats reside.

Just what are those new threats? Well, the ones who have been shown are Yosuke Matsuda, CEO of Square Enix, and PlatinumGames president, Kenichi Sato. Each of them descends from the sky and fires out projectiles of their own faces. Yes.

What’s the point of all this? Well, there’s a Nier-inspired outfit for 2B, 9S, and A2 to unlock and wear. 2B’s is based on Kaine’s outfit from the original Neir, so she’s running around with her entire arse out now. Yes.

My oh my. #NieR pic.twitter.com/3RkIDc4z9f

The outfits and the new area should be arriving on May 2 in Japan. We’ll update when we know the western release date.