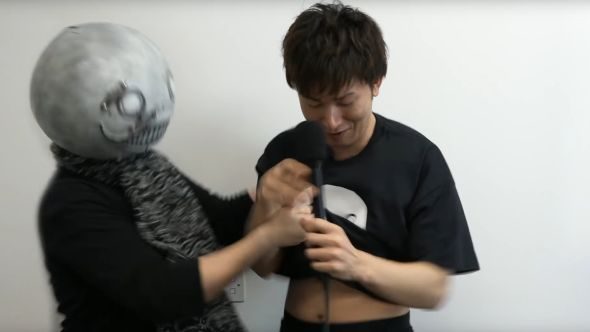 Nier: Automata’s moon helmet-wearing director, Yoko Taro, is an eccentric fellow. He also makes some very strange games because of that eccentricity. The first Nier has a hell of a cult following thanks to its novelty, and many of its fans are excited about the upcoming release of Nier: Automata. Taro, however, says to not expect too much.

Keep an eye on the future with our upcoming PC games list.

Over on the PlayStation Blog, Taro says he wrote the original Nier thinking it would be his last game. He was getting sick of the structure of the company he worked at. Nier wasn’t exactly a financial success, but it went on to gather a sizeable cult following. While its action wasn’t great, people fell in love with its story and characters.

With PlatinumGames developing the action in Automata and Taro working on the story, expectations among fans are stratospheric. Taro doesn’t want you to get your hopes up too much, though.

“Everyone at PlatinumGames who developed this game respected the previous title and created a spectacular game for us,” he said. “I was in charge of the scenario, but it’s all poop so I don’t want you to expect too much from it.”

He’s such a character. Anyway, who’s ready for the poop? Nier: Automata releases for PC on March 17.