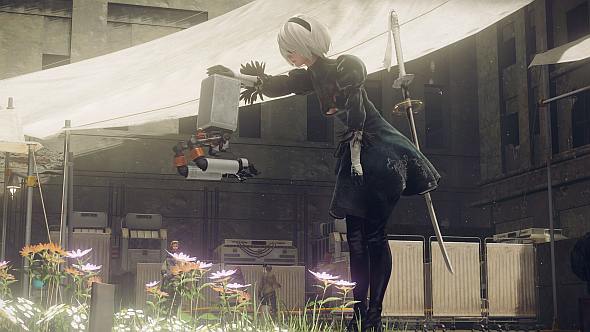 A year on from Nier: Automata’s release, director Yoko Taro reveals that there is still one last secret for players to uncover.

Nier: Automata’s chipset upgrades made our best game mechanics of 2017.

Nicknamed “Automata’s final secret”, the team were hesitant to spoil it, saying “going into any further detail might cause some problems”. Unsurprisingly, there’s a tonne of discussion online about what this ‘final secret’ could be or whether it even exists at all. Yoko Taro has a reputation for his trolling nature, something he is quite aware of, “I made the proposal thinking it would be good if everyone suffered.”

Whether the ‘final secret’ is something simple to be found within the game or a whole new ending is unknown (that could be a reasonable thing to hope for with Nier: Automata – the game has many endings, and some of them are small goofy jokes).

Later in the interview, a trick was revealed that allows players to interact with the camera. By holding down R3 and using the d-pad, you can zoom the camera in and out. However, the developers say this will cause issues with topography and bug the camera. Who knows, maybe this is part of the secret to solving the mystery.