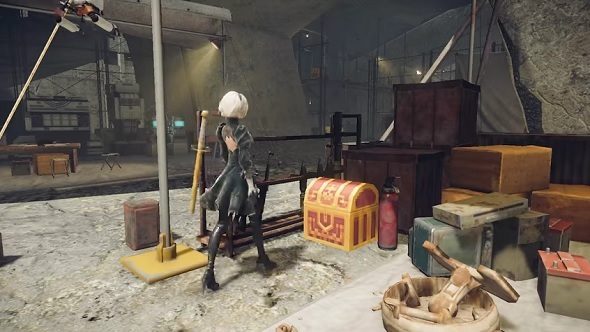 Coming out of Jump Festa 2016 in Japan, Square Enix’s futuristic android smashing action-RPG, Nier: Automata just got a brand new trailer. Set 5525 years in the future after an apocalyptic event which forces the majority of humanity off Earth, Nier:Automata sees you playing as the human’s last robotic hope to drive back mechanical invaders from another planet.

If role-playing is your thing, check out some of the PC’s best RPGs.

To help with the fast paced action combat, Square Enix has drafted in the masters of the spectacle fighter, Platinum Games, to help design the battle system and keep it running at top speed. In some clips in the trailer, you can see how the graphics have taken a hit but this is to ensure that Nier: Automata is constantly running at 60fps.

Besides reaffirming the Japanese console release date of February 23, the main draw of this trailer is that Nier: Automata will features some famous weapons from other Square Enix franchises. Noctis’ Engine Blade from Final Fantasy XV will be equippable, as well as the Cypress Stick from the Dragon Quest franchise. While the Engine Blade looks like your typical dieselpunk sword, the Cypress Stick causes slight graphical changes when equipped, with chests looking like the ones found in Dragon Quest and damage numbers using the Dragon Quest font.

While these are all great Easter eggs for JRPG fans, it still does not answer the question of when Nier: Automata is coming to PC. A demo is coming to console on December 22, but there has been no news if PC players will also get to play this snippet of the full game as well. Initial reports from Square Enix stated that the PC version was set to release on the same day as console, but that claim has since been taken back with no other information forthcoming.

With Nier: Automata set to release in the West on March 7, Square Enix needs to step into gear and confirm a release date for PC players before fans start to lose hope.