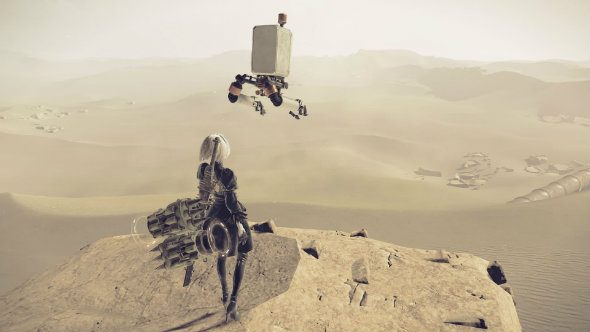 Update April 26, 2017: After Nier: Automata’s strong sales, we reached out to Square Enix for an update on the possibility of a Nier remaster.

So, you may remember that back in January, Nier: Automata’s producer Yosuke Saito said “there is a very high possibility” of a remaster or re-release of the original Nier, if Nier: Automata sold “like hotcakes” (see original story, below).

While economists have yet to agree a precise figure for what would constitute hotcake-like sales, we thought it’d be worthwhile to check in with Nier publishers Square Enix after the recent news that Nier: Automata has sold a million copies. That sounds fairly hotcakey to us, though we acknowledge the debate is unsettled and rancorous. Here’s a statement from Saito himself:

“We are currently considering all options on what we will be working on next, but we have no plans in place at the moment.

“Whatever our next step is, I would love to work with same team members again but securing their schedule may be the hardest thing right now.”

So they’ve yet to decide, but it sounds like it’s still a possibility.

Update January 30, 2017:A previous version of this story attributed the remaster quote to Yoko Taro, but it was actually the game’s producer, Yosuke Saito.

Square Enix just hosted a live Q&A with eccentric Nier creator Yoko Taro, Platinum Games designer Takahisa Taura, and producer Yosuke Saito, who hinted at the possibility of a remaster of the original game. Thing is, we all have to buy Nier: Automata first.

“Is there a possibility of a Nier Remaster or Re-Release?” asked a fan on Facebook. “There is a very high possibility if Nier: Automata sells like hotcakes, yes,” replied Yosuke Saito.

Elsewhere, the creator, Yoko Taro, also said the game will take around 25 hours to get “the true ending”, though there will be multiple endings and they won’t be unlocked in the same way as they were in the first game. “You’ll have to figure out how to get them on your own,” he teased.

For completionists, it’ll be around 55 to 60 hours of game.

Automata will also span genres. The demo on PS4 already shows that it’s happy to switch between being a fully 3D character-action game to playing like a side-scroller, but there will also be other genres in there.

The first game had a text adventure section, and it looks like there will be one in this, too. “Yoko-san had to put in another text adventure just because people hated the first one,” said Platinum Games designer Takahisa Taura.

Yoko Taro is known for his eccentricity. In the Nier: Automata demo on PS4, you can get a ‘game over’ screen by unequipping an item. It’s your android’s central system, and its item description does warn you that removal means death. Of course, you have to try it anyway.

You can sum up his personality by one of his Q&A quotes. When asked towards the end if he had a message for fans, Yoko replied: “I wouldn’t expect too much from this game if I were you.” What a guy.

As for news on the PC version, he was tight-lipped. “We’re working hard on it, but if I said anything, ninjas from [Square Enix] would try to kill me, so I’ve got nothing to announce,” Takahisa Taura joked.