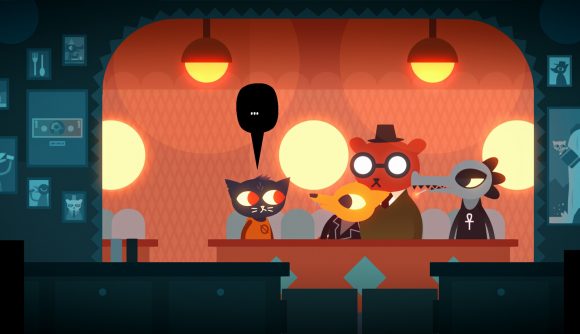 Night in the Woods launched just over two years ago, and it was a surprising delight – as delightful as a game about the malaise and decay of Middle America is able to be, anyway, and it still sits amid our list of the best indie games on PC. Today, several of the developers involved with the game have announced their next set of projects, as part of a new studio called The Glory Society.

The Glory Society is founded by Scott Benson and Bethany Hockenberry, two of the three co-creators of Night in the Woods, and they’ll be joined by artist and musician Wren Farren. The studio will be a worker’s cooperative – which essentially means everyone’s equally invested in the studio and there are no formal bosses calling the shots.

The studio has two projects in mind, according to a series of tweets. We’ll hear “about one sooner and one way later.” There’s little detail beyond that, but the developers do say that “both are going to be pretty cool,” and that a more formal announcement will come “when we’re good and ready.” (For now, I’ll just note that the logo treatment on the official site is very Night in the Woods-esque.)

Another key member of the Night in the Woods team is Alec Holowka, and he’s working on a separate project currently operating under the name #ProjectPotato.

The official Night in the Woods account tweeted about both projects, along with the note “don’t worry, we’re all still working together on NITW things here and there. And we’re all good pals. And we’re all gonna make rad stuff.”

So if you’re a Night in the Woods fan, you’ve got three new game projects and some number of “NITW things” to look out for. It’s a good time for crimes.