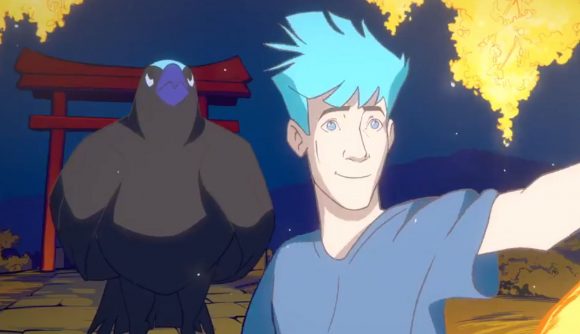 I imagine it’s a little tricky to create reliable advertising around PC peripherals. I don’t wish to sound ignorant here, but in many cases, a gaming mouse is a gaming mouse, and outside of some flashy promo shots, there’s likely not much else you can show off. So why not have some fun with it?

That’s certainly the direction that Finalmouse has taken on its latest promotion, which sees Fortnite streamer Tyler ‘Ninja’ Blevins team up with his new mouse. You see, in the trailer, which you can check out below, Ninja’s mouse transforms into a giant bird in a video clearly very heavily inspired by Japanese animation.

While playing games in his home (which evokes Japanese architecture and sits atop a hill overlooking a beautiful azure seascape) Ninja’s mouse turns into an enormous corvid and flies out the window. The pair then fly off in a ghibli-inspired montage, before Ninja passes through a spiritual Shinto gate and lays his hand on a cherry blossom tree, promptly bathing the rest of the forest in golden light.

It’s worth pointing out here that both Ninja and Finalmouse refer to the events of the trailer, below (via PCGamer), as “based on a true story.”

“Valley of the Air” – Based on a true story.

This is the story of how we discovered the truth alongside @ninja and finally bridged two worlds.

On December 1st we will share this truth with you in person and shift the consciousness.

RT for a chance to be flown out to the popup pic.twitter.com/3XfxVn1uYr

Finalmouse are clearly trying to get pretty deep with this one, referring to the trailer as “the story of how we discovered the truth alongside Ninja and finally bridged two worlds.” I’m also amused by the fact that this isn’t even the full reveal – at no point is the new product actually shown. In fact, this is just a promo for an announcement due to take place at a pop-up in Los Angeles.

Whatever the item is had better live up to the hype – Finalmouse describe their new product as “a museum piece,” and talk about its “utter sexuality.” They also seem to suggest that their actual reveal event would be mobbed by riotous hardware fans if they revealed it now. The company says that “on December 1st we will share this truth with you in person and shift the consciousness.” That’s a lot to ask of a simple gaming mouse, but if nothing else, I’m glad that they had the gall to put this video together.