Update September 16, 2016: President of Sony’s Worldwide Studios, Shuhei Yoshida, has spoken up on the controversy surrounding No Man’s Sky and its perceived lack of promised features, saying he understands some of the criticisms.

During the Tokyo Game Show, Yoshida said the blame was at least partly down to Hello Games’ pre-release PR strategy and how it built up unrealistic expectations.

“I understand some of the criticisms especially Sean Murray is getting,” Yoshida said in an interview with Eurogamer, “because he sounded like he was promising more features in the game from day one.

“It wasn’t a great PR strategy, because he didn’t have a PR person helping him, and in the end he is an indie developer. But he says their plan is to continue to develop No Man’s Sky features and such, and I’m looking forward to continuing to play the game.”

Yoshida also said that personally he “really enjoyed” playing No Man’s Sky, but he could understand others not feeling the same. While I agree that the messaging was partly to blame, it does feel like Sony are throwing Murray under a bus a bit here. After all, they were supposed to be helping with marketing, so they could have helped shape that message.

Either way, the whole thing has been extremely messy and it’s not wonder Murray and the Hello Games account have been silent on Twitter for around a month. If anyone’s due a break from the internet, it’s these guys.

Update August 10, 2016:Sean Murray has tweeted about the pair of players that met in No Man’s Sky without being able to see each other, saying it’s incredible.

No Man’s Sky creator Sean Murray has commented on the two players that met each other, streamed it, but couldn’t see each other. He doesn’t say why not, or what the “online features” he mentions are, or whether they’re working. 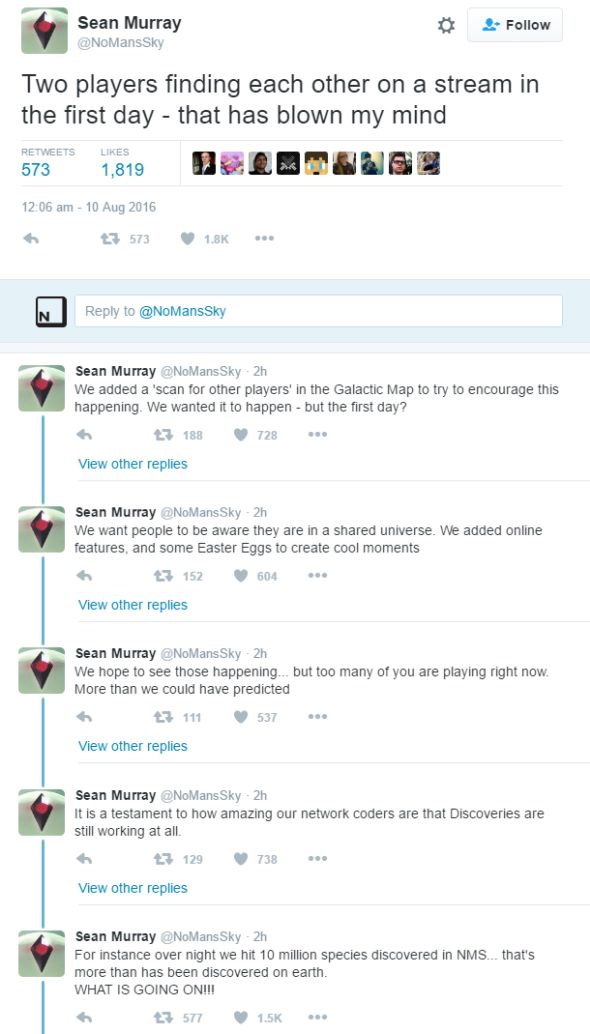 It’s not a particularly satisfying explanation for confused fans. Murray doesn’t directly say why the players couldn’t see each other, or what the features he’s teasing actually are.

The implication is that the number of people using the servers is overwhelming certain systems. While there haven’t been any widespread complaints – and if we’ve learned anything over the past few years, it’s that everyone finds out when there are server issues in new games – it’s possible that server instancing that would allow players to see each other is silently not working in the background. Think about how dodgy the multiplayer messages and soapstone signs can be upon the release of a Dark Souls game, without actually impacting your experience in a noticable way.

Sadly, the pair who met up on Twitch didn’t have archiving on, so we can’t analyse the footage for any more answers. Hopefully Sean Murray or Hello Games are planning a longer explanation of exactly what the online elements of the game are. Today brings the official release date of the game in Europe, so we can only expect player numbers to go up. We’re guessing it sold pretty well, at least.

In the mean time, the community is continuing to express their displeasure, including making videos like this, bringing together all the times Sean Murray has mentioned multiplayer in regards to No Man’s Sky:

There are also those more sympathetic, like Reddit poster Halo_Jumper_3 who explains all the ways the servers could be breaking. More still are simply getting on with enjoying the game, and the most popular post on the subreddit on day one is a post explaining you can take proper screenshots on the PS4.

We’re contacting Hello Games for comment on all this.

Original story August 9, 2016:People have been extremely confused about No Man’s Sky. Speaking about the game on Twitter today, I’ve had people messaging to say they didn’t even realise it was a survival game. Another point of uncertainty is multiplayer, and whether players can meet up in this vast space. For many, the game is still a mystery.

Two streamers may have finally put it to rest, meeting up on a planet in the middle of the universe and realising that they couldn’t see each other. Here’s a picture of the scene, and the associated Reddit thread.They met up at the same time, but the time of day on the planet is different for both players, suggesting that everyone is placed in a separate instance.

This flies in the face of what Hello Games boss Sean Murray has been communicating. While he has consistently said it’s not a multiplayer experience, he’s always said that’s a issue born from the enormous distances separating players.

“People keep asking us about multiplayer and I think when people see this they are going to fully realise what it means to be that far away from somebody else who’s playing,” Sean Murray told GameInformer in 2014.

“People keep saying to us, ‘Yeah, but what if I knew where they were? Would I go there?’ And it’s like, yeah, but they are going to have to stay there for quite a while while you get over there. And then once you get over there you might land on the same planet and then you will say, ‘I’m on a planet the size of Earth and I am on a mountain. Where are you?’ Which is, I know, a weird thing and it’s a daunting thing.”

In the video below (from 2:40), Murray says multiplayer isn’t a focus and meeting another player would be “incredibly rare” and “might never happen”. When pressed, he backtracks a bit, saying: “That’s not really what the game is about. When you talk about multiplayer, it just gives people the wrong impression.It’s not what we’re trying to build and it’s not what people should be thinking about going into the game.”

This was from March this year.

Just yesterday Murray responded to multiplayer questions once more, via his Twitter, reiterating that the distances are so vast that bumping into another player is highly unlikely.

The chances of two players ever crossing paths in a universe this large is pretty much zero.

Now before you get out the pitchforks, it’s worth noting that this could be some kind of bug, or perhaps it’s an issue that hasn’t been ironed out just yet. But still, there’s a clear problem with the messaging here.

Another notable detail is how your character has no physical form – not even arms – suggesting you control a floating camera and a gun. You can also pause the game, which is usually a no-no in a shared universe. Just look at Elite: Dangerous.

This could perhaps be down to instancing, which grabs players from nearby and puts you in the same lobby. Perhaps these two players were placed in a different instance, hence the different times of the day. Back to that GameInformer interview, Murray did expand on instancing a bit.

“The only answer that I can think of for this is a really technical one,” Murray says. “If we were to make a game where we synchronised every player, what they were doing with every other player, then that would be impossible and no one has ever done that. What we can do is, like many games that you have at the moment, where you are flying around with an open lobby. People are coming into that lobby and leaving it – like if you play Watch Dogs or something like that.

“Effectively, we have players joining your discrete space. We’re not trying to make an MMO where you can play with literally 60,000 people on screen. We handle the case like where other people can fly past in your game or that you can bump into other players in the game.

“But that’s okay for us because it will never happen. I guess the whole of the entire community could organise to go to one specific spot and then they would find that they weren’t all there at the same time. That would be ridiculous.”

When asked how many people can be in a lobby at one time, Murray won’t give a definitive answer: “The lobby that you carry around with you now can, it’s almost like I don’t wanna say because people will just test it, it can carry a few people. More than what you will see during the normal course of the game.

“Just to be really clear, the reason that I’m saying this is we just want to be really clear with people that it is not an MMO. All of those questions are leading toward that. There are loads of MMOs out there. People can play those. We want people to be able to get a sense of playing with other people and to see other people and feel like this is a real, live universe.

“If you’re thinking, ‘Okay, okay, I understand all of that, Sean, but let’s say all my friends want to go and play together.’ That’s not what this is about. You’ve seen the galactic map. I don’t want to disappoint people. I don’t want to answer your question and then they will think, “Yeah, yeah, he’s saying it’s difficult, but I’ll do it. And then we will play Destiny together, effectively. We will all run around the planets.”

“No. If you want to play a first-person-shooter-sci-fi-run-around-on-a-planet game, play Destiny. It’s a really good game. Go play that. We’re not trying to do that.

“Like Journey multiplayer, that was a huge part of the game for me, but they did a good job in not describing it as a multiplayer game. Journey would have been really disappointing if you entered into it thinking it was a multiplayer game. It’s not. Dark Souls I think of as a single-player experience, but I’m really glad of the elements that they have in there.”

With two players doing something that Sean Murray himself said was almost impossible on the first day, no doubt we will soon find out what’s going on beneath the surface of No Man’s Sky’s shared universe. Never underestimate the speed of a gaming community in overturning secrets.