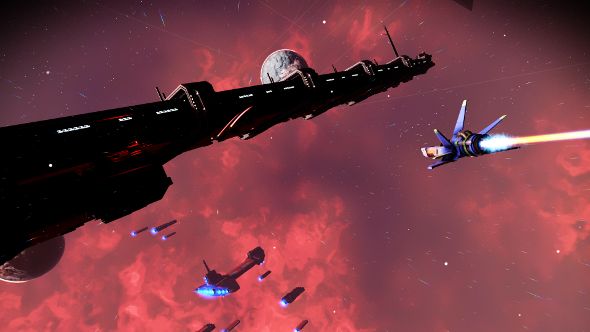 When No Man’s Sky launched last year, it was as gorgeous and atmospheric as it was hollow and dull; a game that was perfect for some mindless relaxation, but not the space sim it at first appeared to be. Hello Games haven’t left it to rot, however, and it’s been fattened up with a bunch of beefy updates that add a slew of new features.

Remind yourself how things were at launch with our No Man’s Sky PC review.

I’ve popped back to wherever I parked my spaceship (thank goodness I don’t need to find my keys) to see if it’s worth another visit.

During development, one question kept being asked: what actually is No Man’s Sky? At launch, the answer remained unclear. It dipped its toe into the survival and crafting genre, walking sims and space sims, but it never really committed. Each facet was half-baked. 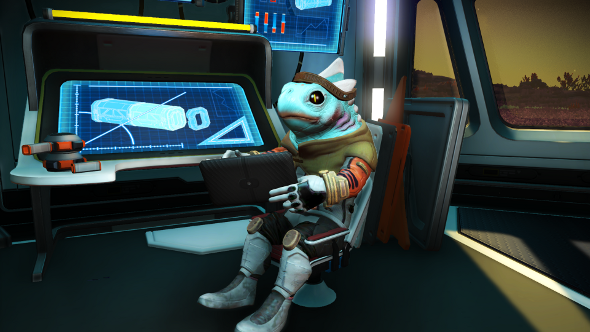 Survival lacked any of the tension that’s normally associated with games like DayZ or Don’t Starve, there were few interesting things to craft, and hunting down resources quickly became a slog. The universe itself was too static and under-developed for a space sim, as was the mindless combat. And there wasn’t all that much to do on the gazillion planets, making it a pretty dreary walking simulator, albeit on a grand scale.

Through the Foundation and Path Finder updates, Hello Games have reevaluated, tweaked and added to every single one of these facets, lavishing so much stuff onto the game that they could very well have been paid DLC and it wouldn’t have seemed strange. Though it would have undoubtedly caused a lot of gnashing of teeth and ranting and raving, mostly in the always enlightening pit of despair known as Steam customer reviews.

Construction is the headline addition. Elaborate bases can be stitched together from a multitude of components, from large rooms and functional bits of tech to fancy decorative items that make these sci-fi compounds feel lived-in. Slapping everything together is easy, with parts snapping into place, then connecting rooms and corridors or creating towers that you can slap a flag on top of to feel really important. 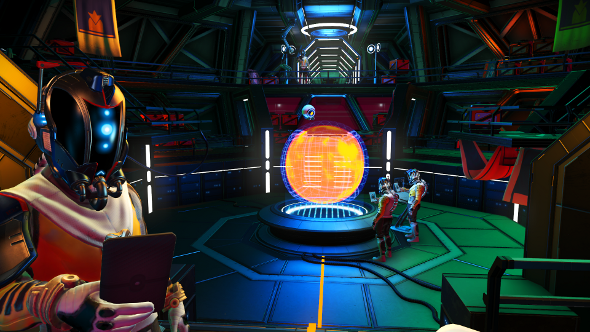 The building editor is simultaneously simple and ripe for experimentation, getting those creative juices flowing without forcing you to worry about too much faffing. Buildings serve a practical purpose, too, eschewing the aimlessness that previously cursed the game. Importantly, they make planets feel more permanent, since you can plonk a teleporter down and always head back there whenever you want. And they can also house a whole host of new alien and robotic pals to hang out with. Friends! At last!

My alien buds are only friends with me because they work for me, but you’ve got to take what you can in this cold, heartless universe. See, the technical stations I’ve been fixing to my base require a specialist to function, and these workers can be invited to join this worthy endeavour by visiting the space stations where they congregate to play cards and collect their dole. When put to work, they give out blueprints that expand the list of things that can be built, as well as offering quests that make exploration more meaningful.

I’ve found myself getting excited when I found specific biomes, eager to go hunting for the resources that my base needs to flourish. It feels like progress in a way that simply surviving or working to find fuel for my ship just so I can continue my shallow journey across the stars never did. Each new station I add to my base, each new blueprint I discover, puts me one step closer to self-sufficiency. With farms I’m earning more money and generating helpful resources, with vehicles I’m speeding across worlds and mining without having to worry about dangerous storms or hazardous atmospheres, and with my landing pad I can always ensure that I have new visitors with stuff to trade. 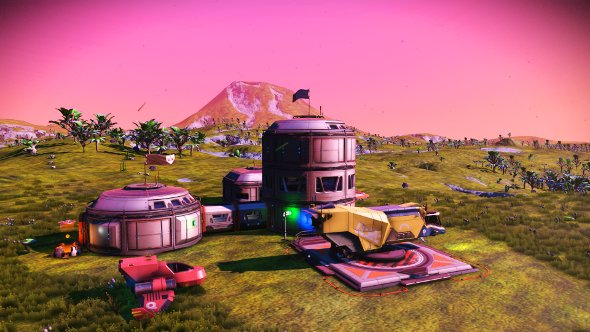 I can’t understate how handy these vehicles are. Exploring on foot in No Man’s Sky is a terrible slog. It’s far too slow when the worlds are so massive and largely devoid of interesting things, requiring you to hoof it back to the ship whenever you want to actually get anywhere. The problem with that is ships are terrible for planetary exploration as their scanners only pick up buildings and points of interest, not resources. Lots of time is wasted jumping in and out of them, as well as plutonium, which gets gobbled up every time the ship takes off.

Getting some sexy wheels solves that problem. Not only are they faster and safer, they can be fitted with long-range scanners, weapons, mining lasers and other components that make them more effective. Exploration becomes fun again, rather than a frustrating slog. Another patch is expected to appear soon that will allow you to use vehicles on any planet, but in the meantime you can only use them on your homeworld, where you’ve constructed a base.

However! Reaching that point where things stop being a pain in the arse takes a bit of time. There are so many new resources and blueprints that it can be a bit bewildering, and if, like me, you’ve already spent a lot of time with No Man’s Sky, it can be a bit dull going around and gathering everything you need to start feeling like you’re making progress. Thankfully, there’s a creative mode (along with dreadful survival and permadeath modes that just make everything harder without making it more interesting) that strips out all danger as well as resource gathering, so it’s possible to just go wild and start building whatever one’s heart desires. 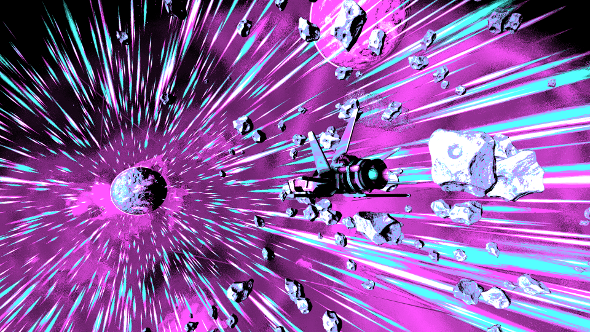 Space has been similarly improved. Ship choice matters now, thank goodness. Vessels have both classes and quality ratings, determining the role they are suited for, like hauling cargo and fighting, and how good they are at doing that. So there’s a reason to hunt down new ships beyond the size of their cargo bays, and conveniently it’s possible to own more than one.

There’s a new type of vessel, too: the freighter. These are incredibly expensive, incredibly massive behemoths that can be purchased and summoned when more inventory space is required, and they can be customised as well. There’s something a bit thrilling about docking with such a gargantuan vessel, navigating its massive corridors, and then going ‘Yes, I’m going to buy this huge bastard’. It takes a lot of work to be able to afford them, however.

Becoming a bounty hunter is still a pretty superficial experience, unfortunately. If you’ve fought one pirate, you’ve fought them all. There’s not an ounce of nuance to the combat, and there’s nothing more annoying that being forced into a battle for the hundredth time. Even with the more combat-focused vessels, it continues to feel like a hassle rather than a viable path. It’s a shame, too, because it sort of makes fighters a bit pointless. Why would you flit around in a tiny ship with only a small cargo hold just to fight the same battles over and over again?

Other issues persist, too. The universe still feels static without proper factions, and the overarching Atlas objective and the search for the centre of the galaxy continue to be utterly hollow experiences that over no reasons to engage with. And while the procedural generation has improved, creating more colourful worlds with greater diversity, it’s not quite there yet. They’re still largely simple and familiar. I don’t even think that improving the algorithm that generates the topography is really the key here. They are often geographically bland, sure, but the bigger problem is that, beyond hunting for resources and laughing at stupid alien beasties, there’s not a lot to do on them. I’m pretty tired of the monoliths and abandoned buildings and manufacturing facilities and crave something more thrilling, or at least intriguing. 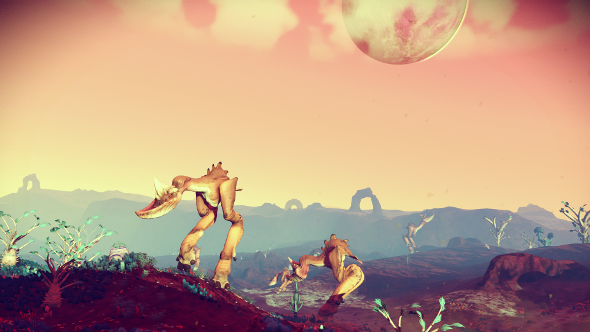 Still, No Man’s Sky has undeniably come a long way since August. It’s genuinely impressive, the amount of new features that have found their way into the game. It’s evocative of Early Access, not because it’s unpolished or buggy, but because there’s been this explosion of new systems and bold changes – a feeling that it’s still growing and evolving. And like an Early Access title, it still seems like it’s waiting for something to tie it all together. There’s an important piece that’s still missing. What that piece is isn’t obvious. It could be a better, clearer, narrative, a more reactive universe, proper factions – but there definitely needs to be something to serve as the glue.

In the meantime, there’s the photo mode. And I’m not being facetious here – photo mode is flipping brilliant. Every game should have it, but No Man’s Sky in particular benefits from it a great deal. It’s a striking game already, and the powerful camera tool enhances it dramatically with a big list of filters, the ability to tweak things like fog and cloud coverage as well as the time of day. Even the position of the sun can be fiddled with. It’s brilliant and, honestly, I’ve probably spent just as much time taking snaps as I have building my base. Photo Mode of The Year.