Beyond, a ginormous new update for Hello Games’ indie adventure title No Man’s Sky, is just around the corner. It’s made up of three key facets, bringing VR support, a “radical new social and multiplayer experience”, and so, so much more in a version 2.0 package that will expand the game’s horizons far beyond what many might have imagined three years ago at launch. With the No Man’s Sky: Beyond release date fast approaching, I got a chance to chat with game director Sean Murray and experience some of what lies Beyond in VR.

Strapped into the headset and handed the controls, I was launched into the game’s familiar tutorial stage – you know, the one that sees you awaken on a mysterious, procedurally generated planet to fix your sadly afflicted spacecraft using anything and everything you can zap with your multi-tool.

My planet was glorious in VR. I looked around, even behind me, at a snowy, wintry landscape gleaming white and dotted with carbon-rich fir trees. The main clues I was not in deepest Norway were the alienesque big cats sloping by occasionally – and my poor spaceship spraying sparks of unhealth, of course. It may sound a little trite, but the sense of really being there, first-person, in this strange place, was captivating and overwhelming all at once.

Any concerns I had about VR-induced queasiness were quickly allayed, as the motion was seamless and easily controlled – as is common in VR adventure games, you teleport freely between fixed points. Murray told me before the demo that it’s a “big longform experience, which is something that you don’t normally see in VR” but that “we’ve kind of tailored it for something that you hopefully feel comfortable playing for many hours.”

The controls were intuitive and pretty smooth. I stretched out my (virtually) gloved hands and everything I needed was at my fingertips. Tap the back of your left hand and a quick-access screen for your inventory pops up. Reach behind your shoulders for your scanner or multi-tool. Pull the right trigger to blast objects into resources. Even in your ship’s cockpit, you grab a green-lit handle to your side and pull upwards to raise the canopy and climb out, as just makes sense.

The controls are designed to ignore accidental pressure, a dev tells me, so you have to be quite deliberate with your actions. It means I can’t be too casual about browsing my hand-menu or equipping my multi-tool, which slows down crafting a little, but it’s easy enough to get the hang of. Murray tells me that all the control mechanics and user interfaces have been redone for VR, and the results are good.

What’s more, because of the game’s sci-fi setting, everything the VR system presents just fits in context. The glowing, futuristic screens popping up in my cockpit, my helmet’s scanner readings delicately highlighting much-needed resources in my field of view – it all makes total, streamlined sense, and adds just that extra level of immersion to my experience. 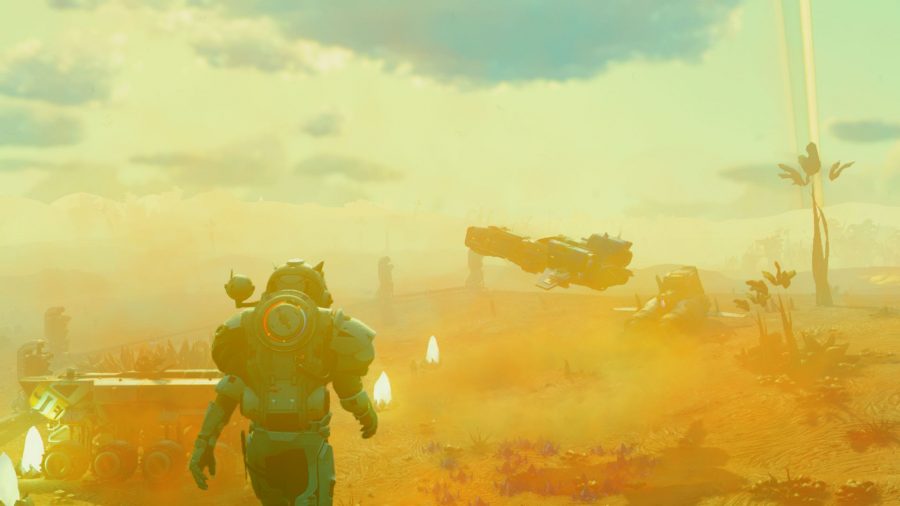 Most intriguing of all, I also got to witness some of the “radical” social multiplayer elements that Beyond will bring to the game. Murray tells me that No Man’s Sky is about to become something sort of like an MMO, though he is keen to resist many connotations of that genre and hedges with the phrase “a lot of multiplayer”. Each planet will be sharded, with a population of up to 32 players (on PC – numbers will vary by platform) per shard. When you land on a planet you’ll be brought seamlessly into a shard with available space.

To me, it fits; the cool thing about sci-fi is it's many different things

I got to try this in the tutorial, and was struck by how it changed the mood. I was flanked by a small group of fellow strandees, each with their own broken starships lined up next to mine. I was, as before, a tiny human stuck on a strange planet, engulfed by the vast isolation of it all – and I really got that. But a sense of companionship and camaraderie also flourished, as our little stranded community set about fixing our ships.

Though darkened helmets obscured our faces, I could wave goofily to them – which I absolutely did – and they could wave back (with the expression preset if not using VR themselves). In one peculiar moment I looked up from inspecting each and every detail of the spaceship’s updated interior, to see one of my group sat happily on its ‘bonnet’, just chilling. It added something really special to the game – the sense that, yes, the universe is vast and overwhelming, but here I was in a little team of explorers who were going to take it on together. 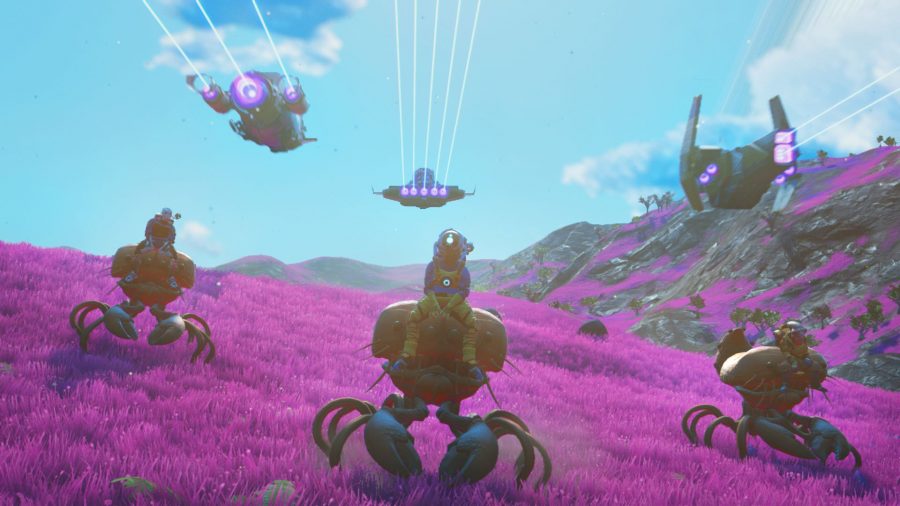 But what about Sean Murray’s original vision for the game, that sense of loneliness he previously told me he wanted to evoke for No Man’s Sky players? How could that be compatible with this new social overhaul? I asked him, and he said “the cool thing about sci-fi is that sci-fi is lots of different things. It’s that feeling, if you’re watching 2001: [A Space Odyssey] – which is one of my favourite films – there are those moments, but there’s also going back to the space station, and seeing loads of people, and sharing your stories, and going off on adventures together.

“To me, it fits. It’s all part of sci-fi. I look at that [Beyond] trailer and I can see, sure, it’s hitting maybe more of the Star Wars-y elements than the 2001 or whatever, but those things can exist in the same universe. You can go definitely go have those weird moments on your own, but then it almost lightens it and creates that variety. If you are just having that lonely, weird experience you’re going to tire of it eventually. So, it’s nice to have these moments of contrast in amongst it.”

Murray says Beyond will bring a summonable social space called the Nexus which, among many other features, will offer community missions. These will sometimes send players to the same planet to tackle objectives together, and you’ll be able to really see and engage with others on a new level without having to actively ‘join’ the same game. You can even set up a kind of “fireteam” with them, keeping you together as a group, though he advised that that term, popularised by modern military jargon (and Destiny), was a bit “too masculine and aggressive for our nice gentle, ambient game.” From just the short demo I had, I could see how these new multiplayer offerings would be a harmonious addition to No Man’s Sky. 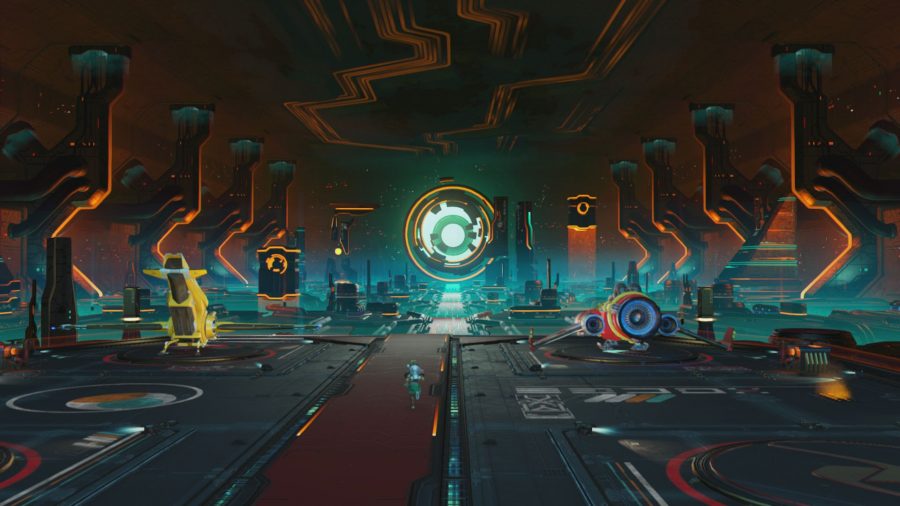 Fittingly, I ended my experience of Beyond by blasting off into space, ready for my next adventure. It’s a shame I put it down not long after, because flight is where VR really comes into its own – there’s a satisfying near-tangibility to the throttle and joystick in the reworked cockpit. The controls take a bit of care, as the joystick’s pretty responsive, but you can ‘snap’ your hand to the throttle for convenience and a bit of stability.

My launch into space really summed up what No Man’s Sky’s incoming mega-update will bring to the game next week. I was filled with a sense of excitement, immersion, and just a lot of fun, with my new pals and I showcasing some serious ‘doughnutting’ skills through an asteroid cluster as I hurtled towards the next planet – and Beyond.